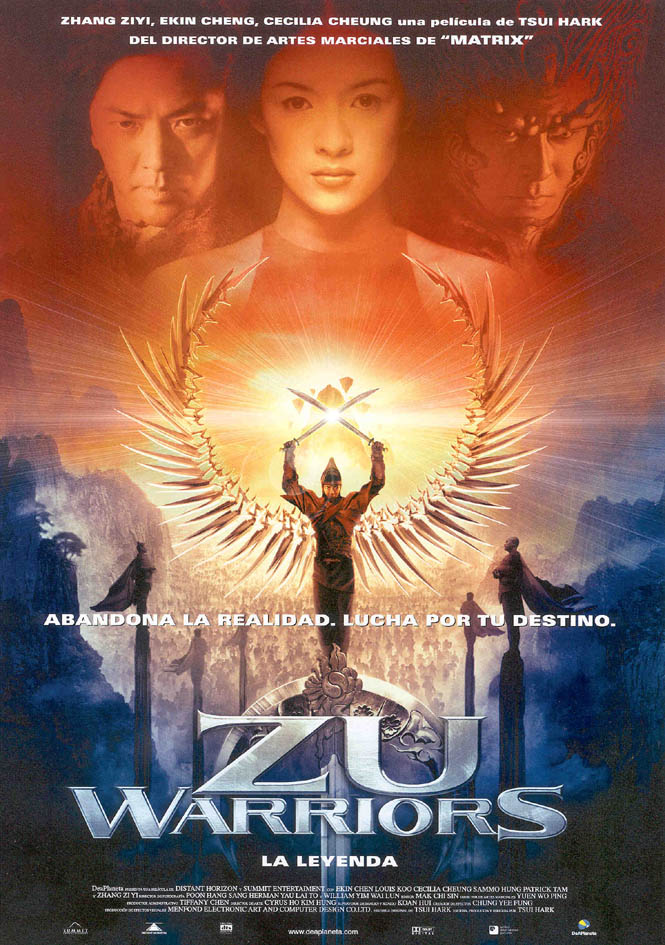 The setting is the mythical world of Zu, where immortals train for centuries to perfect their martial arts skills. One day, a pupil named King Sky (Ekin Cheng) is sent away by his master Dawn (Cecilia Cheung) just before an evil force destroys her. Centuries later, King Sky teams up with Red (Louis Koo) and White Eyebrows (Sammo Hung Kam-Bo) to confront the force, which now threatens all of Zu. King Sky meets Enigma, who is the reincarnation of Dawn. Red keeps watch over a mountain where the evil is gestating, but he is bedeviled by a tiny pixie that eventually possesses him, turning him evil. White Eyebrows instructs his followers to merge the Thunder and Sky swords into one invincible weapon, but the attempt fails. Then White Eyebrows tells King Sky that he has the ability to merge three great powers that will defeat the evil; only this does not work, so it’s back to merging the two magic swords, which finally succeeds, enabling victory.
If the plot synopsis sounds goofy…well, it certainly is. The story consists mostly of White Eyebrows, King Sky, and other warriors talking about ways to vanquish the evil. Of course, these plans fail until the film has reached feature length; then the final attempt succeeds – not for any particular dramatic reason, but just because the film has to end sometime. The result is not only interminable but also pretentious: the dialogue – which affects an air of deep profundity – sounds like a metaphysical version of the techno-babble that used to mar STAR TREK: THE NEXT GENERATION and the subsequent series. We are really supposed to believe that some kind of philosophical message is being delivered.


Hong Kong fantasy films may not be renowned for their plotting, but usually they were involving, thanks to the wildy romantic subplots woven into the melodrama. Here, the romance registers as barely a flicker. King Sky’s discovering of Enigma (the reincarnation of his master, Dawn) barely registers. Additionally, Ziyi Zhang (CROUCHING TIGER, HIDDEN DRAGON) shows up as a mortal who joins the fight; she is set up as if to play an important emotional part in the proceedings, but it never pays off in any important way. The only relationship that strikes any sparks is the one between Red and the evil pixie, who fools him into dropping his guard; too bad it is just a prelude to morphing Red into an evil version of himself
Perhaps the biggest disappointment is the action. Hark’s productions were always noted for their kinetic thrills, achieved through clever combinations of martial arts choreography, wire stunt-work, and fast-paced editing. Although Yuen Woo-ping (THE MATRIX, et all) is back to supervise the fight scenes, most of the action consists of characters flying back and forth between various mountains, and most of the fighting consists of actors standing around looking alternately grim or determined while the special effects do the work for them. Only once or twice does the film come alive with the old verve, particularly in a nice battle near the end, which emphasizes traditional techniques instead of computer-generated imagery.
ZU WARRIORS is one of the most beautiful films ever made. The CGI does create a magical world, and the live-action photography perfectly compliments the fantasy creation. This is a film wherein light shades the cast in delicate hues, suggesting a masterpiece of fine art; unfortunately, the superficial beauty cannot imbue the characters with the soul sorely lacking in the script, and the director’s lethargic staging traps the actors into standing around looking glorious, never allowing them to bring any life to their roles. It is hard to imagine how the creator of some of the best cinefantastique ever, could have failed so badly this time out.

After Sony Pictures’ success with CROUCHING TIGER, HIDDEN DRAGON (2000), Miramax picked up U.S. rights to ZU WARRIORS, along with SHAOLIN SOCCER (2001) and HERO (2002). The latter two films were released theatrically in the U.S. in 2004. ZU WARRIORS was also planned for a theatrical release. Miramax re-edited and dubbed the film, then tested if for at least one audience. The reaction was so bad that theatrical distribution was abandoned, and the film made its U.S. debut on video in 2005.

Miramax’x 2005 DVD release presents a beautiful widescreen transfer of ZU WARRIRORS , with both the original language track and the dubbed English track, plus optional subtitles. The English dubbing shows signs of attempting to tailor the dialogue for an American audience, but the effect is hardly helpful. The disk contains the shortened version of the film, which was prepped for a planned (but abandoned) theatrical release; despite the re-editing, the running time still feels interminable.
The limited bonus features include a making-of featurette. Basically a promotional puff piece, this consists mostly of sound bites from the cast, describing their roles in the film. Producer-director Hark propounds the themes of the story, providing some insight into his heavy-handed handling of the material. Most interesting are the interview snippets with the effects technicians, discussing the formidable task of creating the mythical world of Zu on screen.