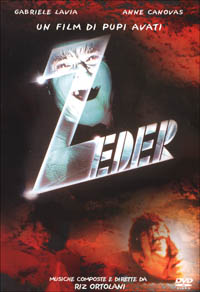 Last night, the American Cinematheque screened ZEDER (1983) as part of its 7th Annual Festival of Fantasy, Horror & Science Fiction Films. The film is not exactly a masterpiece, but it is weird and interesting enough to be worth a mention, for the benefit of horror fans who might not have heard of this obscure title. (The film is also known as VOICE FROM THE BEYOND.)
ZEDER was directed and co-written by Italian filmmaker Pupi Avati, who in some cult circles is as revered as highly as Mario Bava and Dario Argento, mostly on the basis of this film and on his 1976 effort, THE HOUSE OF LAUGHING WINDOWS. Judging from these two films, one would have to conclude that Avati’s stock in trade was creating a genuinely creepy atmosphere mixed with intriguing metaphysical concepts; he seemed unable to marry these strengths to a coherent narrative, but that did not stop the films from being intriguing and/or disturbing.
ZEDER dates from the early ’80s era when – inspired by George Romero’s DAWN OF THE DEAD, which was financed by Argento’s company  – Italy was churning out gory zombie films as fast as they could pry open the coffins on the restless dead. Typical examples include Lucio Fulci’s ZOMBIE 2 (the original DAWN OF THE DEAD was known as ZOMBIE in Italy), Umberto Lenzi’s NIGHTMARE CITY (a.k.a. CITY OF THE WALKING DEAD), and Andrea Bianchi’s NIGHTS OF TERROR (a.k.a. BURIAL GROUND, ZOMBIE 3).
Unlike the majority of these zombie flicks, ZEDER features little if any gore. It gets off to a great start with a prologue set in France decades before the main action, when an investigation into a “haunted house” goes wrong, leaving several people dead or wounded (but apparently not discouraged, since they show up later, still seeking after mysterious metaphysical truths). The action jumps ahead in time to show Stefano (Gabriele Lavia, previously seen in DEEP RED and INFERNO), a young novelist who discovers the words from a strange letter on the ribbon of a used typewriter his wife has bought him. This leads him on a quest to discover the mystery behind the letter, which refers to “K-Zones,” areas where time stands still and where the dead, if buried, will return to life.

The plot plays out like a conspiracy movie, with a mysterious group staying one step ahead of Stefano and thwarting his efforts (although why is not exactly clear). Avati’s great accomplishment here (as in his previous creepfest, HOUSE OF THE LAUGHING WINDOWS) is that he manages to maintain an ominous atmosphere of unsettling dread throughout, even when not much is happening. You seldom see zombies, except in occasional glimpses, and the whole thing feels like an ineffable mystery that remains just inches beyond the grasp of understanding – until it’s too late and the story spirals down into tragedy. (The ending pre-figures the film version of PET SEMATARY by six years.)
On the downside, Avati has little or no inclination for narrative credibility, and he will throw in any twist he wants to keep the story going. This results in the ludicrous implication that everyone of Stefano’s acquaintances is part of the conspiracy – even though the conspirators are based in France and Stefano lives in Barcelona. You end up scratching your head and wondering why all his friends don’t just offer him membership in their cult instead of going to all the trouble of chasing around after him.
Script problems aside, the movie is weird and unusual enough to hold interest. By omitting the gore and focusing instead on interesting concepts – like the K-Zones – Avati captures a wonderful sense of the uncanny. One particularly remarkable scene has the French scientists welding a body inside a coffin, drilling a hole to insert a camera lense, and burying the whole contraption in a K-Zone so that they can document the resurrection process without fear of the re-animated body escaping. The intersection of science and superstition has a wonderful kick – the premise actually starts to seem credible, and you can feel the hairs standing on the back of your neck. Typically, Avati confounds expectations, avoiding the sequence’s obvious pay-off: we do not see the corpse escape and wreck havoc, but a few chilling glimpses of the aftermath leave no doubt that, once again, the scientific inquiry into the afterlife has gone wrong.
ZEDER has been released on DVD; unfortunately, this barebone presentation of the film, without bonus features, is now out of print, although specialty video stores may still have a copy for rent, and used copies are available on Amazon.Com. In any case, though ZEDER may not be perfect, it is definitely worth checking out, especially if you’re tired of more conventional fare.
(NOTE: The title comes from a character named Paolo Zeder, a dead scientist who returns after being bured in a K-Zone.)