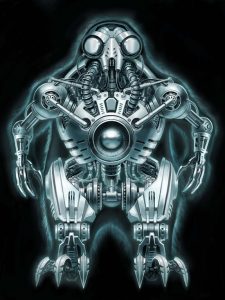 Bleeding Cool posted this illustration from designer Peter McKinstry that purports to be the internal structure of DOCTOR WHO’s old nemeses, the robotic Yeti’s.
The Yeti’s, tools of the other-dimensional Great Intelligence menaced second Doctor Patrick Troughton in the 1960’s serials The Abominable Snowmen and The Web of Fear.

The sometimes chilling, often kinda silly and cuddly-looking creatures are said to be featured in this year’s DOCTOR WHO Christmas special.
It’s not the first time Yetis were postulated to be un-earthly in origin. In the Cthulhu Mythos, the Yeti, (Mi-go or Mei-go) are said to be fungoid/crustacean extraterrestrials with strange motives, using furs at times to disguise their presence and true forms.
Nigel Kneale’s (THE QUATERMASS EXPERIMENT) Abominable Snowmen were mentally advanced (possible) extraterrestrials.