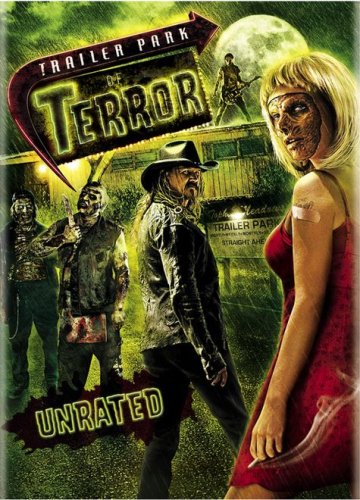 With a name like TRAILER PARK OF TERROR, I was certain Steven Goldmann’s 2008 horror was going to be a diabolical shambles. I figured I’d sit through it anyway, so I could warn you good people to use your precious time on other things, because, well, that’s the kind of selfless gal I am! The thing is, though, this isn’t the stinker I thought it’d be. It isn’t brilliant by any stretch of the imagination, but this over-the-top outlandish horror is surprisingly entertaining.
Based on the Imperium comic series [of which I have no knowledge], Trailer Park of Terror takes us to 1981 and introduces us to pretty girl Norma [Nichole Hiltz] who lives in a dirty, trashy, and downright disgusting trailer park. The inhabitants of the trailers are every repulsive stereotype you can possibly imagine: Thuggish Marv, who fancies his chances with Norma; Miss China Girl, the ‘masseuse’; Stank, a road-kill jerky maker; Roach, a drug addict and rockabilly guitarist; and Larlene, a morbidly obese woman with a passion for Stank’s meat. Desperate to get away from this hell-hole with its scumbag inhabitants and pink flamingo gardens, Norma sets off to leave with her new fella who she believes can give her a better life. Unfortunately Marv and his redneck buddies don’t take too kindly to him, and when their bullying gets out of control, Norma’s clean-cut boyfriend is accidently killed.
A distraught Norma storms down the road full of rage, where she encounters a mysterious stranger [country singer Trace Adkins]. Little does she know she’s striking a deal with the devil when she takes his gun and returns to the trailer park to have her revenge. She kills everyone, and then burns the park to the ground; she too perishes in the fire.
Jump forward to present day, and many people have gone missing in the area. A pastor and his bus full of wayward teenagers arrive during a terrible storm; the teenagers include the usual caricatures that we see so often in horror films: an addict, a slut, a gay guy, a goth, a klepto – all deeply troubled kids, but the pastor believes he can bring out the good in them. When their bus crashes, they are forced to seek refuge in the nearby trailer park, which is run by a very young and alive Norma. At night her old neighbours, now zombies, haunt their neighbourhood offing any visitors they find in strange an imaginative ways [ever fancied being skinned and then deep fried!?]. They’re still up to their old tricks, making jerky, making love, making music, and it is all done in an amusing and off-the-wall way.
Trailer Park of Terror didn’t make me laugh, but it did bring a smile to my face. Roach, the rockabilly guitarist, will either irritate you or delight you; I hope it’s the latter, because he’s given a big chunk of screen time and even his own full length song.
The acting of the teenagers is pretty one dimensional, but the screenplay doesn’t require fantastic performances from them, so it doesn’t matter too much. If you’re looking for a serious, stylish and classy horror, then avoid this film like the Black Death! Everything about Trailer Park of Terror should be taken with a pinch of salt. It doesn’t take itself seriously at all, and neither should we.
TRAILER PARK OF TERROR  (2008). Directed by Steve Goldmann. Screenplay by Timothy Dolan. Cast: Nichole Hiltz, Trace Adkins, Matthew Del Negro, Ed Corbin