A second viewing of the film helped me overcome my initial disappointment and somewhat revise my opinion. The story still the wanders back and forth a bit, but the heart-felt emotion invested into the plight of the lead characters — Victor, Victoria, and especially Emily the Corpse Bride — helps offset the structural weaknesses.

In an early scene, Victor sits down at a piano in his fiance’s home and begins to play while the camera performs a graceful, sweeping arc around him (worthy of any live-action Hollywood musical). When we finally get a closeup look at his hands on the keyboard, we see that the brand name on the piano is not Steinway but “Harryhausen.” Ray Harryhausen, of course, is the maestro behind the stop-motion effects for such classic fantasy films as THE GOLDEN VOYAGE OF SINBAD and JASON AND THE ARGONAUTS. 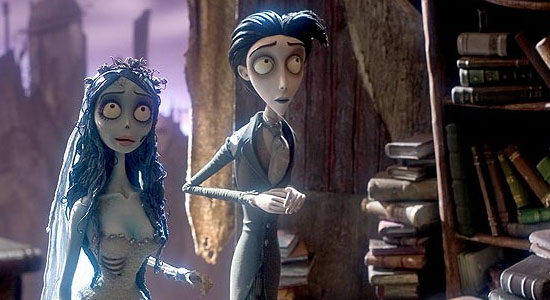