By the diminishing standards of American remakes of Asian ghost stories – a phenomenon that descended to the dismal depths of  the infernal gulf with last year’s not so terrifying trio of ONE MISSED CALL, THE EYE, and SHUTTER – THE UNINVITED must be reckoned a kind of success, though not an exalted one. This redo of the South Korean art house hit A TALE OF TWO SISTERS takes the basic story of its ambitious source and nimbly dumbs it down into a  multiplex thriller targeted an undiscriminating teens looking for nothing more than a few good scares. As far as haunted house movies go, it is no match for the original, nor for the 1944 black-and-white classic from which it lifts its title without explanation (exactly who is “uninvited” anyway?). But it stands on its own as a decent popcorn movie, proving that the old worn-out chills of the J-horror genre can still elicit a few screams of fear from an appreciative audience.
Clocking in at 87 minutes, THE UNINVITED is too short to be boring. This is quite a contrast to TALE OF TWO SISTERS, which deliberately avoided the pace of a thriller, opting for a leisurely editing style that attempted to lull viewers into a hypnotic trance (if not put them to sleep). The original’s cryptic narrative – essentially a domestic drama dressed up in ghost story clothing – has been ironed out into a straight-forward mystery-thriller. What was ambiguous or even vague has been clarified – wrapped up into a neat bow that answers the obvious questions instead of forcing the audience to come to its own conclusions.
This may sound like turning a silk purse into a sow’s ear, but you have to give THE UNINVITED credit. Previous Asian remakes like SHUTTER sometimes tied themselves into knots trying to make sense of the supernatural – which tends to operate on an irrational level in Asian films, the lack of logic acting as an extra assault about the sensibilities, creating films that not only shocked but also disturbed, for after all what is more frightening than a world that makes no sense? THE UNINVITED, somehow, avoids this tripwire, fashioning a new pattern that is less complex than TALE OF TWO SISTER but without too many obvious gaps.
Of course, this simplicity comes at a price. The lack of ambiguity makes the film  easier to understand but also renders it at an almost comic book level. Instead of carefully calculating the performance of Elizabeth Banks as the new step-mom whom Anna (Emily Browning) suspects of murder, the film serves up a wicked step-mother whose menacing glances border on camp. Instead of exploiting the ambiguity that has haunted ghost stories at least since Henry James’ Turn of the Screw (filmed as THE INNOCENTS in 1960), THE UNINVITED doesn’t ask us to decide whether the ghosts are real or only the remnants of Anna’s stay in a mental hospital: it tries to deliberately fool the audience (with the occasional cheat) before hitting them with a big surprise at the end.
Unfortunately, this SIXTH SENSE-type revelation is visible a mile away now that the obscuring twists in the narrative have been straightened out. But just in case you didn’t see it coming, THE UNINVITED supplies a final montage, a la SIXTH SENSE, that reprises several scenes, in slightly altered form, to clarify what really happened. (One of these raises more questions than it answered, showing us only the pay-off, not the set-up, and leaving us to ponder how a victim got into such a precarious predicament.)
On the plus side, the scare-to-exposition ratio has been upped in honor of attention-deficit viewers, and the spectral apparitions have been enhanced with a reasonably restrained use of prosthetics, computer-generated imagery, and a spattering of blood (though not nearly enough to please the gore-hounds). Browning is good as Anna, but Arielle Kebbel doesn’t have the spark of rebellion that we are supposed to see in Anna’s older sister. The ever reliable David Strathairn lends credible support as their widowed father, but you suspect he signed on hoping for something closer to TALE OF TWO SISTERS, with a bit more dramatic red meat instead of red blood.
Ultimately, THE UNINVITED is satisfying on a superficial level: it delivers its scares wrapped up in a simple story that makes sense as long as you don’t pick apart the details. But its simple approach dooms it to skimming the surface of horror; there are no disturbing depths, no unresolved ripples that continue to lap swirl inside your mind and lap against after you leave the theatre – no cold and clammy phantom fingers tracing up your spine. In a way, the film’s suprise ending works too well, exorcising the supernatural and locking up the evil in a way that – though not a typical happy ending – turns on the lights and leaves nothing left to fear. 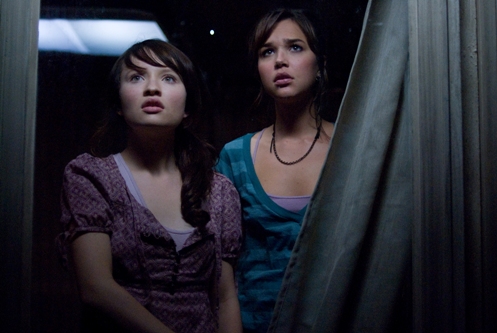 SPOILER: Warning – Reading this will ruin the surprise

The film features at least one notable cheat in order to keep its big revelation a surprise. If you pay close attention, you will realize before long that Anna’s older sister is not really there: only Anna speaks to her; and although Alex lurks in scenes with the rest of the cast, and even talks at them, they never respond to her. The cheat occurs when David Strathairn exits a scene and noticably shrugs his shoulder to avoid bumping into Kebbel as he brushes past. If Alex is only a figment of Anna’s imagination, Strathairn’s character should have moved through the empty space without having to avoid a collision.
THE UNINVITED (2009). Directed by Charles Guard & Thomas Guard. Screenplay by Craig Rosenberg and Doug Miro & Carlo Bernard, based on the motion picture A TALE OF TWO SISTERS (Changhwa Hongryon) written and directed by Ji-woon Kim. Cast: Emily Browning, Arielle Kebbel, David Strathairn, Elizabeth Banks, Maya Massar, Kevin McNulty, Jesse Moss, Dean Paul Gibson.