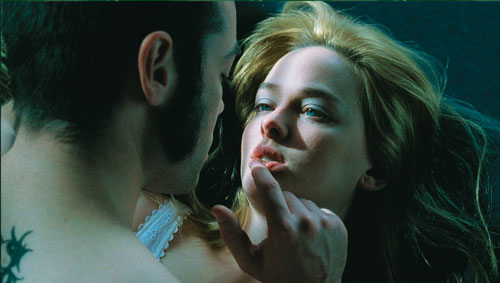 TEETH is a deceptive movie on first encounter. The DVD box is fairly tame, showing star Jess Weixler in a bubble bath, only her head showing, her eyes gazing at the camera with subtle menace, or arrogance. “Go ahead, screw with me,” they seem to warn. Turn the DVD box over and you realize the movie is about a teenager whose vagina possesses teeth, sharp ones, capable of inflicting grievous harm upon a sexual partner who dares offend her. A clear opportunity for a sleazy exploitation horror film, but here’s another deception. The film is actually a quite sensitive, compelling, and entertaining story of sexual awakening, male-female posturing, and the ownership of one’s body – the ideas made palatable, believable, and convincing through the careful handling of first-time writer-director Mitchell Lichtenstein and the believable performance of Weixler, who won the Special Jury Prize for Dramatic Performance at Sundance when the film debuted there. With a review consensus that the film was “smart, original, and horrifically funny,” according to Rotten Tomatoes, TEETH is a refreshingly invigorating film about character development – revulsion, acceptance, and finally embrace of one’s difference – all couched in a quasi-horror tradition. I found the film quite intriguing even if I couldn’t unclench my legs for 90 minutes.

Miller grew up loving movies and appreciating great stories, but as a youth always felt he’d grow up writing music for the concert hall. “One of my mentors was American composer Aaron Copland, who felt that my sound was naturally visual, and that I’d make a good film composer because I love the way stories can inspire people,” Miller said. “I took in the advice, but didn’t immediately drop everything for movies, although the desire to eventually embrace film composing was burning brightly in me. A few decades later – here I am!”

He made the move into film music sporadically during the late 1980s and 1990s, scoring a handful of films but concentrating on writing music for TV commercials – more than 1400 of them to date (he’s also been the recipient of five CLIO awards for music). During the late 1990s he also served as composer-In-Residence with the New York-based Jupiter Symphony. The scoring of very filmic commercials led to interest from directors of short films, documentaries, and independent features. “I have been asked quite often about the similarities between scoring spots and films, and my answer is always the same – other than the fact that music is being written for a moving image, I think they are quite different disciplines. In a commercial, you are quickly creating an attractive sense impression of something – often with a story arc that resembles a well written paragraph. The musical phrases are designed to complete themselves very quickly – a movie is like an opera; the internal artistic logic has natural space and time to develop. Good scores are beautifully crafted theme-and-variation styled works in their own right.”

Miller’s early experiences in film composition, indie films like CONCRETE ANGEL (a 1987 drama about a young man who forms a rock group with his friends in order to win a music competition tied into The Beatles’ 1964 visit to Toronto) and PANTS ON FIRE (a complicated romantic comedy from 1998, and a fistful of short films) taught Miller the value of collaboration. “I also began to work on how to understand music’s vital role in a film, and how easy it is to compound an emotion in a scene to the point that viewers turn off because it’s too heavy, or is stripped of its natural, honest affect.”

Miller had been scoring feature films pretty steadily since 2005 when Mitchell Lichtenstein’s quirky horror drama came his way two years after that.

“When I saw TEETH, I was of course a little distracted by the severed penises, which is of course the thing everybody talks about at first,” Miller said. “But I noticed instantly that Mitchell Lichtenstein is a unique film maker with a strong command of his story-telling. There are so many great intimate and warm moments in this movie that somehow blend in with the bizare aspects, that I wanted very badly to work with Mitchell. I felt like I needed a musical metaphor for the Freudian (and ancient) myth of Vagina Dentata, a healthy palette of expressive horror music, and tender thematic material that can nestle right in cracks! I had a blast creating this one. I could make fun and be the straight man all in one movie!”

Miller worked closely with both director Mitchell Lichtenstein and also Beth Rosenblatt who was music supervisor on the film. “My first mission was to write an overture apart from the movie – my idea – that could contain all of the elements that I needed – when I played it for Mitchell I remember getting a hug immediately! I then knew I hit the target for our film!”

The sonic palette for TEETH is characterized by the prominence of frame drums (played by virtuoso Glen Velez), bass pan flutes, and assorted primitive wood flutes, bass clarinet trio, piano (for the tender music), and traditional orchestra. “I needed to have fun with primitive folk lore, be able to be genuinely tender, and powerfully symphonic during a few very horrific moments,” Miller said. “I believe the elements worked well together in their own weird way!”

While seeming to be a horror thriller on one level, TEETH is more of a fascinating character study of Dawn. Aware of this, Miller was able to enhance the film’s more humanizing aspects while at the same time supporting the spookier and more disturbing moments. “The intimate piano waltz melody was the key to Dawn’s character in the film,” said Miller. “A notable scene is very late in the movie, when she moves away from home and everything strange that has occurred. Her travel is accompanied by that theme in a pure form – Mitchell kept sight of Dawn’s young and fairly idealistic spirit throughout the story (although she certainly discovered her “power”) and I tried to illuminate that spirit in music.”

Miller is just now finishing scoring Lichtenstein’s next film, HAPPY TEARS. A far different film from TEETH, this one is about two sisters (Demi Moore and Parker Posey) who return home to deal with their ailing father (Rip Torn), only to face some surprising situations. Miller is investing this film with a similar kind of unique style and color-collision that he feels “will be as unique to this film as TEETH’s score was for our first collaboration.”

With some twenty scores under his belt, most in the last three years, and the prospect of HAPPY TEARS being critical success, Miller’s career may well be on its way to the A-list. “I like the idea of making movies that make an imprint of people’s soul in some small way, even if it’s through laughter,” Miller said. “That’s the only reason to create after all, and I want to spend several decades working hard helping lots of great stories come to life on film.”