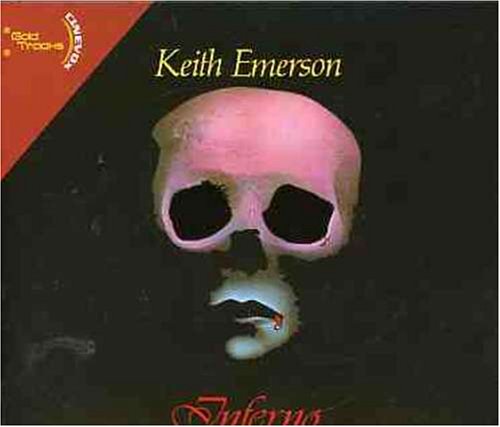 Although often compared unfavorably to Goblin’s music for SUSPIRIA, keyboardist Keith Emerson’s score for the sequel, INFERNO, is every bit as in tune with the film, perfectly matching the mood and action. Unlike Goblin’s heavy rhythms, shrieking vocals, and shrill synthesizers of the previous film, Emerson employs a much more subtle approach, weaving a score out of quiet piano motifs supported by orchestral arrangements, only occasionally reaching into his electronic bag of tricks for a more outre effect. The result comes closer to a conventional piece of film scoring, underlining the on-screen action without drawing as much attention to itself.
If there is a failing to the music, it is one seen in several Argento films (though not in SUSPIRIA): a disconnect between the music and the visual. Occasionally, Emerson’s music seems to shrill for the scene it accompanies. In the case of Kazanian’s Tarantella” (in which a man is attacked by rats in Central Park during a lunar eclipse), the music builds to a grandiose climax more appropriate for a heroic rescue than a bloody demise. Fortunately, this (relatively minor) problem does not extend to the soundtrack album, where the music can be enjoyed on its own.
Unlike the album for SUSPIRIA (and indeed for other Goblin soundtracks, which gave the impression that the group had simply performed a series of track that Argento then cut into the film wherever he felt like it), the track listing of the INFERNO album follows the film in chronological order. Most of the music consists of delicate piano instrumentals (enhanced by ominous orchestral arrangements), which thread the recurring “Inferno” main title theme throughout the film; the effect is hypnotic and dreamy rather than overtly horrific. For the major suspense set pieces (e.g., “A Cat Attic Attack”), the orchestra kicks in with all the enthusiasm of Bernard Herrmann as his most intense, and Emerson adopts a more frenetic, perscussive style of playing that will be familiar to fans of his work as a progressive rocker.
Providing a break from the piano-orchestral sound that dominates the music are a handful of other tracks. “Rose Gets It” features an eerie wordless vocal (probably achieved with a synthesizer; the effect sounds much like a theremin). “The Library” is a brief piece for solo church organ that manages to evoke a Gothic ambiance without sounding too cliched.  “Taxi Ride (Rome)” and “Cigarettes, Ices, Etc” recreate the old three-piece line-up of Emerson, Lake, and Palmer, with bass and drums laying down the rhythm while Emerson layers various, piano and keyboard sounds on top. “Cigarettes,” the last track on the original album, was apparently intended as the closing title music; instead, Argento reused the track “Mater Tenebrarum,” a sort of rock-and-roll version of Jerry Goldsmith’s OMEN theme, with a vocalist chanting the Latin names of the “Three Mothers” described in a book by an alchemist: Mater Suspiriorum (the Mother of Sighs), Mater Tenebrarum (the Mother of Darkness), and Mater Lachrymarum (the Mother of Tears). A handful of music cues from the movie did not make it onto the old vinyl soundtrack album. These were mostly brief, droning synthesizer bits, used as transitions. Subsequent CD releases include a suite of outtakes.
Although lacking the outrageous impact of Goblin’s work for SUSPIRIA, the music for INFERNO is excellent in its own right. In fact, Emerson’s debut as a film composer far exceeds his subsequent, much less distinguished work on NIGHT HAWKS and MURDER ROCK (although he did contribute some nice work to GODZILLA: FINAL WARS). Those seeking the progressive rock assault of keyboardist’s group efforts (The Nice, ELP) will be disappointed, but taken in its own terms, the music for INFERNO is as good as anything Emerson ever did.