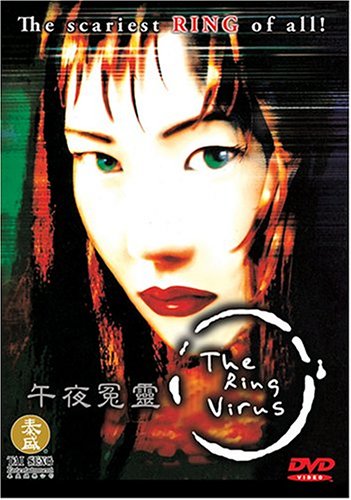 Derived from the Japanese film RING (a.k.a. RINGU, 1998) and the novel that inspired it, this 2000 film from South Korea is more or less an equivalent of America’s THE RING (2002): that is to say, it is a remake that does little artistically to justify its existence; mostly, it simply rehashes the original with a new cast speaking the language of its target audience. THE RING VIRUS has some good moments, along with some of the novel’s plot points that were omitted from the previous film, which are enough to make it interesting for fans of the franchise (or for cinefiles interested in seeing how the same story is filtered through the lens of a different set of filmmakers), but overall it is a negligible achievement.
As in RING, the lead character is a female reporter Sun-Joo (Eun-Kyung Shin) who investigates the mysterious death of her niece, uncovering a fatal videotape that kills all those who watch it, after seven days. In RING VIRUS, Sun-Joo is aided not be an ex-husband with psychic powers but by an obnoxious doctor/coroner who likes to make snide, sexist remarks.
There is a little bit more scientific-sounding dialogue (mention of viruses) that is perhaps supposed to seem more realistic, and the cinematography opts for colorful pastels, instead of foreboding shadows, downplaying the element of supernatural horror that always seemed prevalent in RING (even when nothing overtly scary was happening).
The result is a film that looks good but which often lacks tension. To be fair, writer-director Dong-bin Kim does pull off some nice scenes, including a quiet exterior (sort of the calm before the storm) filled with beautiful swirling snow (which is probably the work of a CGI team).


THE RING VIRUS does include some elements from the source material (a novel by Koji Suzuki) that were not in 1998’s RING: the male lead is not the ex-husband of the lady reporter but a somewhat unlikable creep; the evil ghost (Sadako in the original, here called Eun-Su) is somewhat older; she worked for a time with a small entertainment group, and was murdered after a would-be rapist discovered that, despite her female appearance, “she” actually has masculine characteristics. Despite this, the Korean film clearly is a remake of RING, again featuring a single-mother female reporter (instead of the married man of the book) and using the famous ghost-out-of-the-television tube shocker at the climax. (In the book, the “cursed” characters die from heart attacks brought on by tumors, apparently created by a literal virus with a seven-day gestation period.)
Curiously, THE RING VIRUS includes a few moments not in the original RING which nevertheless found their way into the American remake: In flashback, we see Eun-Su’s mother leaping off a cliff. Later, our heroes find photographic images that were created directly on film by Eun-Su’s psychic powers, foreshadowing her ability to imprint images on the lethal videotape. And, perhaps in an attempt to portray Eun-Su as a more human character (rather than a just a threatening ghost), the director shows us her face several times during flashbacks. (This undermines the famous climax: like director Hideo Nakata in RING, Dong-bin Kim films the actress with her face hidden by long black hair when the ghost climbs out of the television set; unfortunately, since we already know what her face looks like, hiding her features seems like a pointless vestige of the original).
Despite its flaws, THE RING VIRUS does have odd unexpected elements that make it a mildly interesting variation on the familiar story; unlike the Americanized THE RING, there are one or two interesting surprises, plus a visual style that at least tries to establish itself on its own terms (even if it is not fully successful in this regard). As such, the film is of interest to fans of Asian horror films. Most casual horror fans will probably find themselves better off if they stick with the original Japanese version of RING.

In the U.S., THE RING VIRUS is available on DVD in two different versions.