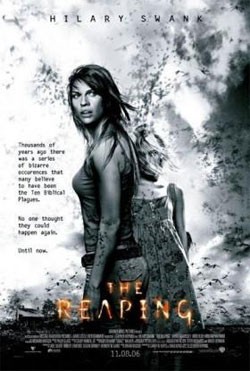 Although terrible, this film does raise a handful of interesting questions:

There are no answers, but puzzling over these behind-the-scenes mysteries will engage your intellect far more than anything shown on screen. THE REAPING is a dull and plodding supernatural thriller that charts an all-too-familiar course (a former believer, now a skeptic, regains her faith) and does it with all the sincerity of a cynical snake oil salesman who’s convinced the rubes in the audience will be more receptive to his pitch if he garnishes it with a little religious revivalism.
The film begins with a tedious two-part introduction: Father Costigan (Stephen Rea) sees photographs smolder and burn, alerting him to some impending confrontation with evil; skeptical inquirer Katherine Winter (Hilary Swank) debunks a miracle in a church that is actually tainted with toxic waste (causing hallucinations interpreted as visions). Then Swank gets a call from Rea, who winds up literally phoning in his performance, as he never shares a scene with her on-screen, nor in anyway interacts with the main action. His role seems literally dropped into the film like an editorial afterthought, the “Johnny Explainer” character needed to illuminate the religious significance of what is happening (even though Swank’s character is supposed to be a former missionary, and she is clearly not old enough to have forgotten her training, even if she has lost her faith). The phone call doesn’t really introduce the plot; that arrives later, in the form of Doug (David Morrissey), a small-town science teacher whose local river has turned red, just like the first plague brought down by Moses upon the Egyptians.


When Winter heads down south to investigate the phenomenon in the isolated hamlet, the film threatens to pick up some steam, and the eerie sight of a river red as blood is a memorable image. But it soon emerges that the script has little idea what to do with Swank’s character. There is no real plot here, just a premise: depict the ten plagues of Exodus. As the film begins ticking them off one by one, there is little for the protagonist to do except stand around scratching her head and trying to come up with a logical explanation – which we all know will never emerge.

Eventually, the film gets around to pointing a finger at lovely little scruffy muffin Loren McConnell, an alleged bad seed played by AnnaSophia Robb, whose best efforts at a menacing glare result in a vaguely pissed-off expression more suitable to a teen who didn’t get to borrow the car keys for date night. You know the drill: she’s evil, but Winters won’t admit it until the final scene, when (just like Gregory Peck with little Damien) she finally takes knife in hand to do the Lord’s work.

To its credit, the film offers up a conspiratorial twist, but it’s a rather ditzy one that requires a mouthful of exposition to justify. Not to worry, though, the folks in the special effects department wake up long enough to depict the Wrath of God in the form of some fireballs that wipe out the evildoers just like supernatural SCUD missiles. (It just doesn’t pay to be a Satanist in a major movie these days!) As if that were not enough, there’s another twist in the very last moment that sets the film up to be a prequel to ROSEMARY’S BABY, but by that point you are probably already reaching for your coat and wondering why you even bothered sitting through this fractured flicker show. 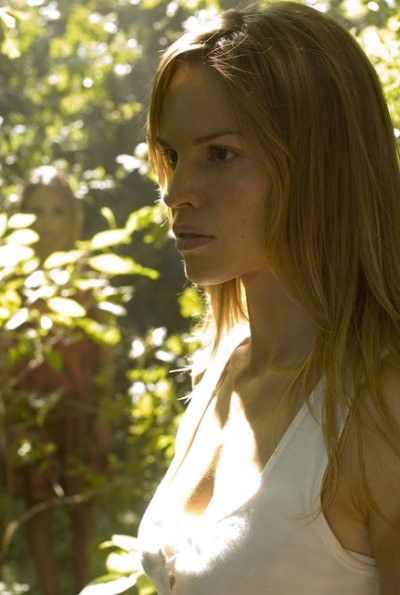 Swank is competent, but she seems out of her place in a genre thriller; she’s trying to play a real character in a film that needs overblown melodrama (if not outright camp) in order to milk some dramatic blood out of a very dry turnip. She gets solid support from Idris Elba, who really deserves something better than his role as Winter’s assistant Ben (in the time-honored tradition of ethnic sidekicks, he gets…well, we won’t give it away, but you can guess). In a rather odd piece of cinematic shorthand, because Ben is black, the film doesn’t tell us he’s gay in order to short circuit any romance between him and Winter; it is simply assumed that the two cannot possibly be involved.
Hopkins shoots the proceedings in a herky-jerky style that characterizes someone afraid that his material might be – well – boring, if not hyped up with some camera pyrotechnics. The music score is not quite so overblown, and the photography is not bad, but even with some decent sets to depict a decaying Southern mansion, the film cannot generate a simple thrill with the traditional scene of the damsel wandering the dark corridors at night, only to be startled by windows blasted open by a gust of wind.
In fact, the film has only one good jump-and-grab scare, when little Loren leaps unexpectedly out of the darkness to attack her mother. Other than that, thrills are in short supply. Even the big highlight, when Loren summons a swarm of locusts to fend of the lynch mob come for her, is at most slightly yucky, never bone-chilling.
For all its half-hearted pandering to religious viewers, THE REAPING never manages to even fake sincerity. The ultimate revelation of what is happening is based on a half-baked, allegedly Biblical legend that sounds precisely like a lame Hollywood writer’s device. It’s as if the filmmakers expected their audience to take everything on faith. Those looking for credibility – or even a little conviction – need not apply.

The film’s fiery conclusion, in which the cultists go up in flames when blasted by the power of God, is similar – but vastly inferior to – the conclusion of HORROR HOTEL (1960). 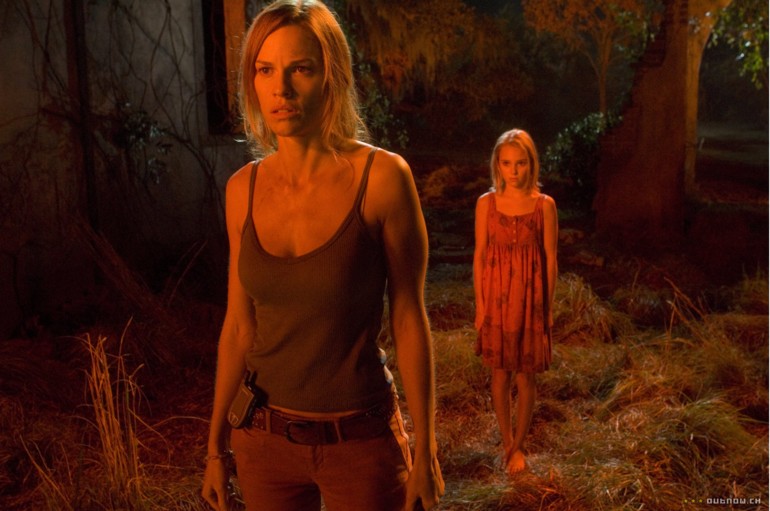