The Other Side is the El Mariachi of horror – Film Review 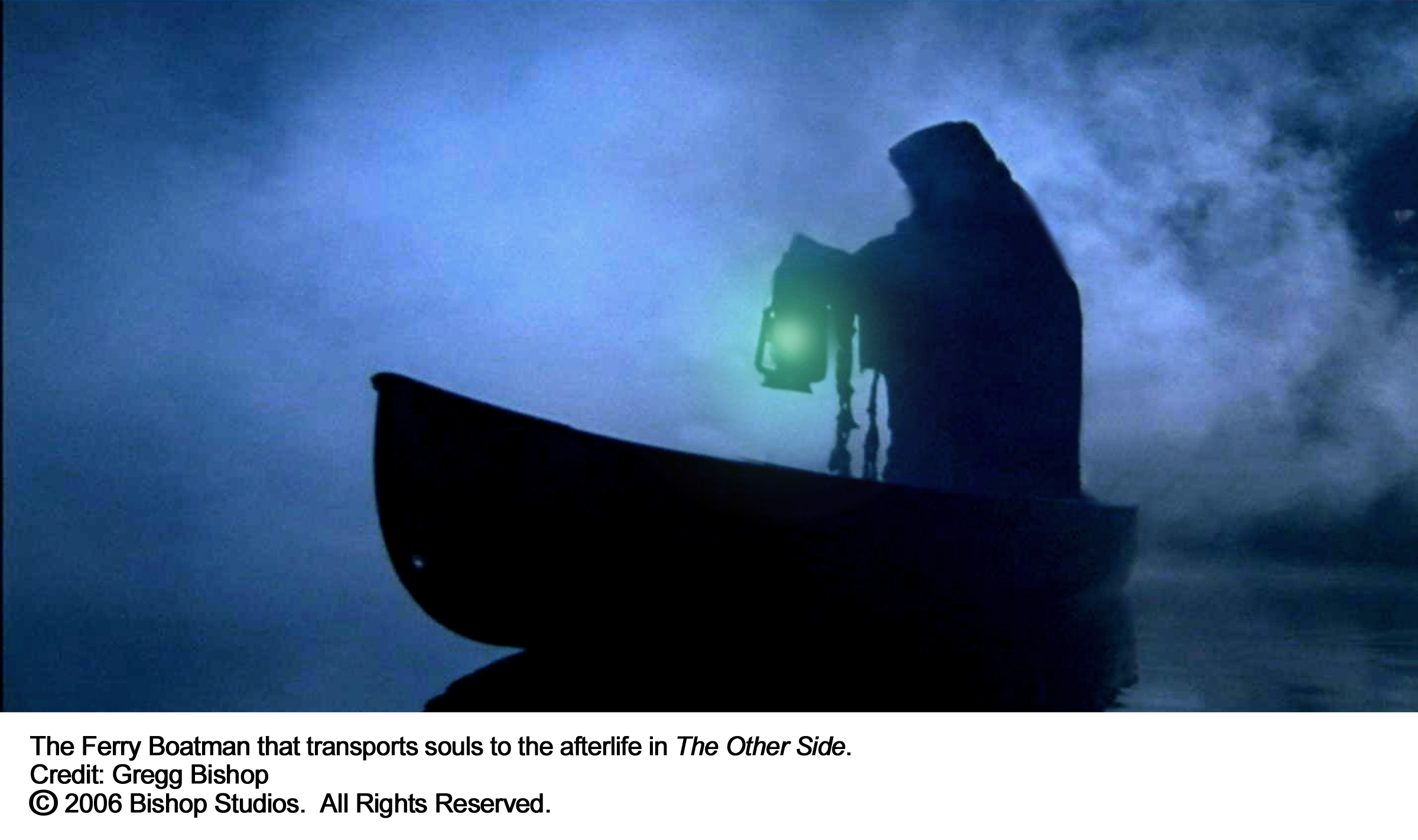 This action-packed horror-thriller combines elements from THE TERMINATOR, THE HIDDEN, and even SUPERMAN II, placing them in a supernatural context and wrapping them up in an intricate plot that weaves together a murder-mystery with a touching love story. Writer-director Gregg Bishop’s action-packed opus – about souls that escape from hell and are tracked down by almost unkillable “Reapers” intent on bringing them back – may be the EL MARIACHI of horror films: a low-budget calling card intended to open doors to Hollywood, allowing for a big-budget sequel-remake down the road.

With its seemingly non-stop action and supernatural thrills, THE OTHER SIDE certainly delivers the goods that will please audiences looking for a rip-roaring good time, but more impressively, the film also tells a complex story without ever dragging the pace to a standstill. The movie begins with Samuel North (Nathan Mobley) returning on a break from college to reuinite with his girlfriend back home. The reunion never takes place, because Sam is murdered, his soul landing in Nether World just long enough to be dragged along on the after-life version of a prison break: he returns from the dead along with a batch of other souls escaping from Hell. With the help of his new comrades, Sam sets out to unravel the mystery of his death, but there’s a big complication: Reapers – a trio of undead hunters whose job is to recapture the souls that belong in Hell.


There is another mystery lurking on the edges of the narrative: Why did Sam, who seems like a nice guy, wind up in Hell when he died? And if Sam truly belongs among the damned, how can the film resolve the love story between him and his girlfriend? Amazingly, instead of glossing over these nagging questions in favor of emphasizing only the action, Bishop’s script addresses them all in turn, tying them together into a tight conclusion that wraps everything up satisfactorily, while still leaving plenty of room for a sequel. In fact, the screenplay is practically a model of efficient story construction; it almost seems designed to prove that gunplay, firepower, and special effects need not be synonymous with brain-dead psuedo-entertainment.
Of course, many a good script and floundered on the shoals of a low budget; fortunately, that is not the case here. The stunning action, stunts, and make-up effects totally belie the financial restrictions of this independently produced film (which was shot in Georgia). But even more impressive is the way the flashy camera work serves the story, deftly juggling the many plot elements without ever dropping the ball.
Bishop pulls off several nice visual touches, not all of them featuring action set pieces. In a nice, sly shot, one of the dangerous Reapers lurks in front of a Neighborhood Watch sign, his upturned collar and furtive movements perfectly matching the iconographic image of the burglar on the sign.
Even better is virtuoso sequence portraying the death and resurrection of one of the Reapers (who take possession of dead bodies in order to do their work on the Earthly plane). When one of the Reapers is run over by a car full of Hell’s escapees, the Reaper’s signature hat falls off his head and rolls away. The camera floats from the body, indicating the soul searching for a new vessel – and alighting upon a passing ambulance, whose doors rip open as the corpse inside burst back to life. Encased in its new body, the Reaper walks by the parking lot where its previous host body died – just in time to grab its hat, which comes rolling down the stairs. The perfection of the timing is laugh-out-loud funny and totally brilliant.
Even without star power, the film features great performances all around, although lead Nathan Mobley is perhaps overshadowed by his supporting players (perhaps because his character is stuck in a situation that he cannot control and is therefore mostly along for the ride). If the film misses perfection anywhere, it is in the resolution of the love story, which relies a bit too heavily on a clichÃ©d happily-ever-after limbo that looks like something out of a perfume commercial. Also, the film never really wrestles addresses the moral question regarding the Reapers: because they are pursuing our protagonist, they come across as the villains; but technically, their job is to retrieve evil souls escaped from Hell, which seems moral and just. Hopefully, the moral implications will be addressed in a sequel. 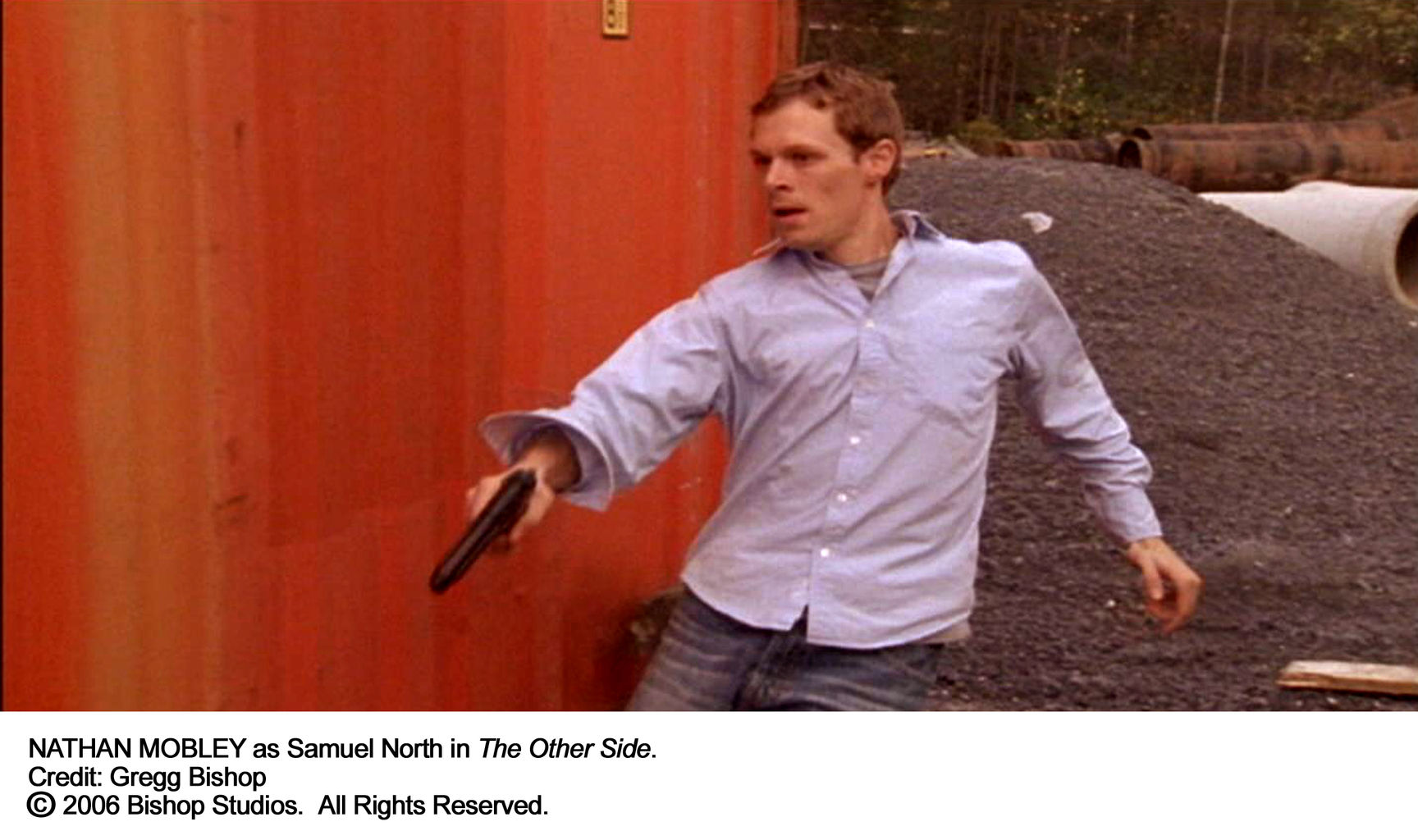 The film earned a nod for Best Feature film at the 2006 Shriekfest film festival in Hollywood.
The inspiration model for THE OTHER SIDE was Roberto Rodriguez’s EL MARIACHI, a low-budget independent film that launched two slick, big-budget sequels. One of the running gags during the Question-and-Answer session after the screening at Shriekfest was which stars would replace the excellent cast of the original, with names like Ewan MacGregor and Michael Clarke Duncan thrown around.
THE OTHER SIDE (2006). Written and directed by Gregg Bishop. Cast: