THE LOST SKELETON OF CADAVRA is a fun idea, which would have been great as a short comedy film. Padded out to feature length at 90 minutes, it drags in spots. Oddly enough, this is not a running out of gas by the end  situation, but a problem in pacing closer to the beginning of the film.
I almost stopped watching about a third of the way through, when writer/director Larry Blamire (Dr. Paul Armstrong) and his co-star Fay Masterson (Betty Armstrong) began to repeat the same in-character ‘jokes’ for what seemed at least the fourth time.  I understand that the repetition is the gag, but these things work best with the old ‘Rule of Three’, in my opinion.
Fortunately, the arrival of the aliens Kro-Bar and Lattiss (Andrew Parks & Susan McConnell) livened things up considerably. The extraterrestrials’ odd take on blending in with the natives is by turns intriguing (such as not understanding how to use stairs) and laugh-out-loud funny. The creation of Animala (Jennifer Blaire, Blamire’s real-life wife) is inspired, both as how a 1950-60’s actress might approach an ‘animal-woman’ role, and by the appealing character’s even looser grip on how a stere 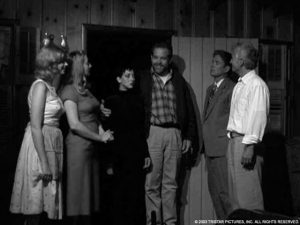 o-typical housewife of that era should behave. It’s mordantly clever.
“What to you think, honey?” asks the hapless mad scientist Dr. Roger Fleming (Brian Howe). “Always agree” she recites back cheerfully.
The film is in black and white (though shot on color video), and care is taken to use vintage sci-fi and horror music tracks from Valentino’s ‘Evergreen Collection’ (which graced such TV shows as the 1953 FLASH GORDON series, and films  that include THE BLOB and 1962’s THE BRAIN THAT WOULDN’T DIE).  Bronson Canyon and ‘Caves’, that favorite of films from the silent era onwards, is used as a location.
Working against the period flavor is the very evident fact that none of the male cast members  really bothered to cut their hair into clean-cut `60’s styles (in fact, it’s more of an `70-`80’s ‘dry look’).  The photography, while well done, never really seems to attempt to suggest 1960’s low budget feature styles, except for a number of longer held take shots. Instead, it often looks very much like a contemporary low-budget indie comedy, full of extreme close-ups and reaction shots that cut off the tops of people’s heads.
The film was transfered to film for its theatrical release, which requires as clean and crisp an image as possible. On a television, LOST SKELETON looks a little too clean and a bit ‘soft’,  revealing its video origins. Perhaps film-looking and heightened contrast would improve the old-movie illusion.
Special effects and props do a better job of suggesting the period, although computer video techniques are easily detectable. (Though not objectionable.)

The film might have been a true classic if it had tried a little less to come up with purposefully repetitious or “bad” dialog with a Ed Wood edge, and instead let the comedy grow more naturally from the screwball plot and characters, such as the irascible and bomastic Lost Skeleton itself. It’s a lab skeleton awkardly used as a puppet, and its scenes are consistently among the most amusing. (The Skeleton is voiced by director Blamire.)
LOST SKELETON OF CADADRVA is at its best when it really embraces the lurid silliness of the ideas and the fish-out-of-water reactions of the alien couple and monsters.
Note: This is a review of a cable TV broadcast and not a DVD viewing.
THE LOST SKELETON OF CADADVRA (2001) 90 min. Released by Tristar.
Cast: Larry Blamire (Dr. Paul Armstrong ), Fay Masterson (Betty Armstrong), Andrew Parks (Kro-Bar), Susan McConnell (Lattis), Brian Howe (Dr. Roger Fleming) Jennifer Blaire (Animala), Dan Conroy (Ranger Brad) Robert Deveau (The Farmer),  Darren Reed (The Mutant)
Written & Directed by Larry Blamire, Executive ProducerLars Perkins, Producer F. Miguel Valenti , Cinematography by Kevin Jones, Film Editing by Bill Bryn Russell
Production Companies: Fragmighty, Transom Films, and Valenti Entertainment.