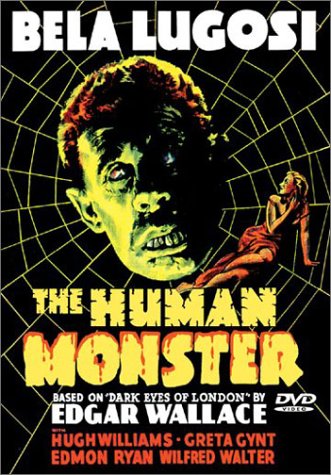 Based on a novel by Edgar Wallace (titled DARK EYES OF LONDON, as was the film itself in its native England), this is actually more of a crime drama than a horror film. Lugosi stars as “Dr. Orloff,” who runs a lucrative scam, insuring people and then bumping them off to collect the money. A young C.I.D. detective (Hugh Williams) is assigned to figure out why dead bodies keep turning up in the Thames; he is assisted by a Chicago police officer, who gets roped into the case for little reason other than that he happens to be on hand (having just delivered a fugitive to Scotland Yard. The trail leads to a home for the blind, presided over by a Mr. Dearborn, one of many beneficiaries of the publicly generous and respectable Dr. Orloff. Things get complicated when Orloff’s latest victim turns out to have a daughter; the police get her to cooperate, going undercover to expose the doctor’s scam. But (in a plot development reminiscent of Robert Louis Stevenson’s DR. JEKYLL AND MR HYDE), the doctor mysteriously disappears, despite a nation-wide manhunt. Where could he be hiding?
As the synopsis reveals, the plot of THE HUMAN MONSTER has no monster, nor much of what one associates with the horror genre. Lugosi’s doctor is given a few lines implying that he is a “mad doctor” (not merely a criminal one), and in one excruciatingly cruel scene, he uses some electrical gizmo to destroy the hearing of a blind-mute violinist — in order to prevent him from overhearing anything he could write about to the police. The blind residents at Dearborn’s home shuffle about like zombies, staring into space. The most prominent of these, Orloff’s hulking homicidal assistant named Jake, wears a bulked up Frankenstein-type costume and has pointed bat-like ears (along with blind eyes) to make him look monstrous as he carries out Orloff’s fiendish schemes (which, it eventually turns out, include drowning people in a vat and then dumping them into the Thames, located conveniently close to Dearborn’s building).
Still, the foggy atmosphere and moody photography lend a darkly horrific air to the proceedings, and Jake’s stalking of his victims (particularly the leading lady) still conveys an authentic chill. The plot is a bit creaky, but there is a certain charm to the film: it hits the obvious notes but hits them well. For example, the brash American cop is not as bright as his English counterpart, but he is good to have around when it comes time to break down doors and start shooting.
Typically, Lugosi does a fine job as a two-faced villain, seemingly innocent to the world at large while indulging in some first-class mugging when showing his sinister side. Sometimes, he goes over the top (e.g., he overreacts way too much when learning that his next intended victim has a next of kin who presumably could lay claim to the insurance policy), but overall he does an excellent job.
Though far from a masterpiece, THE HUMAN MONSTER is worthwhile viewing for anyone interested in old-time mystery-thrillers. For Lugosi fans, it is a chance to see the talented actor given a starring role that stretches his talent, in a film that (while far from lavish) boasts a stronger script and better production values than most of the films he would appear in for the rest of his (mostly disappointing) career.

Alpha Video’s discount DVD release is a bare-bones presentation, made from a print that is not in the best of shape. The image is reasonably good, but the sound is weak, making it hard to understand the dialogue unless you turn the volume way up. There are no bonus features.