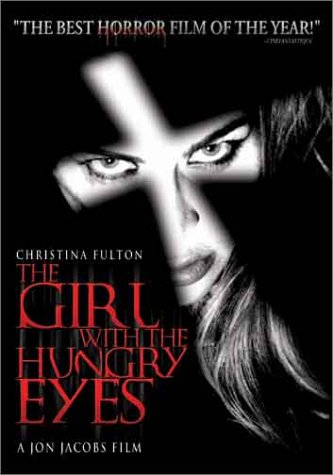 The difficulty facing low-budget filmmakers today is that the appeal of their movies used to stem from the willingness to go beyond the boundaries of what a major studio film would do in terms of visceral impact (whether horrific or sexual in nature). But when mainstream Hollywood is putting out films like INTERVIEW WITH THE VAMPIRE and BRAM STOKER’S DRACULA, it’s harder for the independents to push the envelope any farther.
But THE GIRL WITH THE HUNGRY EYES does just that. This is a film that dives into the deep end of the pool – and it’s not just a pool of blood. Despite a sometimes slack pace and occasionally vague exposition, it’s effectively sexy, horrific, and funny, because it isn’t afraid to throw all these elements together. Horror-comedies may be a dime a dozen, but this one works, perhaps because the humor derives from the jarring tonal shifts, which occur not only from scene to scene but also within scenes – sometimes within a single shot!
Director Jon Jacobs is abetted in this endeavor by Fulton, whose eyeball-rolling performance is the most enjoyable genre debut in some time. It’s hard to say whether she could manage a more conventional role – what is required here is not conventional acting. Wild mood swings – from teary-eyed pathos to arch sarcasm to outbursts of violence – never let the audience settle comfortably into the seats, thinking they know what will come next.
Jacobs employs a more basic approach to vampirism than either Francis Ford Coppola or Neil Jordan could get away with. He does not gloss over the horror – to be honest, he does not have sufficient production values for gloss, but the result is a kind of primal power lacking in the more polished efforts. The extended blood-love scene at the climax is an eye-opener for even jaded moviegoers. Its equation of blood drinking with lovemaking is taken to erotic lengths unseen in the higher profile films. (This sequence alone warrants some kind of notoriety for the theatrical version of the film; it will be missing from the video prints.)
The film has something to offer beside lurid sex, using exaggeration to satirical effect – as when playboy photographer Carlos insists he’s ready to commit himself to her. “Forever?” responds the Girl. “I don’t think so!” This care-free attitude allows Jacobs to get away with things that might have scared off other filmmakers. For instance, as if Fulton’s lips are not prominent enough, she often speaks through extremely noticeable fangs that exaggerate the contours of her mouth even more. The effect is at once humorous and thrilling, as she deliciously savors each new male victim who casts himself in her way. As the tag line says, “Real vampires play with their food.”
NOTE: After receiving brief midnight-movie distribution in uncut, unrated form, the film was released on home video in a shortened, R-rated version. The currently available DVD bills itself as the R-rated version.