This film raises an interesting question: How far is a viewer willing to follow a talented filmmaker down a rabbit hole, when it becomes clear that said filmmaker has lost his way? Writer-director Darren Aronofsky certainly proved he had talent with PI, and some of that talent is on display here. But it’s ultimately wasted on a muddled scenario whose story seems to have been deliberately obscured by narrative devices apparently intended to wrap the slim idea in some kind of profundity. In fact, Aronofsky seems dedicated to not clarifying the story to viewers – which would be acceptable if we were watching a cleverly constructed puzzle that only required sufficient thought to put the pieces into place. Instead, we’re watching a film that barely contains a story. It’s more of a concept – a conceit – an attempt, laudable but ultimately failed, to create a kind of visual poetry that transcend traditional narrative. It might have worked as a half-hour short, but at feature length the concept is stretched too thin.
Basically, the film consists of three separate threads. In the first, we see a conquistador (Hugh Jackman) seeking the Fountain of Youth for the benefit of his Queen (Rachel Weisz). In the second, we see Jackman again, this time as a doctor seeking a cure for the terminal disease afflicting his wife (Weisz again). In the final thread, a bald Jackman floats through the universe in what may be a time bubble (it sort of resembles a snow globe in space), while flashing back and forth between the previous threads.
How do these threads tie together? Aronofsky isn’t much interested in clarifying, nor does he even seem to care much about offering up tantalizing clues that might arouse your intellectual curiosity. In fact, the trailer for the movie probably does a better job of laying out the basic premise, at least giving you enough of an idea to make it sound intriguing. Did the conquistador find the Fountain? Are he and his Queen now immortal, living in the 21st century as husband and wife? Or are they reincarnations of their selves from a previous time?


Late in the film, the dying wife shows her just-completed novel to her husband, entitled THE FOUNTAIN, and we get the idea that the conquistador storyline is simply a visualization of the book. Eventually, it becomes clear that she has come to terms with her inevitable death, but her husband has not. Presumably, he eventually finds the cure, which makes him immortal, leaving him alive to float through the cosmos with the tree that grew on his wife’s grave, on a rendezvous with destiny in the form of a galaxy about to be born.
In other words, once you wade through the confusing cross-cutting, it’s pretty simple. The doctor can’t accept his wife’s impending death. She writes a novel in the hope of prompting a change of heart. She dies. He finds the cure too late. He uses it on himself. Then he has an eternity of time to contemplate and grieve.

One suspects that the film grew out of the image of Jackman’s character floating through space, and the scenario was concocted to “explain” how he got there, and why. It’s a beautiful image, and the concept of infinite introspection – thanks to immortality spent alone with one’s thoughts – may have had the potential for a high-class art film. Unfortunately, THE FOUNTAIN’s flamboyant three-way structure is more frustrating than enlightening, filling the frame with scenes whose import (if any) is seldom clear, portraying action and events that have little or no meaning to the viewer, because their rational and context is withheld until too late in the running time. By the time you’ve received enough information to put the pieces together, you’re well past caring. 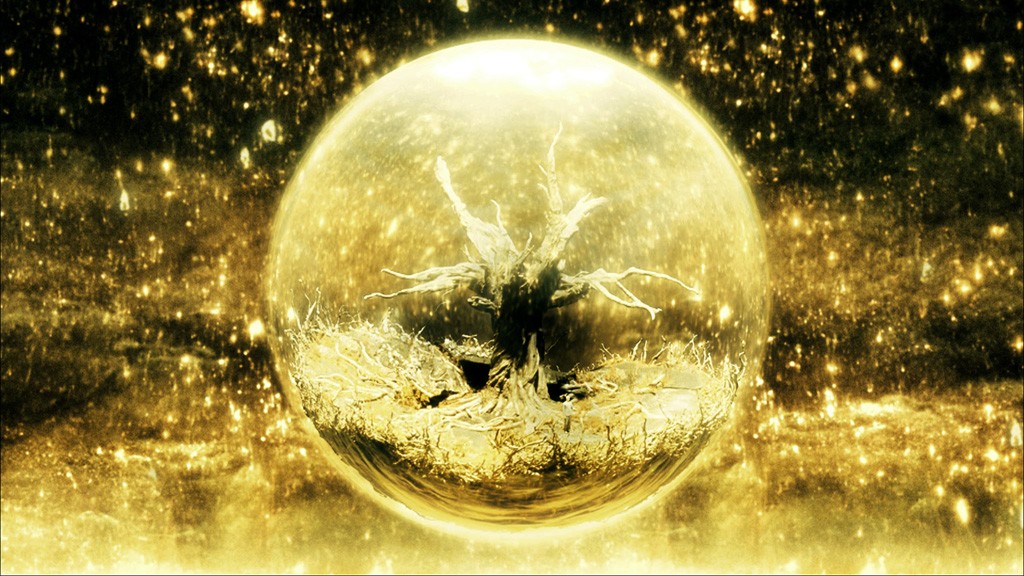 Even the talented stars can do little to enliven the material. Neither Jackman nor Weisz comes across as an “old soul,” so the suggestions of eternal love spread out over the ages never registers with the intended mythic force. This is a film that wants to take the pain of lost love and expand it to cosmic proportions. Sadly, as you watch Jackman slowly trawling through the infinite reaches of space, you may begin to feel that you, too, are trapped in a bubble for all eternity.
THE FOUNTAIN (November 22, 2006). Directed by Darren Aronofsky. Written by Darren Aronofsky, from a story by Aronofsky & Ari Handel. Cast: Hugh Jackman, Rachel Weisz, Ellen Burstyn, Mark Margolis, Stephen McHattie, Fernando Hernandez, Cliff Curtis, Sean Patrick Thomas, Donna Murphy.