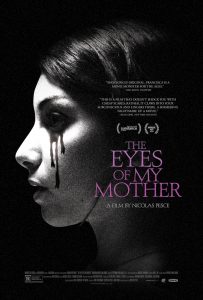 This emphatically grim art house horror film offers hypnotic visuals but lacks a clear vision of its central character.
The Eyes of My Mother is so effective in its use of a detached, observational style of art house horror that I wish I could declare it a mini-masterpiece, but I can’t. The black-and-white images, often filmed in static long shots, refuse to sensationalize the subject matter, instead allowing the inherent creepiness to gradually ooze into your brain. The camera angles and editing are minimalist in their technique, showing only what is necessary but always picking the right shot to tell us what we need to know – though “tell” may be too strong a word, since the film as often as not let’s you figure it out, in many cases with little dialogue to aid our understanding. The result is  emphatically grim, infused with a miasma of horror, even though little violence is actually shown.
What then is wrong with the film? Its central character, Francisca, is supposed to be a fascinating enigma, a distaff Norman Bates – both disturbing and, if not sympathetic, at least relatable. Unfortunately, her development and motivations are a little bit too muddled and arbitrary, betraying the film’s attempt to depict – without comment or judgment – an understandable and even in a sense natural (if bizarre) progression. Which is to say that, long before short running time terminates, we are no longer interested in her but only in what happens to here – which can’t happen soon enough.
The Eyes of My Mother is set in an isolated rural house sometime in the 1960s (i.e., before cell phones and GPS devices) As a young girl (Olivia Bond) watches her mother, a surgeon, display her craft on a cow’s head, cutting out the eyes. After a random serial killer bludgeons the older woman to death, Francisca’s father chains him in a barn, where Francisca keeps him as a “friend,” cutting out his eyes and severing his vocal chords to keep him quiet and complacent.
At this point, you may expect a feature-length replay of The Human Centipede, with Francisca practicing surgery on her friend. Instead, we jump forward ten or fifteen years to see Francisca as a young woman (Kika Magalhaes) around the time her father dies. Alone, she seeks companionship with murderous results, first picking up a woman in a bar, then having sex with her mother’s killer (and later killing him when he tries to escape), and finally kidnapping a woman with a baby.
Exactly what’s going on with Francisca is hard to say, and the film doesn’t care to let us know. The tryst with and killing of her mother’s murderer should have come before the episode with the woman from the bar; it would have made a more logical step in Francisca’s journey – the first kill that set her on the road to her later predations. She even echoes words the serial killer said to her earlier (killing “feels amazing”), implying she has earned a taste for it, but nothing follows from this. We also see her storing the dissected organs of her victims, but what’s the point? Are they trophies? Or tributes to the surgical skill of her mother? Is the chance to collect organs the reason she kills or just a fringe benefit?
The story gets more confused when Francisca keeps the kidnapped mother chained in the barn, blinded and muted like the serial killer before her. We might think Francisca wants a replacement for her former “friend,” but not so: she is now acting as a mother taking care of the kidnapped boy as her “son,” and (in contrast to the interaction with the serial killer) her only interaction with the new prisoner in the barn is daily feeding. Apparently, the only reason for keeping her alive is so that she can escape to precipitate the climax. Since this escape takes place after years of imprisonment, we have to wonder how Francisca kept the secret from her surrogate son as long as she did.
By the end, we are not sure whether Francisca is the product of her mother’s surgery lessons, the serial killer’s senseless violence, rural isolation that has left her almost completely unsocialized, or some vague combination of the three. All we know for sure is that she’s crazy, and surgically inclined when she gets the chance.
Fortunately, Magalhaes’s affectless performance is interesting to watch under the dispassionate gaze of the camera, and the writer-director Nicolas Pesce generates not only suspense but an ambiance of dread that sustains throughout the proceedings. The plight of the kidnapped mother is harrowing ; the scene of her discovery – her son sees what to him must appear a croaking monster –  offers the kind of low-key horror that almost couldn’t exist in a more conventional genre movie, filled with obligatory jump-scares and effects.
The Eyes of My Mother is roughly analogous to Franju’s wonderful Eyes without a Face, in the sense that both affect a non-exploitive art house approach that makes horror stand out in contrast like a bloody carcass tossed onto an intricate silk tablecloth. But as impressive as it is in some regards, The Eyes of My Mother cannot see its way clearly to a satisfying denouement. Ironically, a film with an almost hypnotic visual style lacks a fully realized vision of its own protagonist.
THE EYES OF MY MOTHER. Tandem Pictures, 2016. U.S. distribution by Magnet Releasing. Writer-director: Nicolas Pesce. With: Diana Agostini, Olivia Bond, Will Brill, Kika Magalhaes, Paul Nazak, Clara Wong. 76 mins. Unrated.