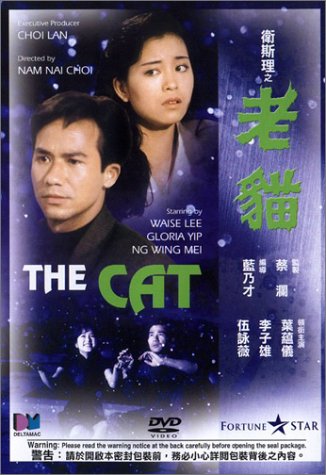 One of the joys of Hong Kong Cinema is the sheer uninhibited exuberance of their fantasy films. “Make-believe” seems to be the operative term when it comes to these over-the-top opera; unconstrained by credibility concerns, the filmmakers feel free to fly with every imaginative idea that floats through their creative minds. The results can be wildly outrageous and entertaining – or, in some cases, they can be a complete mess. LAO MAO (“The Cat”) offers definite proof that “wild and crazy” can result in “stupid and boring.” This haphazrd combo of horror, sci-fi, mystery, and action is such a botch that even hardcore Hong Kong film fanatics may have trouble sitting through it. Fortunately, there is at least one outrageous scene that makes uneasy jumble worth at least a single viewing: a knock-down, drag-out kung fu battle between a cat and a dog!
The simple story is very badly told, filled with absurd, confusing details that make the whole thing seem ridiculously non-sensical. Wisely (a popular recurring character, previously played by Chow Yun Fat but here embodied by Waise Lee) learns from a friend about a mysterious pair of neighbors, a middle-aged man and a young woman, and their black cat. Curious, Wisely tracks them down and sneaks into their apartment, where he is attacked by the cat. Wisely borrows a vicious dog to put the cat in its place, but it turns out that the strangers are really good guys – aliens from another world battling an evil monster on Earth! After his policeman friend is possessed by the bad alien, Wisely joins forces with the good aliens, leading a final confrontation atop a building nearly engulfed by the monster in a blob-like form. Along the way, bits and pieces are thrown in from RAIDERS OF THE LOST ARK (there is both the good and bad aliens are after an ancient artifact with a mysterious power) and THE TERMINATOR (after being possessed by the alien, the cop, now virtually invulnerable, goes on a lengthy shooting rampage, lovingly filmed in slow motion).
Despite the title, the cat plays a supporting role. The film is mostly about Wisely’s search for the aliens; the feline wanders in and out, only occasionally taking over the action. Which is too bad, because the human characters are a dull, poorly scripted lot, performed by a cast that never engages our interest.

The narrative twist (the mysterious neighbors turn out to be good guys) is bungled because the film reveals the truth about them long before Wisely discovers it; consequently, his pursuit of them lacks dramatic tension (we know he’s barking up the wrong tree). This weakens the already slack pacing and renders the film virtually unwatchable. It hardly helps that the alien girl is introduced as an enigmatic femme fatale but ultimately turns out to be just another scream queen. In a set-piece dropped into the flick just because it looks cool, she also displays the ability to fly – but then apparently forgets the skill when she is under attack and could use it to escape.
Even more illogical is the possessed cop’s assault on Wisely’s home. With the unarmed heroes cowering behind stacks of books, the alien-in-human skin opts not to simply walk the stacks and shoot his targets; instead, he stands in the middle of the room shooting at random objects. Books and bottles of booze explode in what is meant to be an impressive display of pyrotechnics (intercut with what must be the director’s favorite shot: spent shells ejecting from the gun), but the scene is simply silly and unsuspenseful.
The one partially redeeming scene is the cat-and-dog fight, set mostly in a junk yard, which does achieve a giddy sense of absurdity that becomes fun. It may not be “good” in any conventional sense, but it is so outrageous that it must be seen to be believed. Unfortunately, at least some of the shots were achieved – tastelessly and cruelly – with actual animals being tossed around. Thankfully, the majority of the dangerous action (flips, kicks, flops, and leaps) features rather obvious puppets, sometimes animated with stop-motion. Even here, however, the script undermines the effect: because we know (as Wisely does not) that the cat is one of the good guys, we can hardly root for the dog to defeat it, nor do we want to see the dog hurt, since it is simply doing Wisely’s well-intentioned bidding.

The special effects are unconvincing but occasionally fun. The monster scenes are mostly achieved live on-set with some disgustingly gooey prosthetics (the alien first manifest in the body of a dead homeless man, whose eyes fall out of the sockets!). The rooftop finale features some nice monster action, but the perspective of the composite shots is way off (the humans in the foreground look within easy reach of the creature they are supposedly avoiding).
The most absurd effect depicts the cat’s first tentative attempt at flying: panning the camera over the feline while is stands against a black background, it is supposed to look as though the cat, not the camera, is moving. At least the cat remembers how to fly at the climax, when it can use the skill to defeat the alien menace (by literally flying a timebomb down into the beast’s gullet!).
The Tartan Extreme DVD for THE CAT offers a bare-bones presentation of the film sans bonus features. Although the opening shots of Wisely overlooking his shimmering swimiming pool look rather classy, the overall picture quality is dingy, making the film feel cheap and shoddy. Even by the low standards of Chinese imports, the DVD’s subtitles are ludicrous; among other absurdities, the mysterious artifacts that the aliens retrieve from a museum are constantly referred to as “octagons,” even though their shape is, if anything, vaguely ovoid.
LAO MAO (“The Cat” a.k.a. “Thousand-Year Cat,” 1992). Directed by Ngai Kai Lam. Written by Gordon Chan, King-Ka Chan. Cast: Philip Kwok (Wang Chieh-Mei), Siu-Ming Lau (Errol), Waise Lee (Wisely), Chrstine Ng (Pai So), Gloria Yip (alien girl).