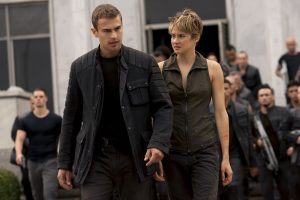 Insurgent, the second chapter in Summit Entertainment’s Divergent series, arrives over a year after the first film, but takes place only three days after the climatic battle that ended Divergent, where the heroine, Tris seemed to be heading with her boyfriend Tobias Eaton or “Four” towards the walled “outlands” of a futuristic Chicago, that has been divided into five factions. However, as Insurgent opens, we find that Tris and Tobias are now living in hiding among the Amity faction, led by the kindly Octavia Spencer.
Since I had forgotten much of what took place in Divergent, here is some background on the basic premise of the series, which no doubt will also be helpful for first time viewers:
In a Chicago of the future, survivors have been divided into five factions based on their abilities, temperaments and personal preferences. As the books author Veronica Roth explains, members of “Abnegation believe in selflessness, Candor believe in honesty, Dauntless are into bravery, Erudite value intelligence, and Amity value kindness, peacefulness and friendship. A person in the faction system believes that to be Faction less means to be without community, to be disenfranchised and on your own, and a failure in the most essential way. But, to someone who is Faction less, it means freedom.”
Insurgent gets off to a bang when Jeanine (Kate Winslet), the power crazed head of the Erudite faction has her soldiers ruthlessly search for Tris, and quickly discovers her in the commune like Amity faction. Jeanine also discovers a pentagonal shaped box that Tris’s parents had hidden away, with each side bearing the seal of one of the five factions. Apparently it contains an important message that may well determine the future direction of this dystopian society, but it can only be unlocked by a divergent person, who possesses qualities of each of the factions.
The good news, is that, unlike the second film in The Hunger Games series, Insurgent is not merely a thinly veiled remake of the first movie, but branches off in quite a different direction, as we explore the distinct world of the other factions in depth, as well as those who are “Faction less,” who turn out to be led by Tobias’ own mother, Evelyn (Naomi Watts). But can Evelyn be trusted, or is she just as power crazed as Jeanine is?
We also delve into a surrealistic dream world, more on the order of Inception, as Tris has to endure five separate dream-style tests in order to successfully unlock the secret of the box. Indeed, with her close cropped hair, and also facing a series of seemingly desperate battles, Tris becomes a sort of Joan of Arc figure, who like Joan, willingly surrenders herself to Jeanine, where she will have to undergo a trial by dream ordeal. Shailene Woodley also tends to recall the young Jean Seberg, who of course, was first brought to stardom in Otto Preminger’s film adaptation of George Bernard Shaw’s Saint Joan.
Interestingly enough, with it’s future society ruled mostly by very strong women characters, Insurgent also recalls the future utopia portrayed in John Boorman’s Zardoz, where the society is also made up of very separate and distinct factions, in a world sealed off from the outside. In fact, in one of Tris’s dream ordeals, she must overcome a surrealistic building on fire, where her mother is entrapped, that is flying through the skies over Chicago, much like Sean Connery had to endure, to enter the sealed off vortex in Zardoz.
Robert Schwentke takes over the directorial reigns from Neil Burger on Insurgent and gives the film a suitable fast pacing, with two brisk opening action sequences, which unfortunately are just a bit too overloaded to be believable, but then he settles things down, allowing the story to focus a bit more on the characters, as well as the action, which makes for a more pleasing blend, as Mr. Schwentke did so nicely with The Time Traveler’s Wife. The film also benefit’s greatly from it’s top-notch cast, with most of it’s young actors having gone on to important starring roles in other films after appearing in Divergent, and now being more familiar, bring a certain gravitas to their roles, as well as a few twists, especially in the characters played by Miles Teller and Ansel Elgort.