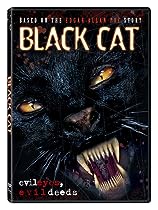 This no-budget piece of worthless shot-on-video drek seems to exist only to prove one depressing proposition: no matter how much you think you have plumbed the bottom of the barrel, the barrel goes yet deeper still. Writer-producer-editor Serge Rodnunskytakes the basic outline of Edgar Allan Poe’s story and turns it into what at first looks like a TV cop show, with a female detective questioning a husband whose wife and child have gone missing.  Hubby, apparently, had been going on one too many benders lately and taking it out on the family’s pet cat, but as the all-too-familiar – and extremely thin – storyline moves on, Rodunsky desperately throws in some pseudo-David-Lynch material, in which the detective visualizes herself in the suspects shoes. Is she psychic or just hallucinating – and does it really matter when the whole gambit is just an excuse for a girl-on-girl shower scene? (Don’t get too excited – the action here is just as boring as everything else in the film.) It all builds up to a lame double-twist conclusion that will have you shaking your head in exasperation (assuming you can rouse yourself from your coma long enough to uncramp your finger from the fast-foward button).
Needless to say, the essentials of Poe’s tale – which is really about how a once-good person can bring about his own self-destruction by surrendering to his darker nature – is lost in the mix, and the significance of the titular black cat – a symbol of guilt that returns after its apparent death to remind the killer of his crime – is eclipsed by all the extra-added nonsense.
As for production values, there are none. The video photography is not bad, but the handheld camerawork frequently looks amateurish. The performers might be competent with decent material, but the pacing is excrutiatingly slow – with long, long, long moments that leave the actors utterly unable to fill up the screen time with anything interesting. The results are supposed to register as heavy drama, but they look like a bad soap opera or a video recording of an actor’s workshop gone wrong. (As someone on MYSTERY SCIENCE THEATER once said, “This is an improv that just went nowhere.”)
Ultimately, this is not even a step above a home movie, lacing even the youthful enthusiasm of a student film. How it got a home video release is a real mystery; this wouldn’t even be worth seeing for free on YouTube.