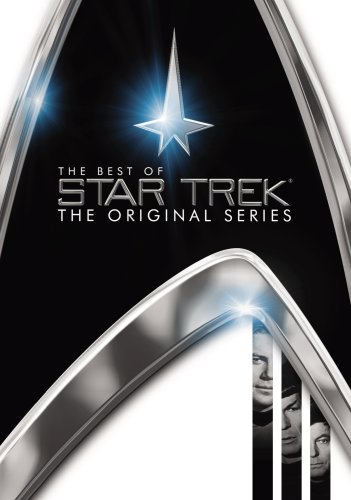 After over 4 decades of spin off series, a feature film franchise, novels, games and all manner of cultural ephemera, nothing for us has been able to match the beauty of the original STAR TREK series. In spite of the cheap sets and the occasionally lazy and trite scripts, there was a magic to the casting of Shatner, Nimoy and Kelley in the central roles that none of the subsequent series could recapture. The percentage of ground-outs was certainly higher than the intelligently written THE NEXT GENERATION, but what the show had was a kind of melodramatic passion that has its roots in the ’60s idealism that gave birth to it. The political, sexual and racial attitudes that were being upturned in the streets of America were finding voice – albeit though intermittently clumsy metaphor – on the bridge of the Enterprise. This gave the show a freewheeling, hip-shooting style that can never be duplicated.
“The City on the Edge of Forever”
When McCoy accidentally injects himself with a powerful hallucinogenic, he beams down to the surface of the planet they are orbiting, followed quickly by Kirk and Spock in pursuit. They arrive too late to prevent McCoy from running through a time porthole – the Guardian of Forever – into depression era America. Immediately after disappearing into the Guardian, the Enterprise disappears, and the Guardian informs Kirk and Spock that McCoy’s arrival in the past has changed the future. They follow McCoy’s path and arrive shortly before him. They find work with social worker Edith Keeler (Joan Collins in a no-kidding terrific performance) to earn enough money to rebuild Spock’s tricorder, but Kirk soon finds himself falling hard for Keeler. But once Spock’s tricorder is fixed, he discovers that Keeler was supposed to be killed in a traffic accident but was saved by McCoy – will Kirk allow the woman he’s fallen in love with to die do that the future to remain untainted? Universally regarded by fans and dilatants alike as one of the, if not the best episodes of the original series. Harlan Ellison’s script manages to combine hardcore sci-fi elements with a gentle and well thought out human drama, featuring one of the most gut-wrenching endings of any television show we’re ever seen:

“The Trouble with Tribbles”
After an emergency call brings the Enterprise at a starbase, Kirk is miffed to find that the emergency was fabricated by the station manager, hoping to bring the Enterprise in close proximity to help guard a miracle grain from a nearby Klingon cruiser. Once the Klingons arrive and request shore leave at the station, Kirk has no choice but to honor the terms of the uneasy treaty and allow them access. Meanwhile, interstellar snake oil salesman Cyrano Jones is selling small furry animals called tribbles, that happen to have an almost unlimited capacity to reproduce, spreading all over the space station and even consuming the grain. “Tribbles” was the show that every child who grew up on Trek looked forward to seeing on TV. The show was midway through its second season and the actors were all comfortable enough in their roles to get the most out of the show’s comic beats. Shatner and Nimoy are in particularly fine form here, playing off each other and guest stars William Schallert and Whit Bissell.
“Balance of Terror”
While on routine patrol near the neutral zone separating Federation space from the Romulan Empire, the Enterprise discovers that several Starfleet outposts have been destroyed by a high-level energy weapon wielded by a ship that can cloak itself prior to attack. The encounter a Romulan bird of prey on the Federation side of the zone, hoping to coax the Enterprise across the zone border in order to restart the war ended decades earlier. Kirk must match wits with the Romulan commander while preventing a restart of the war with the Romulan Empire. This first season episode wasn’t just the audience’s first glimpse at the Romulans; since the previous war ended before visual communication between ships was possible, no member of Starfleet had laid eyes on one before, either. This leads to a striking moment when the Romulan commander is first seen on the Enterprise’s view screen, bearing all the racial trademarks of Vulcans (Nimoy’s expression here is priceless.) The moment is rendered even more layered by the fact that the Romulan commander is played by Mark Lenard, who would go on to play Spock’s father, Sarek, throughout the remainder of the original series, and into both the film franchise and The Next Generation. It’s a beautifully done show, featuring the sort of complex lighting scheme that became an all-too infrequent guest during the budget-challenged later seasons, and a terrific performance from Lenard.
“Amok Time”
With Spock suffering from near-madness, Kirk risks his career to divert the Enterprise to Vulcan so that his friend can return home to the bride he married as a youth and complete the Vulcan mating ritual, the Pon Farr. After arriving, Spock chooses Kirk and McCoy, as his closest friends, to accompany him to the ritual. But his beautiful bride, T’Pring, has other ideas – she has brought forward a challenger for her affections, which means that Spock must fight for her. But instead of choosing her Vulcan lover to be her champion, T’Pring chooses Kirk to fight for her. This was never a favorite episode as a child, a feeling that I learned as an adult was actually a compliment to the show; these characters and their friendships felt so real to me, that it was incredibly distressing to see Kirk and Spock fighting to the death – particularly over some little hoochie that Spock clearly deserves better than! The show gives a very good sense of the Spartan way of life that the Vulcans have chosen, and the ceremony feels surprisingly well thought out when it would have been so easy for the whole affair to collapse into a giggle fest. Celia Lovsky is terrific as T’Pau, the powerful Vulcan leader who officiates at the ceremony. Her footprint in sci-fi would be extended in her final role in Soylent Green, as the elder who tells Edward G Robinson what that delicious stuff is made of.

Purists note – the four STAR TREK episodes collected here are the new versions with enhanced visual effects; we were very, very wary of this process when it was first announced, but the new digital effects have been done with great care. The just-released Blu-Ray set features both versions – and this would be ideal – but given the restrictions of SD-DVD we’re pleased with the enhanced versions. The transfers on the DVDs are pleasing, using the same masters created for the Blu-Ray set; though the detail in these can’t match the 1080p on that superb set, it’s the best that the show has ever looked in standard definition.
[serialposts]