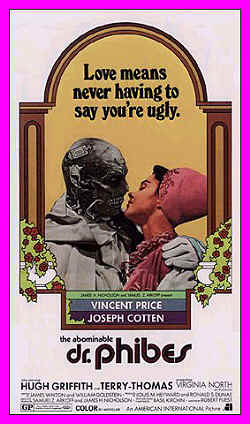 This is one of the best films from the end of Vincent Price’s career at American International Pictures (where he made a series of classic cult horror films during the 1960s). In fact, Price himself ranked it as one of his personal favorites; even though the acting challenge was a relatively modest one for him, the film played to the tongue-in-cheek style he had adopted in many of his later horror films, in which his hammy, over-the-top performances signaled to the audience that he wasn’t always taking the material seriously. Price plays Dr. Anton Phibes, a mad doctor (his Ph.D is in music!) who was horribly disfigured in an automobile accident while racing to see his wife in the hospital, where she was undergoing unsuccessful surgery that left her dead. His face immobilized by the accident, Phibes speaks without moving his lips by means of a gramophone attached to his neck. Director Robert Fuest uses Price more as an icon in a tableau than as a performer, emphasizing the lush art deco production design (courtesy of Brian Eatwell). The director’s deadpan camera style accentuates the campy approach, as Phibes gets away with one murder after another, each gruesome enough to make anyone cringe if taken seriously, all while being pursued by hapless Scotland Yard inspectors who seem to be always just one step behind him.

Set in 1925, the plot follows the mad musician as he kills off the surgical team behind the failed operation, using grimly imaginative methods (bees, rats, bats) inspired by the Old Testament plagues Moses called down upon Egypt (it seems Phibes also studied theology while getting his musical degree). Respected character actor Joseph Cotten (CITIZEN KANE) stars as the head of the surgical team, adding a touch of class to the modestly budgeted horror film and providing a solid, serious protagonist to balance Price’s tongue-in-cheek mugging as the villain.


The film is filled with marvelous visual touches: Phibes playing an organ that rises up out of the floor, then silently conducting a performance by a band of clockwork musicians; detectives trying to ‘unscrew’ a victim who has been impaled to a wall by a statue in the shape of a unicorn head; Vulnavia (Virginia North), the beautiful woman who silently assists Phibes in all his atrocities; and of course, the final-reel unmasking of Phibes’ burned features, followed by his embalming himself beside the preserved corpse of his wife (Caroline Munro), while the melody from ‘Over the Rainbow’ swells majestically on the soundtrack.
In a way, THE ABOMINABLE DR. PHIBES is the perfect combination of horror and humor, and during his later years Price said Mel Brooks had admitted to him that the film was the inspiration for YOUNG FRANKENSTEIN. Unfortunately, Price was not necessarily pleased by the homage, saying he found Brooks about as funny ‘as an open grave’ because he overdid the humor at the expense of the horror. ‘I think the ones like YOUNG FRANKENSTEIN become so comic that there is no fright,’ the actor complained. ‘It’s a delicate balance.’ 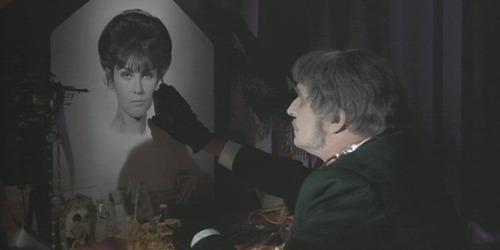 THE ABOMINABLE DR. PHIBES almost did not get made. Vincent Price’s more recent films for American International Pictures. (e.g., 1969’s THE OBLONG BOX) had not been up to the high standards of his early films for the company (ranging from THE HOUSE OF USHER in 1960 to THE CONQUEROR WORM in 1968). Also, the actor had been having disputes with the company’s owners, Samuel Z. Arkoff and James H. Nicholson, who were reluctant to pay him a higher salary to renew his contract after the old one lapsed with CRY OF THE BANSHEE in 1970.
Fortunately, Price settled his contractual differences with Arkoff and Nicholson and returned to AIP to do the PHIBES film. According to executive producer Louis M. Heyward, ‘A tennis player named Ron Dunas came to Jim Nicholson with a script [by James Whiton and William Goldstein, called “The Curse of Dr. Pibe”]. It was very ambitious but very strange.’
Dunas went on to co-produce the film with Heyward, who claims to have done an uncredited re-write to turn the script into a parody: ‘I did a re-working of it. When I was head writer for Ernie Kovaks [a star of early live television], Ernie used to do a take-off of Vincent Price. I did a re-write, which is Vincent playing Ernie Kovaks playing Vincent, which is what this film turned out to be.’
Apparently, several writers had a hand in the final draft, including Brian Clemens (creator of the tongue-in-cheek British spy series THE AVENGERS). But whoever was responsible for the script, the man most often given credit for the finished product is director Robert Fuest, a cult figure whose reputation rests on this film, its sequel, and the sci-fi opus THE LAST DAYS OF MAN ON EARTH. Fuest was a former art director who had turned to directing, learning his craft on several episodes of THE AVENGERS.
Fuest brought to the film both the lavish visual sense he had had learned from set design and the outrageous tone of THE AVENGERS, which asked audiences to laugh even though the programs were not, strictly speaking, comedies. In the director’s hands, the humor was the result not so much of content as of style: there are not that many punch lines; audiences laugh not at what happens but at how it happens, the deadpan style of the camera at odds with the tongue-in-cheek approach of the star – which is, in turn, at odds with gruesome murders featured in the plot.
Price, normally one to avoid auteurist praise in favor of crediting creative collaboration, gave high marks to his director: ‘I think Bob Fuest was one of the best directors I’ve ever worked with in my life because he was making a mad films and he’s a mad man!’
Thanks to Fuest, THE ABOMINABLE DR. PHIBES works because it exploited Price natural tendency toward self-mockery. Whereas earlier Price horror comedies like THE RAVEN (1963) had let Price get away with something not quite intended in the script, and whereas THE COMEDY OF TERRORS (1963) and the two DR GOLDFOOT films int he mid-1960s were straight out comedies, PHIBES had a story that could have been straight horror. It was the style and the handling that created the humor, and at last Price had a director capable of matching him note for note and getting the rest of the cast to do the same. A talented gallery of supporting players, including Terry-Thomas and Hugh Griffith, aided and abetted the insanity.
‘It was a total delight,’ says Heyward of working on PHIBES and its sequel. ‘The creativity was flowing around like crazy! Everybody contributed because Fuest encouraged that. You’d do a funny little shtick during the walk-trough, and he’d say, “Keep that in.” The business of Phibes having a drink [through an unseen hole in the side of his neck] – that was Vincent’s. All of the ticks and character pieces that these guys were playing with in their heads became part of those two pictures. I love that picture, and I love the sequel.’
Price made a point of playing the role relatively straight in front of the camera, knowing that it would come across as amusing on screen, thanks to the bemused twinkle in his eye as he successfully complete each murder. In this regard, he was helped by makeup man Trevor Crole-Rees, who developed Phibes’ appearance. Although Phibes briefly glimpsed skull-like face was achieved with a simple mask that took only two minutes to apply, the makeup the character wears throughout most of the film n order to look normal was more interesting.
Said Price, ‘We invented a wonderful makeup for it. They covered my face with colodium, which is like new skin, so that I really couldn’t move. The character spoke out of a voice box on his neck, so I learned the lines but never had to speak them, which made Joe [Cotten] very angry. He used to come up to me and say, “It’s not fair. You’re not speaking the lines, and I’m having to remember all mine and say them.’ I said, “Well, I remember them, Joe.”‘
Made for approximately half a million dollars, THE ABOMINABLE DR. PHIBES was a commercial success when AIP released it theatrically, earning $1.5-million. That was enough to ensure a sequel, which came out next year: DR. PHIBES RISES AGAIN.
The first PHIBES film also earned its share of critical accolades. Alan Frank (in his book HORROR FILMS) called it a “meticulous combination of fantasy/horror and humor.” Others disagreed. The OVERLOOK ENCYCLOPEDIA OF FILM: HORROR accused the film of a “crassly undergraduate approach, going for easy laughs rather than exploring the potential of the grotesque variations on generic cliches which the script and casting seem to promise.”
Price himself was quite fond of the film and its sequel. “I loved them,” he said. “They were brilliantly witty and cleverly thought out.” 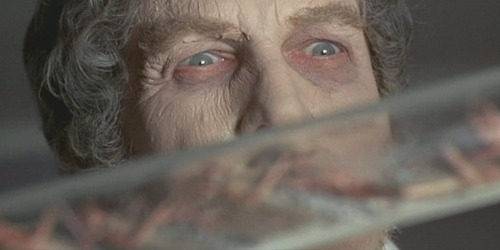 The introduction to a ROLLING STONE magazine interview with Anton Szandor LaVey credited the founder of the Church of Satan with being a “consultant” on THE ABOMINABLE DR. PHIBES, although his name appears nowhere on the credits and the story has nothing to do with Satanism. Director Robert Fuest, however, did at least meet (and probably hang out with) LaVey, and there are a few trivial similarities between the Anton LaVey and Anton Phibes, beginning with their first names. LeVay (whose real name was Howard Stanton Levy) was, like Phibes, an organist , and he supposedly had a set of clockwork musicians like the ones seen in the film. Rather bizarrely, LaVey claimed that the heavy metal music feared by many Christian fundamentalist was not the music of the Devil; rather, innocuous, upbeat tunes like “Telstar” (covered by The Ventures, among many others) were truly Satanic. So perhaps we are supposed to fear that “Elmer’s Tune,” “Close Your Eyes,” and the other songs whose melodies are heard on the film’s soundtrack are exerting some kind of subliminal Satanic influence on the audience.
As mentioned above, the music score for THE ABOMINABLE DR. PHIBES incorporates melodies from famous popular songs. Although these tunes are supposed to suggest the era in which the film is set (the 1920s), “Over the Rainbow” (from THE WIZARD OF OZ) was not written until 1938. Foreign language versions of the film apparently include different musical choices. Also, as with many American International Pictures releases from that era (e.g., THE CONQUEROR WORM, SCREAM AND SCREAM AGAIN), new music was substituted on the soundtrack when the film was released on videotape. (Fortunately, theatrical prints and television airings continued to show the film with its original soundtrack.)
Attempting to cash in on the film’s use of music, American Interantional Pictures released a soundtrack album. Strangely, the album does not consist of the actual soundtrack music, nor did it include original recordings the songs that were incorporated into it. Instead, voice over artist Paul Frees (heard at the beginning of 1953’s WAR OF THE WORLDS) sang new interpretations of the songs, each featuring his imitating the voices of a famous movie star (Humphrey Bogart, etc). Weird.

One danger to aging horror films is that one generation’s terror has a way of turning into the next generation’s camp. THE ABOMINABLE DR. PHIBES avoids this danger, because it was always, intentionally camp. Seen today, the film’s horrific impact may have somewhat diminished, but the humor – subtle and not so subtle – still works, and the extravagant stylistic flourishes are as impressive as ever. ABOMINABLE DR PHIBES remains a favorite among fans of Vincent Price – an extremely entertaining piece of ear-and-eye candy that plays to the horror star’s often overlooked penchant to send up his malevolent image.
THE ABOMINABLE DR. PHIBES(AIP, 1971). Directed by Robert Fuest. Written by James Whiton and William Goldstein. Cast: Vincent Price, Joseph Cotten, Terry-Thomas, Hugh Griffith, Virginia North.