Having spent the better part of the morning posting new articles about Ray Harryhausen, and digging up old ones from the CFQ archive, you would think I had nothing more to say about the revered cine-magician, who passed away today at the age of 92. Yet even after writing an obituary that attempted to asses Harryhausen’s contribution to cinefantastique, I feel compelled to offer a slightly more personal take. Harryhausen’s death has brought me to realize, more than ever before, the debt I owe him for the Sense of Wonder that not only drove me to write for Cinefantastique magazine, but also enriched the psychic space in my mind that interfaces with the so-called real world.
If that sounds a bit abstract and philosophical, let me put it a bit more simply: how we experience life depends very much on what is inside us. For example, depending on our mood, a ringing phone can be either an annoying interruption or a welcome respite. On a larger scale, how we feel about ourselves and the world, on a day to day level, is very much a matter of our own private inner world, from which we look out upon external reality. Mine, I am happy to say, is filled with magic, and much of that magic was summoned by Ray Harryhausen, in the form of myriad monsters and mythical creatures that paraded across the movie screen during my youth – and continue to parade across the mental movie screen that exists inside me.
Harryhausen’s work has been a part of my psychic space for so long that it seems almost from birth – as if an integral part of my DNA – but in truth I can recall that my first encounter was through JASON AND THE ARGONAUTS, which screened as part of a summer series at my local theatre when I was in grade school. No one who has ever seen that film, especially at a tender young age, can ever forget the astounding adventures, which include a giant walking statue, the gods of Mount Olympus, a multi-headed Hydra, and a virtual army of sword-fighting skeletons. Decades later, my mind recalls few details of that long-past afternoon, but I know I loved the film and never forgot it; years later, when I started to read about film, the name of Ray Harryhausen passed before my eyes, and I made it my business to catch his work whenever and wherever I could – which in those days was mostly on television and at the occasional revival screening.
Not all of the films are great. It is an acknowledged fact, even among fans, that Harryhausen’s films emphasized his special effects over story. And yet, they all have their charms, because Harryhausen’s effects truly were special. Emphasizing them may have been an example of the tail wagging the dog, but it was never an example of technique trumping artistry. For Harryhausen truly was an artist – a puppeteer, a performer. Like a diva, for whom the opera’s story is just an excuse to get to the arias, Harryhausen dazzled us, but his virtuoso technique was always hidden behind an ineffable layer of magic that was equal parts arcane craftsmanship and exuberant showmanship. 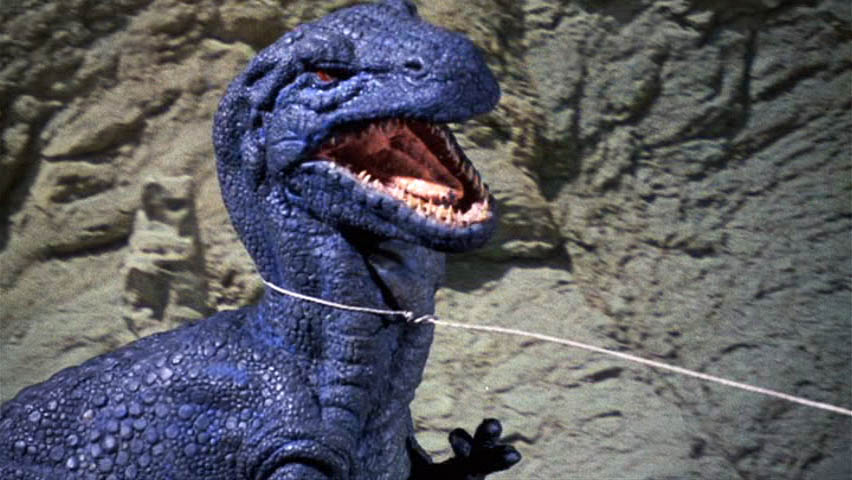 Harryhausen’s creatures had energy but also grace and even personality. Almost every character – whether a mythical monster or a prehistoric beast – seemed to have something distinctive. Even the allosaurus in THE VALLEY OF GWANGI – not the most expressive or sympathetic creature – betrays the occasional character tic (such as scratching its chin), giving the impression that this is not just any dinosaur but a very particular dinosaur – certainly like none you will see in any other film (unless that film features stop-motion effects by Harryhausen).
I don’t believe that any individual Harryhausen film matches the impact of his inspiration, KING KONG (1933), but the cumulative impact of his oeuvre is tremendous. Harryhausen never quite understood that Kong was impressive not merely because he was a giant ape but because he was a compelling combination of savagery and sympathy – a brutal killer that could chow down on a hapless human one moment, then go starry-eyed and sentimental over Ann Darrow (Fay Wray) the next.
Harryhausen’s films worked on a simpler, more child-like level – but the key point is that they truly did work on that level. In a strangely paradoxical way, the limitations of the stop-motion technique (single-frame photography renders a moving image that is somewhat stroboscopic) yielded an amazing dividend in Harryhausen’s hands: the unreality of the image increased its fantastic appeal, rendering it slightly unbelievable yet perfectly and timelessly appropriate for an incredible world of the imagination that appeals to children of all ages.
When I think back upon all the wonder that Harryhausen bestowed upon me, all for the price of a few movie tickets, I suspect that, between the two of us, I am the one who profited the more. MYSTERIOUS ISLAND and THE GOLDEN VOYAGE OF SINBAD, along with JASON AND THE ARGONAUTS, remain among my favorite films, their magic undimmed by the cynicism of my now much older eyes.
I guess that is the legacy of Harryhausen that will endure – the ability to keep alive the inner child within us, so that we may continue to see his films as we did when we were young, regardless of the more sophisticated demands our adult selves may make of other movies. For me, this legacy will always be best expressed by Tom Hanks’ enthusiastic declaration, during the presentation of Harryhausen’s lifetime Academy Award:*

“Some people say CASABLANCA or CITIZEN KANE. I say JASON AND THE ARGONAUTS is the greatest film ever made.”

Was Hanks completely serious? Probably not. Yet he spoke for the child, wide-eyed and amazed, who lives inside everyone who has ever enjoyed the magic of Ray Harryhausen.
For a perhaps more eloquent reaction to Harryhausen’s death, I heartily recommend Tim Lucas’s post “He Moved Us” at Video Watchblog.
FOOTNOTE