“Cartoon Network, Warner Bros. Animation and DC Entertainment are teaming up to present DC NATION, a full hour of exclusive kids’ television programming and shorts based on DC Comics characters. Full of action and humor, DC Nation brings some of the most beloved and legendary heroes — as well as some lesser-known cult favorites — from the pages of DC Comics to the screens of a whole new generation of fans.
Anchored by GREEN LANTERN: The Animated Series and YOUNG JUSTICE, DC Nation will premiere Saturday, March 3, at 10 a.m. (ET, PT).
Green Lantern: The Animated Series debuted in November 2011 on Cartoon Network as a special one-hour movie event and was greeted with much critical acclaim: Variety lauded the “beautifully rendered” series for its “bold, sleek design.” Now fans can experience the series again from the very beginning. With stunning, stylized CG animation,Green Lantern: The Animated Series takes viewers on a journey of cosmic proportions as Hal Jordan and his band of heroes fight to save the universe.
The second half hour of DC Nation will be comprised of new episodes of Young Justice, a series whichEntertainment Weekly called a “super-ior cartoon” with “a good dose of super-hero action.” The series continues with more adventures for Robin, Aqualad, Kid Flash, Superboy, Miss Martian and Artemis as they continue to try to prove themselves as superheroes while dealing with all the pitfalls of being teenagers.
Rounding out this branded block of original programming will be a number of shorts featuring DC Comics super heroes and characters as you have never seen them before. With fresh designs and concepts, fan favorites such as Plastic Man and Doom Patrol will finally take center stage next to the likes of Wonder Woman and Teen Titans. Bringing them to life will be the result of a collaboration with some of the top talents in the animation industry, which include award-winning Aardman Studios (Arthur Christmas, Wallace and Gromit) with its stop-motion clay animation techniques, and the unique direction and character designs of Lauren Faust (The Powerpuff Girls, My Little Pony: Friendship Is Magic). In addition to these shorts, DC Nation will also feature event programming, interstitials, exclusive behind-the-scenes looks at theatrical motion pictures and an insider look into the world of all things DC Comics
Each week, check out new shorts and live events featuring DC Comics super heroes as you’ve never seen them before.
Hundreds of heroes, thousands of villains, millions of fans all make up the DC Nation, home of the world’s greatest super heroes.”

Sam Register, executive vice president for creative affairs at Warner Brothers Animation, revealed at MIP Junior (Kids Entertainemt Conference) that the next Batman animated series will be titled BEWARE THE BATMAN.
According World’s Finest,  the CGI animated series, set for 2013 will feature:

“… A classic-looking Batman teaming up with a gun-toting Alfred Pennyworth and a female ninja sidekick.
BEWARE THE BATMAN is executive-produced by Glen Murakami, and will explore the mythology’s more obscure villains, such as Professor Pyg, but also won’t shy away from featuring some of the more well-known Batman foes.
In the series, Batman will team up with a younger female sidekick named Katana. During the keynote, Register added that Katana will fill the sidekick role, but won’t be a replacement for Robin.” 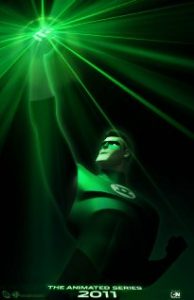 GREEN LANTERN: THE ANIMATED SERIES
Based upon the DC Comics super hero, the series is an all-new CG animated action series from Warner Bros.
As Earth’s Green Lantern, Hal Jordan is used to being in dangerous situations—but he’s never faced anything like this! Set at the farthest reaches of deep space, Hal must face down an invasion from the Red Lantern Corps. Hal is soon joined by an all-new group of heroes on a mission to protect Guardian Space —and the Green Lantern Corps itself!

I had never heard of “Professor Pyg” before — turns out he’s more an adversary of the recent  Dick Grayson/Batman Damien Wayne/Robin, rather than being one of the classic set of villains.