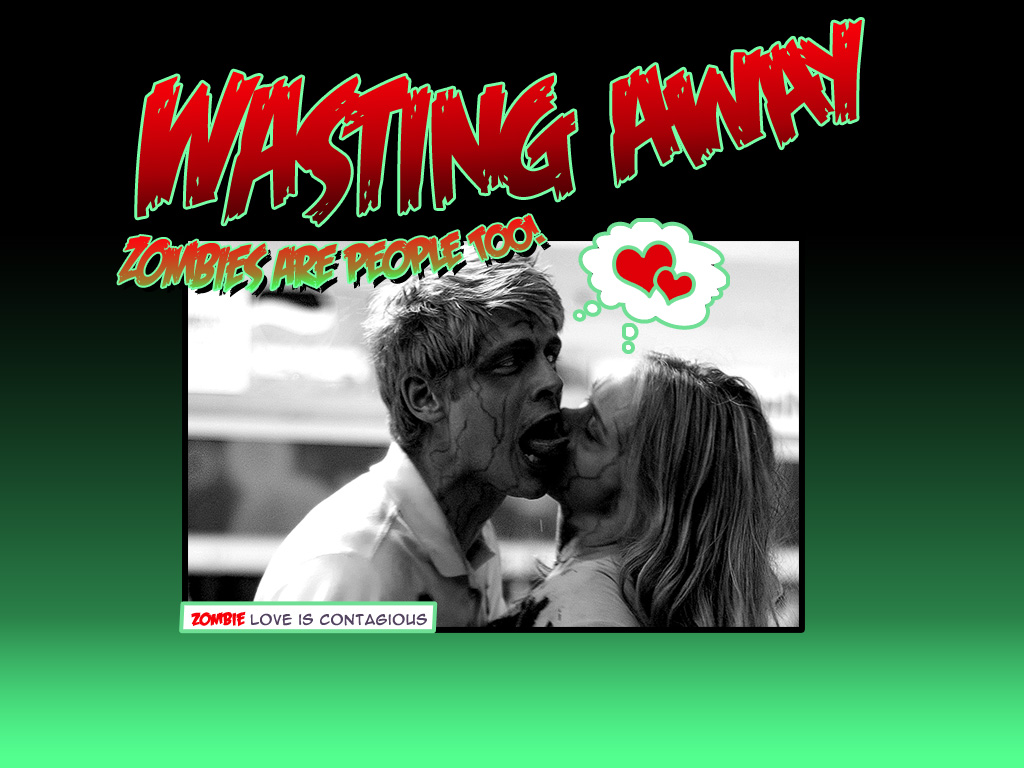 In WASTING AWAY, a tongue-in-cheek riff on RETURN OF THE LIVING DEAD, one of the characters has a penchant for creating weird food combinations, such as soft serve ice cream mixed with beer. Unfortunately, this culinary experiment hides the flavor of a toxic element that finds its way into the mix after a barrel falls off an army truck in transit. The four friends who eat the glowing green concoction die and turn into zombies; the joke is that they don’t realize they’re dead.

WASTING AWAY makes use of a clever visual gimmick: reality (in which the zombies are slow-moving corpses) is presented in black-and-white; meanwhile, the perception of the zombies (in which they see themselves as normal) is rendered in color.
For about fifteen minutes, WASTING AWAY gets a certain amount of mileage out of the concept of a confused quartet wandering the streets of Los Angeles at night, unsure why everyone they meet shrieks in terror and runs away – at accelerated speed. (The idea is that zombie brainwaves are slow, so the movements of normal people seem comparatively fast.) After that, the joke starts to wear out its welcome, and by midway point it becomes tedious.
WASTING AWAY looks good for its low-budget, but it has a slightly amateurish feel, as if a bunch of friends got together to showcase their talents. Scenes go on and on, so that each actor can do his shtick, and you find yourself wishing that someone in the editing room had had the nerve to say, “The routine’s not funny anymore; let’s move on.”
Even worse, as the story wears on, little uplifting, sentimental moments creep in – and creep in again – and they are presented as if we are supposed to take them seriously. Which is rather hard to do when one of the characters is reduced to a talking head carried about in a bowling ball bag (with holes cut out for the eyes, of course).
Still, there is at least one good line. When finally confronted with the realization that he is one of the walking dead, a characters says, “But I don’t feel like a zombie,” to which a cohort replies, “Idiots don’t feel stupid – but they are!”

WASTING AWAY won the audience award at the 2007 Screamfest horror film fesival in Hollywood, but it still has not secured a distribution deal in the U.S. 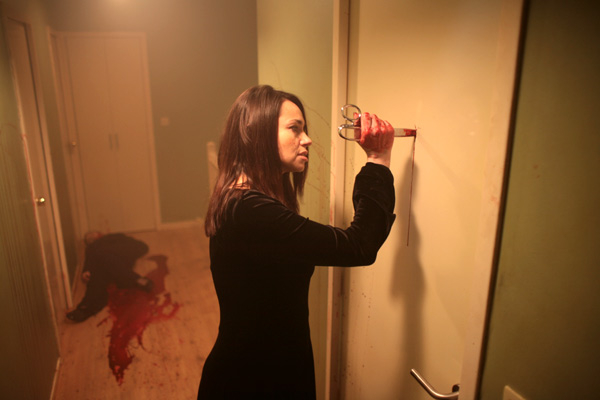 Beatrice Dall just can’t wait to use the bathroom!
The French film INSIDE (a.k.a., A L’INTERIEUR) begins as an utterly convincing, serious thriller with a great premise, before exploding into a deluge of graphic gore. The bloodshed is intense and brilliantly rendered, but it goes so far over the top that you wonder what it’s doing in a movie that seemed to have higher aspirations. END_OF_DOCUMENT_TOKEN_TO_BE_REPLACED