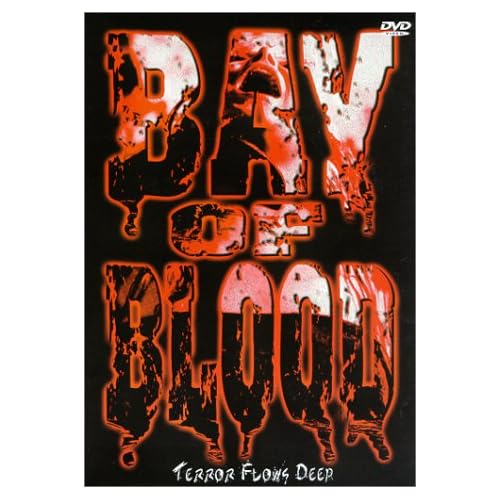 BAY OF BLOOD is one of the least reputable films from the late Italian cult figure Mario Bava, a genre specialist best known for the black-and-white horror classic BLACK SUNDAY (1960). There is a tendency to compare Bava’s later horror films – which utilized colorful photography and lurid subject matter – unfavorably to his early masterpiece; this is perhaps nowhere more evident than with 1971’s BAY OF BLOOD – a film that wallows in as much gore and violence as the worst piece of exploitation trash cinema. Jeffrey Frentzen, reviewing the film (under one of its many alternate titles “Twitch of the Death Nerve”) for the Fall 1975 issue of Cinefantastique, wrote:

The latest Bava work available for American viewing is the director’s most complete failure to date, heaping graphic violence onto one of his more ridiculous scripts. If you were appalled by the gore and slaughter of BLOOD AND BLACK LACE, this latest film contains twice the murders, each one accomplished with an obnoxious eye for detail (faces split open in loving close-up, decapitation, and murder of the axe variety). The raw violence is only an excuse to propel a silly story reminiscent of an Edgar Wallace cloak-and-dagger mystery

It is easy to sympathize with Frentzen’s sentiments: BAY OF BLOOD does look garish and exploitative side-by-side with the moody BLACK SUNDAY, and in retrospect, the film is clearly the forerunner of “body count” movies like FRIDAY THE 13TH (there is even a group of dumb young guys and gals, two of whom are impaled while having sex, as in the later FRIDAY THE 13TH PART II).
However, Frentzen’s assessment puts the bath before the blood: the silly story is only an excuse to propel the violence. Bava, the consummate visual stylist, uses the scenario the way a virtuoso musician uses a simple chord progression as an accompaniment for an inspired solo: the script sets the overall structure and tempo, but within that structure, Bava can squeeze in as many notes as he likes, creating something worth watching. The complex harmonies that would come from a well-devised script are nowhere to be found, but the improvised melodies are more than enough to sustain interest.
To be fair, the contrived scenario is not completely without interest. Throwing away the traditional “rules” of the mystery genre, the script piles on improbably absurdities in a way that keep the story surprising, offering multiple murderers with differing agendas. The opening prologue perfectly sets the tone: a helpless old lady in a wheel-chair is strangled to death; less than a minute later, her murderer gets a knife in the back, dying before he ever had a chance to enjoy the titular bay that he hoped to inherit. The sick joke is that you need a scorecard to keep track of the motivations (the film offers a series of flashback at the end to clarify the plot points), but ultimately it doesn’t really matter because, with a very few exceptions, everyone is guilty or at least complicit.
Throughout the film, Bava cuts away to lovely location footage of sunsets, woods, and water, creating a visual contrast with the violence and depravity of humanity. People kill each other in horrible ways, but nature remains indifferent, beautiful (though not without death of its own sort, as illustrated by the fly that expires immediately after the opening credits, plopping into the bay like a pebble). The biggest threat that mankind represents is not to itself but to nature: the killings revolve around an attempt to aquire the bay and develop it, destroying the natural beauty in order to turn a profit. (The film’s Italian title Ecologia del Delitto translates as “Ecology of Murder”.) By the finale, you will find yourself cheering as the final murderers are abruptly terminated by an unexpected (and unintentional) avenger in what has to be absolutely the greatest surprise ending ever recorded on film – at once horrible and laugh-out-loud funny!
One other note: Bava was a cinematographer-turned-director. BAY OF BLOOD is the first film since 1962’s THE GIRL WHO KNEW TOO MUCH for which he took credit in both capacities. Unfortunately, although the photography is brooding and atmospheric, it is not up to the visual qualities of his best work. Bava was most at home in the studio, where he had complete control. The location shooting here is good but a bit grainy; the use of available light, with little or no fill lighting, lends a slightly cheap look to the picture. Still, the interiors, especially during the long wordless opening sequence, show that he had not lost the ability to light a room with an atmospheric elegance that perfectly set the scene for murder.

Image Entertainment released BAY OF BLOOD under the “Twitch of the Death Nerve” title in 2001. The disc featured a “Murder Menu” that would take you directly to the numerous atrocities; a psychedelic-looking trailer (using footage of the film that has been heavily re-processed), under another alternate title, “Carnage”; two radio spots, a Bava biography and filmography, and trailers for other Bava films. Unfortunately, although the video transfer was acceptable, the soundmix elicited screams of outrage from Bava fans, who complained that the audio was incompetently handled, with tinny sound that alternately dropped out and swelled up.
In October 2007, the title was re-issued as part of the Bava Box Set, Volume 2. This version retains the bonus features from the old DVD, improves the audio quality to satisfactory levels, and adds a commentary by Tim Lucas, author of the Bava biography All the Colours of the Dark. This is typically in-depth and informative, although not quite up to the standard the Lucas set with his commentaries for BLACK SUNDAY and BLOOD AND BLACK LACE. Unfortunately, this disc is not for sale separately, only as part of the box set (although some rental stores may make it availabe as a discrete title).
In the audio commentary, Lucas offers some insights that might escape typical American viewers (e.g., the first victim is played by an actress who was a well-known star in Italy at the time, making her abrupt death particularly shocking). Also, he gives a good run-down of how the film came to be made (it was a sort of response to CAT O’NINE TAILS, a horror-thriller from younger upstart director Dario Argento). We also learn that BAY OF BLOOD was not merely dubbed into English but actually was shot in two different versions: one in English, one in Italian. The non-dialogue scenes are identical in both; whenever characters speak, the two versions use different takes, with some differences in execution and performance.
What is missing from the commentary is an assessment of where BAY OF BLOOD ranks in Bava’s oeuvre. Lucas mentions that horror star Christopher Lee (who had worked with Bava on HERCULES IN THE HAUNTED WORLD and THE WHIP AND THE BODY) was disgusted by the violence when he saw the film at a festival, and Lucas acknowledges that BAY OF BLOOD is a forerunner of the later slasher films. However, Lucas never quite makes a fully articulate argument for why BAY OF BLOOD deserves to be regarded more highly than its disreputable off-spring.
We do hear little hints as Lucas points out clever details and well done shots (like the close-up that resembles a full moon until a rack focus reveals it to be an eye). Obviously, Lucas does not believe the film is Bava’s “most complete failure,” but what does he believe? Is it a triumph of style over substance, or does he think the screenplay has some value beyond being a jumping off point for Bava to stage gruesome murders? Perhaps the closest we come to an answer is when he points out a cutaway shot to a Dune buggy after one of the many violent deaths: the grill and the headlights seem to form a smiling face, and as the shot serves no narrative purpose, Lucas suggests it is Bava’s way of telling us not to take the film too seriously.
I would tend to agree. BAY OF BLOOD may not be as refined as Bava’s greatest work, but it certainly is fun to see the maestro at work with his hair down, going for the grue with gusto. The film’s power to shock may have been blunted by the decades of graphic gore that followed, but it still shows that a little artistry can go a long way toward elevating subject matter of even the lowest common denominator.
RELATED REVIEW: Twitch of the Death Nerve 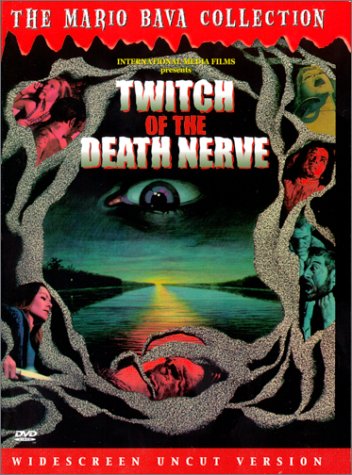