“Everything Wrong with TRANSFORMERS” was so much fun that we just had to let you see the follow-up, “Everything Wrong with TRANSFORMERS: REVENGE OF THE FALLEN.”
The Cinema Sins folks do a wonderful job of nitpicking their way through the sequel, which was even worse than the original – so much worse, that this video takes 20 minutes to recount the multitude of transgressions. If that sounds excessive, bear in mind that the entertainment-to-length ratio is far higher than that of the film being targeted. 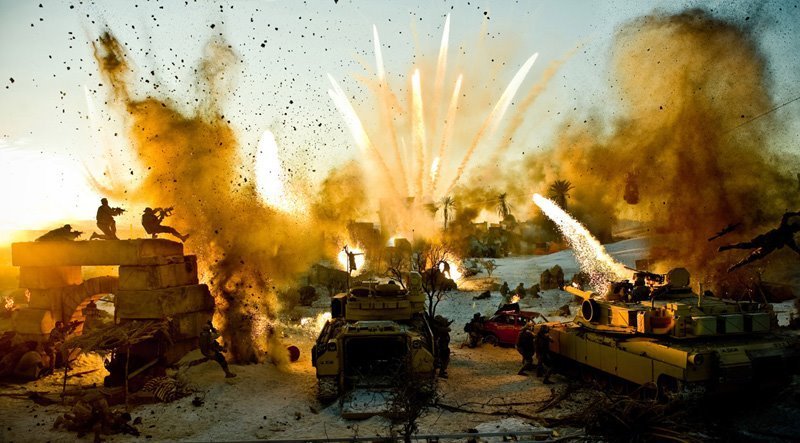 In another sign that cinefantastique rules the summer box office,  TRANSFORMERS: REVENGE OF THE FALLEN made its debut at #1 despite spite of overwhelmingly negative critical reactions. Michael Bay’s explosive sequel to TRANSFORMERS earned an estimated $112-million in over 4,200 North American theatres over the three-day span from Friday through Sunday. The added revenue from Wednesday and Thursday (the film opened mid-week rather than waiting for Friday) yielded a five-day total of $201.2-million – just shy of the five-day record held by THE DARK KNIGHT.
As for holdover horror, fantasy, and science fiction films…

No other critic is going to admit it, so it falls to me to declare  that director Michael Bay is an abstract artist whose work is continuously misinterpreted. The conventional wisdom is that Bay is a no-talent uber-Hollywood hack, who churns out formulaic action blockbusters in which story, characterization, and dialogue are flimsy pretexts for blowing shit up real good. What critics fail to understand is that Bay takes this approach and extends it one step further: the action and explosions are as much pretext as anything else in his films. Bay is not only eager to break with the traditions of narrative cinema; he wants to overthrow the conventions of mindless roller-coaster movies, in which a series of set-pieces deliver enough visceral entertainment to compensate for the weak storyline. Bay couldn’t care less about using camera angles and editing to orchestrate a decent suspense scene that would put you on the edge of your seat, nor is he interested in calibrating special effects, music, and sound design to deliver legitimate thrills. Viewed through his lens, all of that hardware flying around the screen, punctuated with pyrotechnics and saturated with geysers of flame and pillars of smoke, is merely raw material from which he can extract form and color. Yes, there are “actors” in his movies, along with “sets” and “props” – some of them physical, some of them crafted with computer-generated imagery – but in the end, all of them are simply blobs of light and shadow to be shot across the screen like paint spattered on a canvas by Jackson Pollack. The objects being photographed blur until they lose distinction, their form and function subservient to the aesthetics of kinetic motion, color, and composition.
What is most amazing about this achievement is that Michael Bay has presented his peculiar, idiosyncratic vision while working within the Hollywood studio system, under the guise of making movies that are perceived to be crowd-pleasing, mainstream entertainment with wide audience appeal – even while he resolutely refuses to deliver entertainment on the most basic level. In TRANSFORMERS: REVENGE OF THE FALLEN, Bay has at his hands numerous resources that could have been easily marshalled by a more conventional director. Given a rising young star like Shia LaBeouf, Bay deliberately uses camera angles, movement, and editing to split the actor’s performance up into a series of jigsaw puzzle pieces that barely fit, giving only the vaguest hint of a character portrait, our attention instead directed to the size and shape of the pieces.


Even more obviously, given Megan Fox, who is probably the hottest woman on the planet (Jessica Alba notwithstanding), Bay can barely be bothered to exploit her latent sex appeal. Like Goddard, who de-sexualized Bridget Bardot in CONTEMPT by filming her bed scene in alternating primary colors that rendered her nudity in abstract terms, Bay uses his over-powering cinematic technique to reduce the leading lady to little more than a glorified extra – her denim shorts, tight clothes, and low-cut blouses registering only as small fragments of the kaleidoscopic kinetic color scheme that is the true raison d’etre of TRANSFORMERS: REVENGE OF THE FALLEN.
Even the potential of the titular toys is undermined whenever possible. The fun of Hasbro’s Transformers is that they look impossible: there can’t possibly – or so it seems – be a way to unfold that car into a robot with arms, legs, and claws. And yet, it turns out to be completely possible – a challenging puzzle that engages the minds of children even as they are enjoying play-time with their toys. TRANSFORMERS: REVENGE OF THE FALLEN, like TRANSFORMERS before it, is unhindered by physical reality; therefore, Bay sees no need to present transformations that have been as rigorously designed as the toy manufacturers, by necessity, had to design theirs. CGI can do anything, so anything goes. There is no need to marvel at clever construction; you need only allow your eye to be dazzled by the shifting slabs of metallic hues as the robots bend and twist like origami viewed in a fun-house mirror.

Despite his meticulous attention to craftsmanship, Michael Bay has not yet fully achieved his artistic apotheosis with his sequel to TRANSFORMERS. He does lapse into conventional cinematic forms at time, much to his detriment (it’s no accident that his biggest box office bomb, THE ISLAND, was the one that tried to tell a straight-forward story without explosions, at least for its first act). LaBeouf gets in a line or two of dialogue. John Turturro is allowed to give something resembling a performance (not a subtle one, to be sure, but it still resembles traditional acting). Here and there a close-up lingers just long enough for the viewer to realize that Megan Fox is, indeed, a fox.* An occasional joke elicits a laugh. A stunt looks like a part of the story instead of an Olympic event. A piece of shrapnel seems to threaten a character in a manner that almost makes you fear the impact rather than cheer on the beauty of motion-color artistry.
Bay’s most unforgivable lapse  in TRANSFORMERS: REVENGE OF THE FALLEN comes when he lets the screenplay present exposition intended to justify the action. Bay seems to realize that no one cares what the Decepticons are up to or why super-powerful Autobots need LaBeouf’s puny character for help; nevertheless, he includes these moments, perhaps out of a sense of obligation to the studios unwittingly funding his excursions into experimental cinema.
Fortunately, these lapses into conventional narrative form take up only a tiny fraction of REVENGE OF THE FALLEN’s two-hour-plus running time. Even more fortunately, when Bay gets back to the action, he shows no desire to pay his audience back for having forced them to sit through the tedium. Staying true to his unique vision, Bay insists on botching the promised throw-down between Optimus Prime and the Fallen. The thrill of victory after a hard-fought battle is almost as alien to Bay as the dramatic necessity of exposition. His is a purer form of cinema, at its best when unfettered by such quaint considerations.
We can only hope that he continues to explore this avenue, taking if further and further, until one day, perhaps, he ceases to photograph identifiable objects at all. With advances in computer-generated imagery, we look forward to the day when Bay indulges in a purely abstract phantasmagoria of sound and color, whose shapes and sizes are dictated only by the director’s imagination, not by the face and bodies of actors; their movements coordinated not according to some unnecessary “plot”  but choreographed like a dance; the soundtrack score serving not to convey an illusionary sense of emotional investment in plot or character, but freed to work purely in rhythmic and melodic terms.
‘Tis a consumation devoutly to be missed, but until that glorious day arrives when Bay delivers his perfect masterpiece, we must be content with the psychadelic stylings of TRANSFORMERS: REVENGE OF THE FALLEN.
FOOTNOTE:

Helicopters fly into battle with the Transformers.
[serialposts]

Megan Fox confronts a small Transformer in this clip from TRANSFORMERS: REVENGE OF THE FALLEN, the sequel to 2007’s blockbuster hit.
[serialposts]

Hollywood Reporter informs us that TRANSFORMERS: REVENGE OF THE FALLEN, which opened in only a couple of major foreign markets last week, nevertheless managed to blast its way to the top of the overseas box office charts, earning nearly $20-million in Japan and England. The sequel outperformed the opening of the original TRANSFORMERS film in both territories.
Apparently foreign audiences have a taste for high-tech sci-fi hardware this summer, because the #2 film this week is TERMINATOR SALVATION, which grossed over $18-million overseas, after having been #1 last weekend.
[serialposts]

TRANSFORMERS: REVENGE OF THE FALLEN is coming out in a couple weeks, and it’s an easy bet that the sequel will be another blockbuster, like 2007’s TRANSFOMERS. Shia LeBeouf and Megan Fox are back in the leads. Michael Bay returns behind the camera. Robert Orci and Alex Kurtzman again worked on the script, this time with an assist from uber-hack Ehren Kruger. In case you haven’t already seen it, here is the film’s second trailer.
[serialposts]

Director Michael Bay is back with another film about those toys that turn into robots or something. The first one wasn’t any good, but it made a ton of money, indicating that Bay had finally found his true calling: making films for kids. Stars: Shia LaBeouf, Megan Fox, Josh Duhamel. Studio: DreamWorks SKG.
Check out the first theatrical trailer…
[serialposts]