It’s the return of the Cinefantastique Laserblast Podcast – featuring news and reviews of horror, fantasy & science fiction available on home video. In this installment, CFQ correspondents Dan Persons and Steve Biodrowski look at Tuesday, September 18’s current crop of releases, including INDIANA JONES: THE COMPLETE ADVENTURES, CABIN IN THE WOODS, and the complete seventh season of SUPERNATURAL. Also, they offer reviews of recent releases, BAIT in 3D and the “Mind-Bending” Blu-ray edition of TOTAL RECALL (1990). Finally, they take a look at the 2001 Canadian documentary, THE NIGHTMARE FACTORY, a look at horror makeup effects in general and at makeup artist Greg Nicoter in particular; it’s not available on U.S. home video yet, but CFQ fans should eagerly await its arrival so that they can see Biodrowski’s 10 seconds of fame as one of the interview subjects.

Actress Kate Beckinsale (wife of TOTAL RECALL-director Len Wiseman) talks about her first time playing the villain and about the film’s “reality versus illusion” theme.
TOTAL RECALL is a remake of the 1990 film starring Arnold Schwazenegger, about a man who pays to have an action-adventure memory-vacation placed in his brain, only to find out that he really is a spy – or is he? Len Wiseman directed from a new screenplay by Kurt Wimmer and Mark Bomback, based on Ronald Shusett & Dan O’Bannon’s adaptation of the Philip K. Dick short story “We Can Remember It For You Wholesale.” 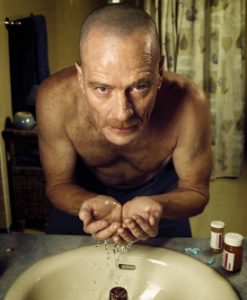