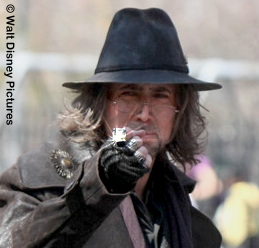 What did we ever do to producer Jerry Bruckheimer that he should want to pay us back by taking the beloved “Sorcerer’s Apprentice” episode from FANTASIA (1940) and turn it into a soulless summer snooze-fest that virtually defines everything wrong with would-be blockbusters? The new live-action version of THE SORCERER’S APPRENTICE has a trailer just barely good enough to make you hope there might be some fun to be had with the concept of a geeky college kid learning magic from a wizard, but almost every good moment has been squeezed into the coming attractions (and in fact some don’t even make it into the actual film). Viewers tricked into attending this magic show will marvel only at seeing their money go up the filmmakers’ sleeves.
After a prologue showing Balthazar (Nicolas Cage) capturing and containing the evil Morgana (Alice Krige), the story has physics student Davd (Jay Baruchel) identified by Balthazar as the “Merlinian,” a word so silly you wonder if the screenwriters are thumbing their nose at the audience. The Merlinian, it seems, is the only one with the power to destroy Morgana, which is really important because Balthazar’s old rival Horvath (Alfred Molina) is eager to release her so that she can resurrect a bunch of dead wizards and basically bring about the apocalypse, just because that’s the kind of thing villains of this type do. Dave thinks the magic thing is pretty cool, but he’s a bit of a slacker when it comes to practice, because he would rather spend time with Becky (Teresa Palmer), an old friend from grade school, with whom he has recently reconnected. Yeah, the world may be ending, but that’s no reason to interrupt your social life!

THE SORCERER’S APPRENTICE is remarkable consistent in its enervated presentation. There is no attempt to make us truly fear the coming confrontation with evil, nor is there much in the way of self-satire. Instead, the film settles for a vague kind of jokiness that seems distantly related to BUFFY THE VAMPIRE SLAYER (Dave’s just an ordinary kid, who happens to be fated to face the forces of evil). The “Karate Kid” relationship between Dave and Balthazar never really materializes; the training scenes just sit there like a hat with no rabbit, and the attempt at emotional bonding is tossed off with such indifference that you suspect the filmmakers themselves must believe in magic – i.e., that some miracle would turn all of this dross into gold.
Baruchel gives more or less the same performance he delivered vocally in HOW TO TRAIN YOUR DRAGON, which is at least enough to generate a few laughs – just about the only bright spots in the film. Cage coasts through trying to look cool; he barely even tries to register the script’s shifts from “humor” to “sentiment.” It’s as if he is belatedly trying to save his acting credibility by not wasting his talent on unworthy material, but he hasn’t quite taken the big step toward  adopting a camp attitude to express his contempt for the lousy movie he in which he is appearing.
Molina fares slightly better as the villain, but his best moments are in the previews – basically a handful of good lines that never add up to a compelling character. Toby Kebbell is mildly amusing as his young assistant – who fritters his genuine magical abilities away on a career as a flashy professional magician – but the character is wasted. The same can be said for Alice Krige (the Borg Queen from STAR TREK: FIRST CONTACT) and for Monica Bellucci (BRAM STOKER’S DRACULA, the MATRIX sequels), the latter of whom shows up as Balthazar’s love interest almost as if she were an afterthought in the screenwriters’ minds.
THE SORCERER’S APPRENTICE is virtually pockmarked with special effects, but except for a Chinese-type dragon and a metallic flying eagle, none of them are memorable; they simply shoot across the screen at regular intervals to interrupt the narrative tedium with a slightly different sort of tedium. With all the available CGI technology, it’s amazing that no one thought to orchestra a really great scene around it, let alone figure out how to build the effects toward a crescendo.


At times the action seems to have been generated at random to fill up the running time and give the characters something to do. You will lose count of the number of skirmishes between Balthazar and Horvath, with Dave in between, dodging plasma balls and other magical firepower. A sequence based on episode from FANTASIA is dropped in for not much more reason that to justify the use of the title THE SORCERER’S APPRENTICE. And in a transparently desperate effort to keep Becky involved in the climax, Dave has her climb an antenna tower to disrupt a magical stream of energy that is being relayed around the world – a scene knocked in a handful of shots that generate no suspense but lots of incredulity.
Rather like the recent THE TWILIGHT SAGA: ECLIPSE, THE SORCERER’S APPRENTICE is an exercise in not trying very hard – sort of a cinematic version of FIELD OF DREAMS (“Just shoot it, and the audience will come”). This approach can sell tickets to pre-sold viewers eager to visit their favorite characters on screen, but it’s hard to imagine anyone so besotted that they would fall for this second-rate magical routine. In the end, this sorcerer’s biggest trick will be making the audience disappear.

The folks over at Sci-Fi Wire have an exclusive new trailer for Jon Turteltaub’s (NATIONAL TREASURE, COOL RUNNINGS) fantasy blockbuster, THE SORCERER’S APPRENTICE, which you can see for yourselves below:
THE SORCERER’S APPRENTICE is is a live action re-imagining of the Mickey Mouse Sorcerer’s Apprentice segment in Disney’s FANTASIA , which in turn is based on the late 1890s symphonic poem by Paul Dukas and 1797 Johann Wolfgang von Goethe ballad (thanks Wikipedia). This version of the story is being produced by Jerry Bruckheimer and stars Nicolas Cage as the sorcerer and Jay Baruchel as his apprentice.
I’ve come to expect great special effects from a Bruckheimer film but the ones shown in this new trailer are particularly impressive. Not only are they technically lavish but Turteltaub also seems to be doing some really inventive things with the effects. We also get a good look at the central antagonist, Maxim Horvath, who is being played by Alfred Molina seemingly in full on SPIDER MAN 2 baddie mode. If there’s anything about this trailer that leaves me with any doubts about the film it’s Jay Baruchel who just seems to be plain annoying every time he opens his mouth.
THE SORCERER’S APPRENTICE is due for release on the 16th of July.
EDITOR’S NOTE: We had trouble getting Sci-Fi Wire’s video to show up on the website’s front page, so the video up top is the International trailer, which is essential the same. Below you can find the embed for the version from Sci-Fi Wire.


Walt Disney Studios releases this live-action fantasy film, allegedly a remake of its animated namesake, the Mickey Mouse sequence from 1940’s FANTASIA (an adaptation of Paul Dukas’s orchestral work, itself based on Goethre’s poem “Der Zauberlehrling”). It’s all about a sorcerer (Nicolas Cage) who is facing off against an evil nemesis (Alfred Molina), so he finds an apprentice (Jay Baruchel) to aid in the conflict. Monica Belluci, Robert Captron, Toby Kebbell, and Alice Krige fill out the cast for director Jon Turtletaub, working from a screenplay by Doug Miro & Carlo Bernard and Matt Lopez, derived from a screen story by Lawrence Konner & Mark Rosenthal.
Release date: Originally announced for Friday, July 16, THE SORCERER’S APPRENTICE opened on Thursday, July 15, beginning with screenings after midnight on Wednesday evening..
[serialposts]