Isabella Rossellini is wasted in a thankless, and colorless scientific villain role. I originally thought she might be head of the Brotherhood, as their leader in the comic strip is female.
The script offers no real surprises, as just about every plot development is telegraphed or predicable.
Despite all this, the film is actually fairly entertaining, particularly if you’re not already familiar with or attached to the character. It looks pretty good, with generally nice photography from DP Pierre Jodoin.
THE PHANTOM ends with a promise of further adventures. With some re-casting, a better costume (not necessarily 100 % comics-accurate, just not so awkward-looking) and some refinements— such as not making the hero so dependent on a thousands of miles away support team—a series might have possibilities.
However, at the moment I’m not too anxious to see The Ghost Who Walks return to SyFy. 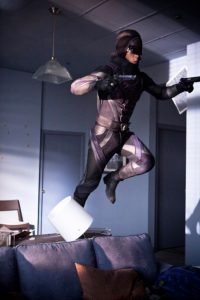 Sci-Fi Wire is featuring a 17-picture gallery of photos from THE PHANTOM mini-series.
Here’s Ryan Carnes (DOCTOR WHO), or more likely his stuntman, taking a flying leap. This is the “high-tech” replacement for The Phantom’s well-known costume.
All four hours are being shown this Sunday, June 20th, starting at 7 p.m. ET/PT.
The TV film from RHI Entertainment (SyFy’s FLASH GORDON) also features Isabella Rossellini (ALIAS) and Cas Anvar (PUNISHER: WAR ZONE).
It was written by Daniel Knauf (CARNIVÁLE) and Charles H. Knauf, and directed by Paolo Barzman (DR.JEKYLL & MR. HYDE, 2008).
Why does this ‘modern take’ on the legendary ‘Ghost Who Walks’ remind me of of that TV movie where The Hulk meets Daredevil (Rex Smith)?
TRIAL OF THE INCREDIBLE HULK (1989), for those who want to look it up.

RHI Entertainment has posted a new trailer for their TV movie of THE PHANTOM – which looks an expanded version of last year’s advanced trailer.
Ryan Carnes (DOCTOR WHO: Evolution of the Daleks/Daleks in Manhattan) plays Chris Moore, a young man that does not know he is really Kit Walker, next in line and unprepared to become the mysterious vigilante known as as The Phantom, scourge of pirates an evil-doers for centuries.
The two-part ‘mini’ is expected to air this June on SyFy. It’s from RHI Entertainment, which has produced a number of projects for the cable station, including the one-season FLASH GORDON update — also a King Features’ comic strip character.
The TV film features, among others,  Isabella Rossellini (ALIAS) and Cas Anvar (PUNISHER: WAR ZONE).
It was written by Daniel Knauf (CARNIVÁLE) and Charles H. Knauf, and directed by Paolo Barzman (DR.JEKYLL & MR. HYDE, 2008).
THE PHANTOM has the potential to spin off into a series on SyFy. It aired in Candada on Dec. 20th, 2009, without generating much noticable comment here in the U.S.
**UPDATE** May 3. 2010–  According to The Hollywood Reporter SyFy will air both parts of the four hour PHANTOM June 20th, 2010.