Part Four: Another Challenge For
The Green Hornet

The Green Hornet didn’t become a TV series until 1966, thirty years after its radio debut. It was the success of the ABC/20th Century Fox BATMAN TV show that lead to the greenlight for the Hornet.
Producer William Dozier had been chosen to produce the Batman series, and after looking at the source comics he had decided that the only way he could make it work would be to go in the direction of “camp” comedy; a straight-faced satire that coyly played up the absurdities. To be fair, the Batman comics that Dozier had to look at did not depict the character in the best light, as the books had become increasingly juvenile, due in part to censorship worries. This approach turned out to work spectacularly well for the ABC series, giving William Dozier a certain amount of freedom for his next project.


While Batman might not have been his cup of tea, Dozier apparently remembered the comparatively down-to-earth Green Hornet radio show in a more favorable light.
William Dozier had seen American born martial artist and former Hong Kong child actor Bruce Lee (Lee Jun Fan) demonstrate what he called Gung Fu. He was quite taken with Lee, and wanted to cast him in a TV series to be called NUMBER ONE SON, an update on the Charlie Chan stories, to feature the son of the popular detective character. ABC had passed on the idea of show starring an Asian leading man. However, The Green Hornet’s Kato was a secondary part that could be ideal for showcasing Lee’s talents. So THE GREEN HORNET could be a way of killing two birds with one stone.

While unknowns Michael Lipton and Jay Murray tested for THE GREEN HORNET with Bruce Lee, the lead role went to Van (Zandt) Williams, who had starred in the ABC TV series BOURBON STREET BEAT and SURFSIDE SIX (as the same character, Kenny Madison).
Van Williams and Bruce Lee took their characters seriously, and for the most part, so did the writers and production staff. Still busy with the demands of the BATMAN series, Dozier and Fox put Richard H. Bluel (THE GALLANT MEN, GOLIATH AWAITS) in overall charge as producer.


Since George W. Trendle (now insisting on being credited as sole creator of the character) had sold off  THE LONE RANGER characters to Jack Wrather, apparently (though perhaps not definitely) including Dan Reid, the Ranger’s nephew and Britt Reid’s father, a new back story and motivation for the Green Hornet’s crusade was created. Although only mentioned fleetingly on the air, the screen tests made it clear that Britt’s father Henry Reid had been framed for a crime by powerful political and criminal interests. The shame of this miscarriage of justice had driven him to an early grave. Britt was determined to fight this kind of corruption, and hopefully uncover the proof of his father’s innocence in the matter. 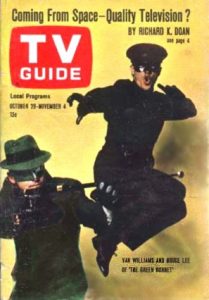 The dynamic of how The Green Hornet and Kato operated changed. While the Hornet remained the mastermind and a capable fighter, now Kato provided much of the implicit and  often explicit physical threat towards the villains. Van Williams’ Hornet was more like a masked, sinister Jim Phelps (ala MISSION: IMPOSSIBLE)  playing mind games with criminals to set them up. Kato was the quietly menacing enforcer. To many fans, Kato was more memorable, as nothing like the action moves Bruce Lee could provide had ever been seen on American television before.
However, the Hornet remained the star— possibly to Lee’s frustration. Nevertheless, he and Van Williams had a great sympatico onscreen, their attitudes when alone or with those privy to the secret suggesting a friendly and mutually respectful partnership rather then a “boss” and a subordinate. Oddly, while Kato’s physical prowess was played up, his inventive genius was not touched on (at least as far as I recall).
To the Hornet’s gas gun, the sonic weapon the Hornet Sting was added, using soundwaves to break locks and cause small explosions and fires. The Black Beauty, a heavily modified Chrysler Imperial was turned into a “rolling arsenal” by car customer Dean Jefferies, complete with rocket launchers and aerial surveilance devices.


An often-repeated sequence featured the Black Beauty rotating into view, hidden under the floor of Reid’s townhouse garage, clamped upside-down until needed. Using a combination of the full size car, and large scale miniatures, the Black Beauty exited the property through a raised wall section, through a courtyard, and out a secret door disguised as a candy mint billboard into a deserted alleyway.
Much to George Trendle’s displeasure, The Green Hornet and Kato would be depicted in eyemasks that covered only the top of the face. 20th Centry Fox had no desire to have to dub their lead character.  The production actually had a very difficult time with the masks, which they decided to fit with earpieces, like eyeglasses.

A rather sinister mask for the Hornet was featured in publicity shots and the first episode filmed, Programmed For Death. This outing featured both miniature high-frequency sound generators that impelled animals to attack, and a new formula for “perfect” synthetic diamonds –- as well a plan by a ruthless syndicate to flood the market.
However, this show was held back until the third broadcast, and the more prosaic The Silent Gun was the premiere episode, airing September 9th, 1966.
By now plaster casts had been made of the stars’ faces, so that new masks, more comfortable and with unimpaired vision for the action scenes could be made. These were rather less dramatic, and would go through several minor redesigns throughout the season.

Some standout episodes are The Frog is a Deadly Weapon, which starred former serial Shadow Victory Jory as one of the men who had framed Britt’s father. Alias The Scarf is an eerie entry, guest starring horror star John Carradine as the curator of a wax museum, and featured the return of a serial killer from years before, not content to be replaced in the public’s memory by the Hornet.
Bruce Lee fans would choose as a favorite The Preying Mantis, which brings the Hornet to Chinatown, and sets Kato in a Gung-Fu showdown against a young, arrogant and ruthless Tong leader (played by Japanese actor Mako).
Some of the directors of the series were veterans, such as Preying Mantis’ Norman Foster, (SWORD OF ZORRO, JOURNEY INTO FEAR), George Waggner (THE WOLF MAN) and William Beaudine (THE APE MAN). Director of Photography for the bulk of the series was Carl Guthrie (HOUSE ON HAUNTED HILL).
One of the most memorable parts of the show was the exciting jazz themes used for the titles and action sequences. Though often identified as simply a jazzed-up version of The Flight of The Bumble Bee, this is not the case. Composer Billy May took motifs from the classic Rimsky-Korsakov piece (and possibly some inspiration from Harry James’ 1941 Jazz interpretation) and wrote a new, brass-driven work used in the titles and in different arrangements as action themes. The title track, The Green Hornet Theme featured trumpet master Al Hirt’s performance, and a slightly different version Hirt recorded is also referred to sometimes as The Green Bee. Trumpet players and brass ensembles often keep the theme as a showcase number in their repertoires.
Despite the popularity of the new theme, George Trendle was annoyed at the substitution, as were a number of vocal fans, as noted at the time in Larry Ivies’ Monsters and Heroes Magazine.

In 1967 Gold Key produced a comic book series based on the TV show. It ran three issues, written by Paul S. Newman (according to Comics.org), who wrote the bulk of the Dell Lone Ranger Comics, and some of the newspaper comic strip continuity. Pencils were by Dan Spiegle, who did many comics for Gold Key, Including Space Family Robinson, the TV-show based Maverick –- even Scooby-Doo, before later moving on to DC and other companies.
There were two paperback tie-in novels, Whitman’s Green Hornet: Case of the Disappearing Doctor, by Brandon Keith, and Dell’s The Green Hornet in The Infernal Light by Ed Friend (former pulp writer Richard Wormser, based in part on the episode The Ray is for Killing.).

Coloring books, Halloween costumes and various toys, including a die-cast Corgi Black Beauty also formed the merchandising. These ancilliary markets would not last long.
The series faced a difficult problem, as ABC had insisted that THE GREEN HORNET be a half-hour action show, like BATMAN. However, BATMAN’s episodes were really one-hour shows cut into two parts, which saved money. They expected similar results from the new series, at essentially half the money— and it showed at times.
This was particularly evident from the need to shoot much of the action “Day For Night”; filming on location in normal daytime working hours with a blue filter, and sometimes the camera stopped down a little. Some directors handled this better than others, but in some episodes this artifice was painfully obvious—or simply confusing.  To try to save money and show ABC the idea, Dozier & crew made some two-part episodes, such as Beautiful Dreamer and Corpse Of The Year.


Perhaps because THE GREEN HORNET was not the campy fun that audiences  might have expected, it did not do as well in the ratings as its predecessor. Trying to attract more viewers, the last two-part episode, Invasion from Outer Space (produced by Stanley Shpetner, rather than Richard Bluel) was much more gaudy and offbeat, with outrageous villain “Dr. Mabuse” behind the science fiction-y shenanigans.
Van Williams and Bruce Lee even guest-starred as their characters on BATMAN in a two-part episode A Piece of the Action/Batman’s Satisfaction, seeming rather uncomfortable. All this last-minute fiddling was to no avail.
However, William Dozier would insist that the series was not cancelled after one season due to ratings. He maintained that he and 20th Century Fox could only find it worthwhile to continue making the show if it was extended into a full hour-long program and presented this fact to ABC. The network was reportedly open to another season of half-hour episodes, but not a hour-long show. So it was (possibly) mutually decided to end the series after 26 episodes.
This decision served to put THE GREEN HORNET in a bad situation when it came to syndication. With only one season’s worth of episodes, the show could not be easily ‘stripped’; shown five days a week, like a comic strip. Fewer stations ordered it, and for many years few people got the chance to see the program in its original form. 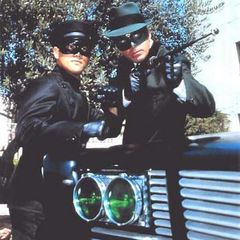 Even in the video tape and DVD era the show remains elusive as the complicated rights between 20th Century Fox, Dozier’s Greenway Productions, the character owners, and a third-party (and apparently legally defunct) licensing firm have kept both THE GREEN HORNET and  BATMAN from authorized video release.
However, the series memory was kept alive by the later success and enduring appreciation of Bruce Lee for his martial arts films, skills, and personal charisma.
To cash in on the star’s popularity, two feature films were cobbled together from several episodes, cutting in extra fight scenes from shows otherwise not featured, in a rather clumsy manner. Nevertheless, THE GREEN HORNET (1974) and FURY OF THE DRAGON (1976) seemed to do fairly well, making the rounds of second run theaters for several years and also remaining popular in Far East markets.

The rise of the comic book shop, where younger readers could find back issues also gave the character some minor exposure, as did syndicated repeats of the radio episodes, several of which also turned up on LP and tape.
Thus the short-lived series was kept alive in superhero fan’s minds, becoming almost by accident what’s considered by most the definitive version of the Green Hornet.