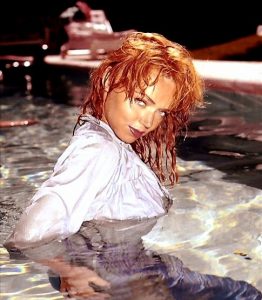 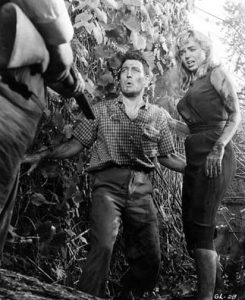 These low-budget films exposed her to a certain amout of risk and discomfort, she related that she was nearly impaled by the nails imbedded in a prop beam that went right past her head in 50 Ft. WOMAN.
Other genere-related roles would include ONE STEP BEYOND, playing a WAC in the comic strip adaptation THE SAD SACK (starring Jerry Lewis), the role of the Dark Witch in the teleplay DARK OF THE MOON, WHAT’S THE MATTER WITH HELEN (1971), TV movie THE DEAD DON’T DIE (1972), and EVIL SPIRITS (1990).
Yvette Vickers was also Playboy’s Playmate of the Month in July, 1959.
L.A police believe that Vickers, who had become somewhat reclusive in recent years, could have been dead for nearly a year before her neighbor acted on her suspicions and entered the home.