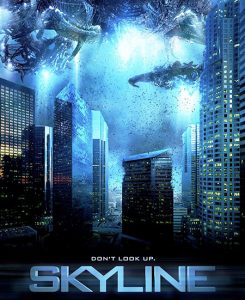 My greatest regret about seeing SKYLINE is that I paid full price ($12.50), and I took a date. So it was $25 to see a 1950’s Saturday matinee movie on CGI steroids.
It was actually fun, in a mindless sort of way. If I was 14 years old, I probably would have thought it was cool. Some of the things that transpire are fairly interesting and somewhat surprising, even halfway clever—though none of it has any significant payoff, emotional or otherwise.
30-something characters with no discernable last names, Jarrod (HAVEN’s Eric Balfour) and Elaine (Scottie Thompson, NCIS) have come from NYC to Los Angeles for Jarrod’s friend Terry’s (SCRUBS’ Donald Faison) birthday party. Terry has made good, apparently in the field of special effects, or as far as I can make out. This allows him to lead a lavish, somewhat libertine lifestyle in the penthouse of a fancy high-tech highrise.
After a night of heavy partying, they’re woken early to discover that strange blue lights are attracting people who are then snatched away by invading alien spacecraft. Jarrod nearly becomes one of them—more than once, and this light causes purple spider web blotches to appear on one’s face and body. They fade if the victim is pulled away from the light, but the characters are left to wonder what the effects might be.
There’s not much time for introspection, however— because though stuck in the building, there are various attempts to escape, lots of bickering between not-all-that-likeable people, and plenty of action with wild alien devices, creatures, and giant monsters. And it’s only a hair over 90 minutes long. 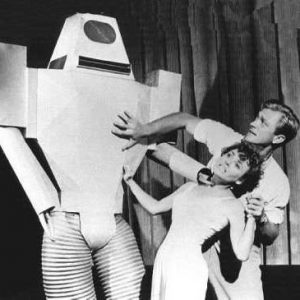 SKYLINE reminds me oddly of a cross between TARGET EARTH (1954) and INDEPENDENCE DAY, with little bit of THE WAR OF THE WORLDS mixed in. There are odd mechaniods that look like something from THE MATRIX, and monsters with a mix of tentacles and vaginal mouths that might resemble a nameless horror from H.P. Lovecraft’s nightmares. There are a lot of “borrowings” from various other productions, I suspect they even picked up a gimmick from THE OUTER LIMITS’ “The Architects of Fear”.
It really is very much like an old, low budget sci-fi B-movie—only instead of a modest handful of special effects, everything including the kitchen sink was tossed into the FX budget.
This shouldn’t be surprising, as SKYLINE is directed by FX artists The Brothers Strause (ALIEN VS. PREDATOR: REQUIEM). It apparently cost a half million to shoot, with around ten million spent on special effects. And on that budget, the FX are pretty damn good. 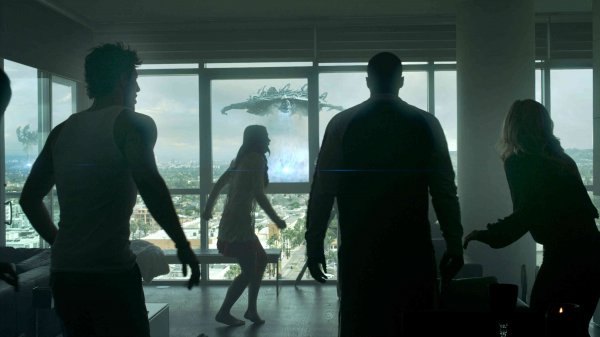 When was the last time a film with that low a budget played on so many screens? 28 DAYS LATER? LAND OF THE DEAD? Both of those are much more visceral and powerful films than this one, and they pretty much make sense. However, if you’re in the mood for action and spectacle while munching on popcorn, SKYLINE is reasonably entertaining.
Just try to avoid paying $12.50 to see it. I hear it’s going to Netflix right after it finishes its run. That could be soon.
Then again, I also hear they’re planning a sequel.