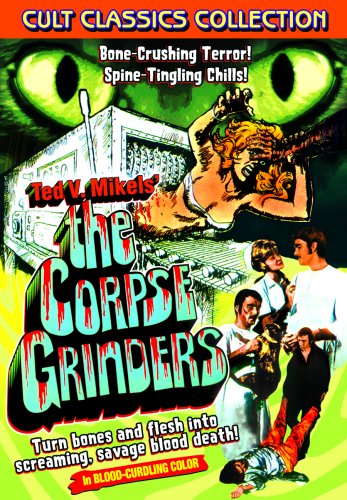 This ’70s exploitation sleaze has a single virtue, but it is one not to be underestimated: it is so ridiculous that one cannot take it seriously. Whether intentional or not (director Ted V. Mikels claims he intended a spoof of horror films), the result is that all of the myriad faults of THE CORPSE GRINDERS (silly scripting, bad acting, cheap sets, dingy photography) become part of the entertainment value, turning the film into a campy laugh riot.
The story follows a doctor and his nurse-girlfriend, investigating the death of a woman who was apparently killed and partially eaten by her pet cat. Working on the questionable theory that domestic felines can acquire a taste for human flesh (as tigers are erroneously said to do in the wild), the amateur detectives follow a trail that leads them to a cat food company. It turns out that END_OF_DOCUMENT_TOKEN_TO_BE_REPLACED