From their press release:

Director Steven R. Monroe stated: “Anytime you get to shoot a period piece project like JABBERWOCKY with sets, wardrobe, swords and creatures you are like a kid in the candy store. Also, when you get to assemble a great diverse cast to be in that atmosphere it adds yet another level of excitement. Everyone just kind of falls into place and into character when they land in all these elements and it’s just really fun as a director to be in the middle of all that.
Shooting in Bulgaria was a huge plus for this production, even with all the winter weather hitting us it just added to the whole vibe of the project.”
In this Sci-Fi/Fantasy tale, JABBERWOCKY chronicles the story of a young squire (Michael Worth) who, alongside his brother (Tahmoh Penikett), must become a warrior to save his people and the woman he loves (Kacey Barnfield) after a horrific beast is unleashed on the Kingdom.


American World Pictures’ Mark L. Lester and Dana Dubovsky and Bron Studios’ Aaron L. Gilbert serve as Producers, with John Raymonds and Bron’s Bernie Melanson as Executive Producers.
Says AWP’s Lester, “We are delighted with Steven’s work as director, his ability as a storyteller is remarkable. And the performance of the cast and crew were top notch.” 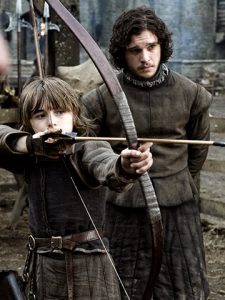 
See the link above for addtional pictures.

Steven Lang (AVATAR), who plays the warlord Khalar Singh in Lionsgate / Millenium Flim’s CONAN, told MTV that the new film will feature the supernatural as well as action.

“If you read Robert Howard — of course the ‘Conan’ stories and novellas — magic, (the) supernatural plays a huge, huge part in them: fakirs and magicians and wizards all over the place…  So magic is part of that world. The magic in this film, there’s a lot of it and there’s a lot of action-magic as well, a lot of magical fighting.”

His own character’s fights will demonstrate swordmanship, rather than  sorcery, however.


CONAN stars STARGATE: ATLANTIS’s Jason Momoa in the title role.
Marcus Nispel directs from a screenplay by Thomas Dean Donnelly,  Sean Hood , and Joshua Oppenheimer.
No specific release date has been set, though it’s expected to premiere in 2011.
Note: A commerical message may play first in this video clip, courtesy of MTV.

According to The Hollywood Reporter, casting has begun on CAMELOT, a series to be broadcast in the US on the premium STARZ cable channel.
Joseph Fiennes (FLASH FORWARD) has been cast as the wizard Merlin, while Eva Green (CASINO ROYALE) will portray Morgan le Fey.
Jamie Campbell Bower (TWILIGHT: NEW MOON) will play the young Arthur and Tamsin Egerton (THE MISTS OF AVALON) is set as the Lady Guinevere.
The series is an international production, to be shot in Ireland (with post production in Canada) by producer Graham King (FIRST BORN), and Ecosse Films.
CAMELOT is expected to debut on STARZ in early 2011.


The Los Angeles Times is reporting that fantasy artist Frank Frazetta passed away in a Florida hospital this morning, after suffering a stroke on Sunday; he was 82. For decades, Frazetta set the standard for fantasy illustrations, especially for the sword-and-sorcery sub-genre: his book covers and other artwork defined some literary characters, like Robert E. Howard’s Conan and Edgar Rice Burroughs’ Tarzan, almost as much as the the writings of the authors who created them.
Frazetta’s signature style (loincloth-clad men with rippling muscles and curvaceous women with bulging breasts) was immediately recognizable and hugely influential. Reading Howard’s Conan stories, one might or might not imagine Arnold Schwarzenegger in the role; after Frazetta’s illustrations, Schwarzenegger’s casting in CONAN THE BARBARIAN was almost inevitable.

Although his artwork inspired many cinematic visions of sword-wielding heroes facing off against menacing wizards and monsters, Frazetta himself worked directly on only one film: FIRE AND ICE (1983), which Frazetta produced with director Ralph Bakshi, was an interesting if not entirely successful attempt to bring Frazetta’s work to the screen via rotoscope animation.