Like the clash of demigods fallen to earth after the destruction of their home world, it was going to be glorious. Because of scheduling issues, Cinefantastique Online’s Steve Biodrowski and Dan Persons started their discussion of Zack Snyder’s MAN OF STEEL early, to be joined by Lawrence French at the usual start time. But thanks to the Miracle of Technology, the part of the discussion that preceded Larry’s arrival was lost, much like the noble civilization extinguished too soon by worldwide calamity, only to bequeath its one, last son to our lowly planet, sent to help humanity realize the greatness within it. Or are we over-dramatizing this thing, not unlike the way a certain director did with this weekend’s box office hit?
Never you mind. Even lacking the lost audio, our exploration of MAN OF STEEL remains wide-ranging and revelatory, well worth a listen. Then: Steve delivers his snap judgements of THIS IS THE END and HATCHET III, and Dan lets you know what’s coming to theaters this week.

Zack Snyder digs shooting on location… Henry Cavill loves his super-suit… Michael Shannon really appreciates Henry Cavill… We look into the creation of the eagerly-awaited reboot of the Superman franchise.
From the luxurious Cinefantastique Online studios in NYC, Dan Persons brings you up-to-date on what’s happening in the world of genre media.

There is nothing wrong with your television set – or you computer, iPod, laptop, whatever. The is fifth trailer from MAN OF STEEL, and it is supposed to look like an interrupted transmission.
Warner Brothers releases the PG-13 science-fiction film on June 14. Producer: Christopher Nolan. Director: Zack Snyder. Writer: David S. Goyer. Cast: Henry Cavill, Amy Adams, Michael Shannon, Kevin Costner, Diane Lane, Russell Crowe, Laurence Fishburne, Antje Traue, Harry Lennix, Richard Schiff, Christopher Meloni.
Watch a larger version of the video below, or click through the YouTube link.

Warner Brothers releases their reboot of the Superman franchise, which has been dormant since the disappointing SUPERMAN RETURNS (2006). Zack Snyder (SUCKER PUNCH) directs from a screenplay by David S. Goyer, from a story developed by Goyer and producer Christopher Nolan, based on the character created by Jerry Siegel and Joe Shuster. The film offers another origin story, with the young Kal-El being sent to Earth by his father Jor-El (Russell Crowe) and growing up with Martha Kent (Diane Lane) and Jonathan Kent (Kevin Costner) before turning into Superman (Henry Cavill) and confronting his father’s mortal enemy General Zod (Michael Shannon). Also in the cast are Amy Adams as Lois Lane, Laurence Fishburne as Perry White, Christopher Meloni ans Colonel Hardy, and Jadin GOuld as Lana Lang.
U.S. Theatrical Release Date: June 14 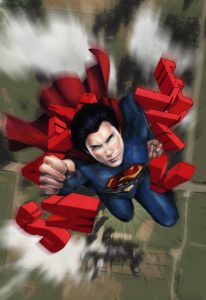 
The cover preview above  seems to include a well-rendered likeness of SMALLVILLE star Tom Welling as the Man of Steel, wearing the “New 52” version of the costume. The series finale had featured a mostly CGI version of Welling in what seemed like a mix of the traditional ‘uniform’ and the SUPERMAN RETURNS costume.
Henry Cavill, interveiwed by  reporter Chris Van Vliet from CBS-19 (Cleveland, Ohio) for IMMORTALS, talked about putting on his MAN OF STEEL  Superman costume for the first time.
The British actor  said “…To turn around and realize that I’m Superman… there’s no other feeling like it”, and said it was “one of the best moments” of his life.

Here’s an interesting collection of shots from the sets of Warner Brothers Pictures’ new Superman film, THE MAN OF STEEL.


Russell Crowe sports a wizardly look as Jor-El, father of Kal-El of Krypton.
In Vancover, subbing for a fishing town in Alaska, Henry Cavill’s Clark Kent seems to be going for a bearded, manly vibe.  Off “finding himself”, perhaps?

And it seems Amy Adams hasn’t dyed her red tresses to fit into the more tradional veiw of Lois Lane.
Of course, Noel Neil had auburn curls in THE ADVENTURES OF SUPERMAN, and the character has sometimes been depicted as a redhead in the comics.