Simon Pegg and Nick Frost are the actor-writers of two the very best comic horror films of the previous decade: SHAUN OF THE DEAD and HOT FUZZ.  SHAUN OF THE DEAD brilliantly and humorously used zombies as a metaphor for braindead slobs working braindead jobs, an appalling fate to which much of the populace can easily relate. HOT FUZZ tackled the excesses of the police-action-drama with a dollop of serial cult killers in an out-of-the-way town for good measure. Both of these films were brilliantly directed by Edgar Wright, who last year offered the incredibly offbeat videogame contest-as-comedy-movie SCOTT PILGRIM VS. THE WORLD, a film which connected more with its audience on video than it did in the theater. Unfortunately, Pegg and Frost’s latest offering, PAUL, doesn’t scale the same heights of inventiveness, though it is not without humor and some charm.
This time Greg Mottola (SUPERBAD) directed, and the setting and humor are pitched more to an American audience rather than a British one. PAUL gets off to a reasonably good start as two Brit fanboys, illustrator Graeme Willy (Simon Pegg) and writer Clive Gollings (Nick Frost), achieve their lifelong dream of attending the San Diego Comic Con, literally the world’s largest genre convention. Mottola effectively limns the milieu from costumes to dealer’s room to author meet-and-greets. The pair are particularly excited to meet their favorite sci-fi author Adam Shadowchild (Jeffrey Tambor), who has inspired Clive to write his own sci-fi novel featuring a green female Amazon with three breasts.
To round off their trip to America, the pair rent a Winnebago and tour famous UFO sites across the country, from Area 51 to Roswell, New Mexico. Along the way, they witness a car crash and encounter an escaping alien who has named himself Paul (Seth Rogan’s voice). Paul needs a lift north to sync up with his fellow aliens, and cajoles the starstruck pair into helping them. While he is a knowledgeable alien gifted with invisibility and other powers, he is also has a bit a fratboy; he smokes, drinks, and moons others in pursuit of his own amusement. Though Graeme and Clive are initially fearful of their saucer-eyed friend, they become fond of him and vice versa.
Adding to the fun is the introduction of RV park attendant Ruth Boggs (Kristen Wiig), a brainwashed Bible Belt babe who wears a T-shirt depicting Jesus shooting Darwin in the head with the slogan “Evolve This!” Confronted by an actual alien, Boggs finds all her preconceptions challenged and winds up embracing the kind of life she daydreamed about but never had the courage to pursue. Wiig demonstrates a very sure sense of timing, though jokes concerning her inept attempts to curse, unfortunately, don’t improve with repetition.
PAUL benefits for a great supporting cast who play mostly underdeveloped characters. Jane Lynch is mostly wasted as a waitress at an alien-themed café, though she reappears and gets off an amusing line to Wiig at the end. Adding a sense of peril, Clive and Graeme put a dent into a truck belonging to a pair of insensitive locals, David Koechner and Jesse Plemons, who accuse the pair of being gay. Agent Zoil (Jason Bateman) is charged by the Big Guy (Sigourney Weaver) with the task of bringing the escaped Paul back to Area 51, where for the past half century he was being pumped for information (including, in an amusing flashback cameo, the voice of Steven Spielberg) while his image was promulgated to keep the public from panicking once his existence became known. Zoil brings in a pair of inept but determined detectives (Bill Hader from SNL and Joe Lo Truglio from Reno 911!) to aid him in the recovery.
Adding to the fun are a series of references and insider gags best appreciated by long-time genre fans, with bits of dialogue and business copied from STAR WARS, CLOSE ENCOUNTERS OF THE THIRD KIND, THE X-FILES, E.T. (Paul specifically requests some Reese’s Pieces at a gas station stop, gets disguised as a kid in a costume, and possesses magical healing powers), and ALIENS. Some of the bits are obvious, while others, such as a bluegrass band playing the “Star Wars Cantina Theme” in a bar, are less so.
Though he sounds and acts much like the regular Seth Rogan, the Paul character comes off pretty well. The motion-capture animation here is not exceptional, but the character is emotionally expressive and demonstrates personality. The main difficulty is that the movie’s story loses direction near the end and resorts to replaying action movie clichés as the agents trying to recapture the alien close in while Paul visits his first human contact (touchingly played by Blythe Danner). Mottola simply doesn’t have the flair for action scenes that Edgar Wright does, and so these come off as slightly generic.
Like many modern movies, PAUL leaves a lot of destruction in its wake (the RV gets trashed, a house blown up, a couple of characters are killed in nasty ways), but there is no sense of consequence to these actions. Clive and Graeme proclaim the experience the best in their lives, but the movie doesn’t give any hint of what their regular lives were like, or whether they can afford to fix the things broken in their wake. 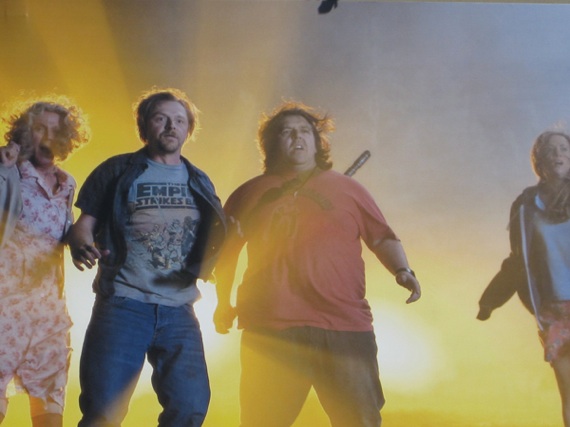 Pegg and Frost clearly work well together, but once again Pegg is the nervous Nelly who winds up romancing a girl, while Frost is the hopeless best buddy who becomes jealous that Pegg’s attention gets focused elsewhere. The film takes potshots at close-minded religious fanaticism (“You just can’t win with those people”), but doesn’t offer anything particularly profound or controversial.
PAUL is a pleasant enough diversion for science fiction fans, but in the end leaves us hungry for the conclusion of Pegg and Frost’s “Blood and Ice Cream” trilogy.
PAUL (March 18, 2011). Director: Greg Mottola. Writers: Nick Frost, Simon Pegg.
Cast:

Universal Pictures releases this science-fiction comedy, about two British comic-book geeks (Simon Pegg and Nick Frost) who encounter a smart-ass alien who wants to escape from the top-secret military facility at Area 51. Taking their new friend for a ride, our hapless heroes are pursued by federal agents and by the father of a young woman whom they accidentally kidnap. Greg Mottola directed, from a script written by Frost and Pegg. Seth Rogan provides the voice of the epynomous alien. Jane Lynch, Sigourney Weaver, Jason Bateman, Kristen Wiig, Bill Hader, Blythe Danner, and Jeffrey Tambor fill out the cast.

Fresh on the heels of the first images from the upcoming film THE GREEN HORNET, the first trailer for the movie starring Seth Rogan as the titular crime fighter made its way onto the internet for all to see. Check it out!
[serialposts]

THE GREEN HORNET is not due out until July 9, 2010, but that didn’t stop Sony Pictures from unveiling the new Black Beauty at this year’s San Diego Comic Book Convention. In the video, Seth Rogen, who stars as debonair newspaper publisher Britt Reid (alias The Green Hornet), has a few words to say about how faithful the big-budget feature film will be to the character’s past incarnations.
Starting this September, THE GREEN HORNET will be directed by Michel Gondry from a screenplay by Evan Goldberg and Seth Rogen, based on characters by Fran Stiker and George W. Trendle. Besides Rogen, the cast includes Nicolas Cage and Cameron Diaz.
[serialposts]