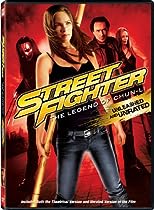 For those of you who came in late, powerful forces are converging on the streets of Bangkok in preparation for the ultimate battle, a war between terror and beauty, light versus dark, yin versus yang, and good versus evil.   The terror, the dark yang side, is led by Bison (Neal McDonough), who is not a fading animal on the American wild west plains but an ever present crime boss with endless power, whose past holds a shocking secret.  Bison’s syndicate, Shadaloo, is taking over the slums of the Thai capital, a task overseen by Balrog (Michael Clarke Duncan), a massively built enforcer and killer whom no one in his right mind would walk a green mile with.  Bison also has his horns and hide hoofed in with the voraciously vicious Vega (musician Taboo), a masked, talon-wielding assassin; part Wolverine and part the inscrutable Han man from ENTER THE DRAGON (1973), Vega’s weapon is tailor-made for slashing and stabbing attacks.  However, those of you who lived during the 1970s may remember that the Vega was a tin-can built car barely more powerful than a Ford Pinto.  The only difference is that a Pinto could explode, and Vega, like his car namesake, does not explode on screen – dud.
Anyway, as Bison instigates a wave of violence in the slum districts, grabbing power and land no matter what the cost to its residents, a champion emerges.  Chun-Li (Kristin Kreuk) is a half-Caucasian, half-Asian beauty, who is on a path of vengeance because Bison kidnapped her father.  Yet for her final chapter of revenge, she too has a secret weapon on her side: her kung fu master, Gen, who in the film is not a play on the official language of Togo but a once feared criminal who now fights for the forces of good because of the resulting trauma he inflicted on Chun-Li when he assassinated someone before her eyes.  So rising up out of the ashes of video game time is not a phoenix, but a new-look Robin (Shou, that is), a veritable shoe-in for an actor attuned into the real martial world and the unreal martial gaming world. 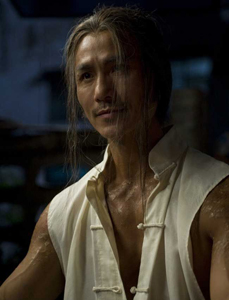 One of the smartest things the filmmakers of STREET FIGHTER: THE LEGEND OF CHUN-LI did was at the 11th hour cast the ruggedly muscular Robin Shou over Collin Chou and Kane Kosugi to replace Rick Yune as Gen, the former vicious killer turned kung fu master. This decision should have set the film up for a grand high noon spectacle far superior to the franchise’s earlier showdown, STREET FIGHTER (1994), which starred the late Raul Julia and the late-to-the-creative-choreography sweepstakes Jean-Claude Van Damme, who sadly made the film as exciting as an afternoon nap.
Unfortunately, this brings us to one of the most insipid things the filmmakers of STREET FIGHTER: THE LEGEND OF CHUN-LI did during the 12th through umpteenth hour: they did not use the talent of the only legitimate martial artist and kung fu star in the film.  In a twist of ironic coincidence without coincidence, Shou had actually worked for the enemy; I am of course referring to his first major Hollywood role in MORTAL KOMBAT (1995), more than a decade ago, when the Mortal Kombat and the Street Fighter video game franchises were the two most popular games of their time, vying for superiority.  After the MORTAL KOMBAT film pummeled and trounced STREET FIGHTER into the ground, in terms of both box office and cinematic kung fu choreography (MORTAL KOMBAT went on to become one of the highest-earning independent films of that time),  it led to the Mortal Kombat video game enjoying victorious sales.   After this defeat, it was not until 2009 that the other video game franchise stepped up to the camera again, and this time it was really personal as they snatched away KOMBAT’s golden boy and infused STREET FIGHTER: THE LEGEND OF CHUN-LI with one of the last few remaining legitimate legendary martial arts stars of yore.
Too bad it didn’t pay off. Someone should have said to director Andrezj Bartkowiak, “Yore approach is wrong.” The filmmakers disconnected their hard drive from the video game mythos and tried their hand at creating new legends. But to paraphrase Brad Pitt’s 1995 film, STREET FIGHTER: THE LEGEND OF CHUN-LI was more like LEGENDS OF THE FAIL, as it not only lacked punches but it also lacked punch.
Regardless of what critics say about martial arts film – whether it’s CROUCHING TIGER, HIDDEN DRAGON (2000) or the best kung fu film ever made LEGENDARY WEAPONS OF CHINA (1982) – the ultimate reason anyone really watches is for the action.  With Shou’s extensive experience in Hong Kong film, and with fight choreographer Dion Lam’s resume (the MATRIX films, 1998’s THE STORM RIDERS), the martial arts in STREET FIGHTER: THE LEGEND OF CHUN-LI should have been fantastic.  Instead, we see the worst either of these Hong Kong action veterans have ever done.
The fight choreography creativity is as weak as a squashed ant buried under two tons of rock.  Adding to the fights ineffectiveness was the almost whistling-like sound effects used during many of the wire-fu gags, stunts that made the actors look airy-fairy rather than loaded with magical martial arts skills.  Again, the travesty is that the only cast member who could have made the fights look as damaging as the video game was Shou.  Instead, the film uses actors and actresses who punch and kick with noodle-like arms and feet, while trying to cover up the inadequacy of their ability by using wire gimmickry and too many close shots during the fights.  If the sound editors had at least employed those over-the-top sound effects heard in early Shaw Brothers kung fu films, they might have sold the power of the techniques or at leasted created audio distractions from the flimsy martial arts maneuvers.
However, a wee bravo should go out to the filmmakers for casting Cheng Pei-pei (the original choice for The Oracle in THE MATRIX RELOADED), in a cameo as the mysterious shopkeeper Zhilan, the character who points Chun-li down the path to Gen. But “a-gen” it was not enough.
Rumor has it that a third MORTAL KOMBAT film is in the making.  Let’s hope they are intelligent enough to cast Shou as the rustic, ancient warrior Liu Kang who with age, humility and wisdom can lead his fellow fighters to take on Outworld in a new Inworld.