By any logic, the prehistoric creatures of the ICE AGE franchise should be extinct by now, or at the very least have migrated to the direct-to-video market, like their colleagues over at THE LAND BEFORE TIME had the grace to do. But no, here we are with ICE AGE: CONTINENTAL DRIFT, the 3D, CG-animated film in which we rejoin family mammoth Manny (voice by Ray Romano), irascible saber-tooth tiger Diego (Denis Leary), and wacky sloth Sid (John Leguizamo) as they deal with the break-up of Pangaea, an iceberg full of animal pirates and, for some reason, a teen mammoth (Keke Palmer) who just wants to belong to the cool gang (never mind the shifting of land masses that WILL VERY LIKELY KILL HER).
Cinefantastique Online’s Steve Biodrowski, Lawrence French, and Dan Persons went to see all the animal hijinks and weigh in on how the fourth installment of the ICE AGE franchise fares, whether the filmmakers are at all invested in these films at this point, and where the hell did all the humans go? Then, Steve takes a look at the genre elements in Woody Allen’s latest, TO ROME WITH LOVE, and Dan gives his thoughts on the paranormal thriller RED LIGHTS. Plus, what’s coming to theaters next week.

Dan Persons, Lawrence French, and Steve Biodrowski expand their minds to LIMITLESS proportions in the latest installment of Cinefantastique’s Spotlight Podcast, which focuses on the new movie starring Bradley Cooper as a man who achieves fame and fortune thanks to ingestion of NZT, an illegal wonder drug that allows users to reach their fullest potential. Complications ensue, in the form of withdrawal pains, Russian Mafia types, and a manipulative corporate big-wig played by Robert DeNiro. Is this sophisticated science fiction at its finest, or does LIMITLESS have trouble living up to its own higher aspirations? Listen in, and find out.

Relativity Media releases this science fiction-themed thriller, about a mild-mannered copywriter (Bradley Cooper), who discovers a top-secret drug that gives him superhuman mental and physical abilities (we’re talking about enhanced intellect rather than leaping tall buildings at a single bound, so we’re not quite into comic book territory). Neil Burger (THE ILLUSIONIST) directed from a screenplay by Leslie Dixon, based on the novel by Alan Glynn. Robert DeNiro, Abbie Cornish, Anna Friel, Johnny Whitworth, Andrew Howard, and Robert John Burke fill out the cast.
Just in case I missed any details, here is the official plot synopsis:

Bradley Cooper and Robert De Niro star in Limitless, a paranoia-fueled action thriller about an unpublished writer whose life is transformed by a top-secret smart drug that allows him to use 100% of his brain and become a perfect version of himself. His enhanced abilities soon attract shadowy forces that threaten his new life in this darkly comic and provocative film.

I do want to add that the “100% of your brain” nonsense is based on the popular misconception that humans uses only 20% of their brains (a myth spoofed in the Albert Brooks film DEFENDING YOUR LIFE). In fact, all of us use all of our brains; it’s just that only a small percentage of neurons fire at any particular time. You wouldn’t want them all firing at once – that’s an epileptic seizure.
At least the trailer gets extra credit for the soundtrack, which excerpts a cover of King Crimson’s “21st Century Schizoid Man.”

Paramount has sent out a press release announcing that STARDUST (2007) will make its U.S. Blu-ray debut on September 7. The good-natured fantasy film – based on the novel by Neil Gaiman – was previously available on DVD and Region 2 Blu-ray disc. The new Blu-ray disc will port over bonus features from the DVD release and add some new ones, including audio commentary and an extensive behind-the-scenes featurette. STARDUST was adapted for the screen by Jane Goldman and Matthew Vaughn; the later also directed. Claire Danes, Michelle Pfeiffer, and Robert DeNiro star.
Read the press release below:

Prepare for a magical journey filled with witches, pirates, maidens and true love as STARDUST makes its Blu-ray debut on September 7, 2010 from Paramount Home Entertainment. The epic adventure stars Claire Danes as Yvaine, the embodiment of a fallen star, who is pursued by the youthful and inexperienced Tristan (Charlie Cox) because he believes that retrieving the star will win him the heart of the village beauty (Sienna Miller). But a ruthless witch named Lamia (Michelle Pfeiffer) has other plans for Yvaine—she intends to eat her heart to gain eternal youth. As Tristan attempts to protect Yvaine, they encounter a number of wildly entertaining characters, including Captain Shakespeare (Robert De Niro), a much-feared seafarer who is partial to performing the can-can. Based on the novel by Neil Gaiman, the rollicking fairy tale is filled with action, humor and stunning visuals and will leave viewers believing in the power of true love.
The STARDUST Blu-ray features “Crossing the Wall: The Making of Stardust”, a new behind-the-scenes documentary that takes viewers on a journey into the supernatural kingdom of Stormhold, deleted scenes, a blooper reel, as well as a new commentary by writer and director Matthew Vaughn and writer Jane Goldman and a new featurette entitled “Nothing is True…”.
STARDUST Blu-ray:
The STARDUST Blu-ray is presented in 1080p high definition with English 5.1 DTS-HD Master Audio, French 5.1 Dolby Digital, German 5.1 Dolby Digital, Castilian Spanish 5.1 Dolby Digital, Latin American Spanish 5.1 Dolby Digital and Italian 5.1 Dolby Digital with English, English SDH, French, Danish, German, Castilian Spanish, Latin American Spanish, Italian, Dutch, Norwegian, Portuguese, Finnish and Swedish subtitles. The disc includes the following new bonus features:

The following previously released bonus features are also included on the disc:

This genre film is not very generic, which is to say it has a distinctive personality that sets it apart from run-of-the-mill fairy tale films. The personality happens to be British (despite the American stars), but that’s all to the better: the ghosts, witchcraft, flying pirates, and other fantastic imagery filling the film are treated with a distinctive touch of deadpan black humor that prevents STARDUST from lapsing into formulaic family fantasy film-making. It’s not Monty Python or HITCHHIKER’S GUIDE TO THE GALAXY, but if you have a taste for either of those, you should be on the correct wavelength to receive transmissions from this particular star.
The story follows young Tristran (Charlie Cox), whose father crossed the wall that separates an English village of Wall from an enchanted land, where a dalliance with a Princess in servitude to a witch resulted in the conception of our hero. In order to gain the love of the lovely Victoria (Sienna Miller), Tristran follows in his father’s footsteps, crossing the wall to retrieve a fallen star. The star, however, turns out to be in the lovely human form of Yvaine (Claire Danes). For reasons of their own, Yvaine is also being sought by the witch Lamia (Michelle Pfeiffer) and by the surviving heir to the magical kingdom (who has killed off his brethren to insure in ascension to the throne).
The coming attractions trailer does a poor job of representing the film, suggesting an insipid, almost childish comic fantasy. STARDUST contains humor to be sure, but it tends to be of the quirky, English variety, and the tone is distinctly adult, although children should be pleasantly amused. Contrasting with the whimsical charm and romantic adventure, we see witches divining the future by carving up the entrails of harmless animals; there is a wonderful running gag about the growing ranks of dead heirs to the throne, who must remain on Earth as ghosts until a new king is finally selected; and to top it all off, the film serves up a decapitation when Lamia grows tired of a rival witch. Not your typical Disney film by a long-shot.
One of the many droll highlights is Robert DeNiro’s turn as a pirate (who literally captures lightening in a bottle) named Captain Shakespeare. Although he poses before his crew as a threatening, murderous rogue, the captain has a softer, effeminate side that he reveals to Tristran and Yvaine in private. In plot terms this explains why he aids the besieged couple (who certainly could use some aid, considering that they are pursed by multiple villains), but the true value lies in the bizarre delights of seeing Travis Bickle turned into a transvestite. (The trailer’s brief glimpse of DeNiro is unimpressive; the revelation that he is hiding a personal secret makes sense of his off-kilter performance.)
Danes is lovely and convincing as Yvaine, a role that could have been a non-descript love interest. Being non-human, she has none of the personality quirks that distinguish the other characters; her only distinctive characteristic is her disparaging, almost but not quite modern “attitude” toward the naive Tristran. As the male lead, Cox initially seems too boyishly bland, but that is merely part of the film’s strategy, which charts his change into a dashing romantic hero. (If he can do it, there is hope for us all!) If one were forced to make comparisons, it would be to Orlando Bloom As Will Turner, but frankly, Cox has more genuine panache, and the romantic triangle in STARDUST is handled far more deftly than the belabored soap opera theatrics in the PIRATES OF THE CARIBBEAN sequels.


Peter O’Toole shows up for a few moments of fun as the dying king, who is amazed to see that he still have four out of seven sons living (he had killed his brothers long before his own father’s death). Rupert Everett generates laughs as the first royal heir we see tossed to his death by a rival brother. However, the real scene-stealer is Pfeiffer, who has not had this much fun on screen since playing CATWOMAN in 1992’s BATMAN RETURNS. As the evil Lamia, she makes Glenn Close’s Cruella DeVille in 1010 DALMATIANS look like a mildly annoying spoiled brat in comparison.
The only area where STARDUST sometimes falls to Earth is in the special effects department. The early attempts to wow the audience with visual pyrotechnics feel like a desperate attention-grabbing device, as if fearful that bored viewers will walk out if there is nothing spectacular in the first five minutes. The computer-generated imagery is distinctly lacking in magic and often ill-conceived; for example, the falling star is astronomical in approach, suggesting science-fiction rather than fantasy. Fortunately, at some point the filmmakers seem to realize that the effects work best when they are punctuating magical moments in the story; from then on, they augment the fairy-tale feeling of the film.
A bit like SHREK, STARDUST puts a spin on familiar fairy tales; this is, thankfully, not a made-to-order fantasy flick. The oddball elements may surprise viewers expecting something a bit more ordinary in approach, but the surprise should be a pleasant one, even for those without a predilection for quirky British humor. The nice thing about STARDUST is that, for all the knowing winks at the audience, it never undermines the magic and romance at the heart of the story, which works just as well as – in fact much better than – more earnest endeavors. It just goes to show that you can have your cake and eat it too, even with your tongue pressed in your cheek. 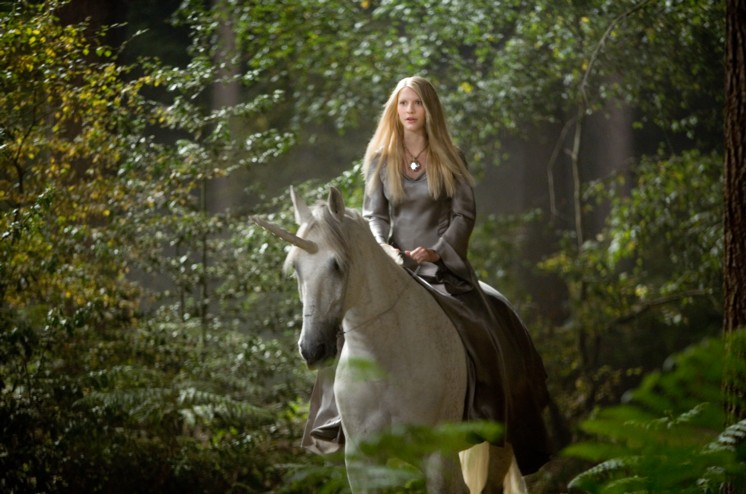