This is an entertaining new millennium update of Disney’s ESCAPE TO WITCH MOUNTAIN. That artifact from the 1970s is an early example of the studio’s attempt to remin true to their kid-friendly tradition while crafting a film that would appeal to a wider audience. The result was only partially successful – not quite juvenile enough to appeal to the usual Disney crowd (it made less than THE APPLE DUMPLING GANG, released the same year) but not nearly sophisticated enough to engage the teen and young adult viewers whose love of action and special effects would turn STAR WARS into a worldwide blockbuster two years later. Fortunately, RACE TO WITCH MOUNTAIN is a considerable improvement. Its scenario is so squeaky clean and chaste that it’s hard to imagine anyone objecting to having their kids view it, but the action is delivered with enough craftsmanship, humor, and even a semblance of suspense so that you almost forget you’re watching a Disney film in which no one is ever likely to be in any real danger.
The new screenplay by by Matt Lopez and Mark Bomback gets off to a great start introducing us to cabbie Jack Bruno (Dwayne Johnson), who is busy driving fares to a UFO convention – including a pair dressed like STAR WARS stormtroopers, followed by Dr. Alex Friedman (Carla Gugino), an expert on the search for extra-terrestrial life. By the time he ends up with two real aliens in his cab, the groundwork has been perfectly laid to modulate his reactions to these two strange kids, Sara (AnnaSophia Robb) and Seth (Alexander Ludwig) – who in all fairness seem no more weird than anyone else he’s driven recently.
RACE TO WITCH MOUNTAIN (which offers no continuity with ESCAPE or its sequel RETURN TO WITCH MOUNTAIN) dispenses with any kind of mystery about the origin of Seth and Sara. From the beginning, we know that they are aliens with special powers, not “witches,” and the “Witch Mountain” of the title becomes a somewhat arbitrary destination – no longer an escape route for two orphans to discover the secret of their origin, it is now an Area 51-type secret government facility where their crashed spaceship has been secluded.
With the mystery gone, the film concentrates on the “race.” Sara and Seth are pursued not only by secret government agents but also by some kind of cybernetic soldier from their home world; as if that were not enough, ex-con John Bruno has some old mod buddies who are mad that he no longer wants to drive getaway for them. With all this going on, there are more than enough crash crashes and gunfire to keep the adrenalin level high throughout the running time.
Of course no one is ever wounded, let alone killed (an overdubbed line of dialogue even informs us that an entire train crashes resulted in nothing more than a scratch or two), but at least the writers felt obligated to explain why the villains would be inclined to let our heroes live (since no one is likely to believe their unbelievable story, it’s not worth the paperwork that would be involved in killing them).
Thankfully, RACE TO WITCH MOUNTAIN has more going for it than bang-bam-pow. The essentials of characterization are deftly handled, and the performances are good, especially from Johnson, who manages to project decency without descending into schmaltz (there are supposed to be a couple moments where he has doubts about risking his neck for these kids he just met, but we know he will never run out on them). Ludwig and Robb (who was great in BRIDGE TO TERABITHIA) are fine as the new aliens, and it is nice to see Ike Eisenmann and Kim Richards (the alien siblings from ESCAPE) in cameo roles. Only Gary Marshall (in a small part as a UFO believer) falls a bit short; he’s funny enough, but the role seems tailor-made for a bit of high-powered cameo star casting.
There is also a continuing thread of clever humor, particularly in regard to the UFO convention. Although there are a couple swipes at sci-fi fandom, most of the jokes are leveled at the conspiracy theorists and advocates of belief in alien abduction (the film even takes a dig at Whitley Streiber). It may be an obvious joke to have the on-stage presentation interrupted by the intrusion of a real alien (whom the audience takes for part of the show), but the laughs generated are just as loud.
Ultimately, the film is a bit of a trifle but an amusing one. It’s the kind of movie-movie where the good guys are good and the bad guys are bad, and victory will be won at no cost and with relative ease. If there is a hint of romance between John Bruno and Dr. Friedman, it will not be expressed physically in even so much as a kiss (dont’ want the mushy stuff to turn off kiddie viewers), and the story is deliberately contrived to create an artificial family unit (two adults, two kids) without the messiness of anyone actually having sex. And of course, everyone will hug and be sweet to each other at the end.
In short, you have to supress your gag reflex and accept the film for what it is – a good-natured fantasy, deliberatly designed to be as inoffensive as possible. The miracle is that the result is not nearly as bland as it might have been, and even if you never cared for the old WITCH MOUNTAIN movies, you might be surprised to find yourself satisfyingly entertained. 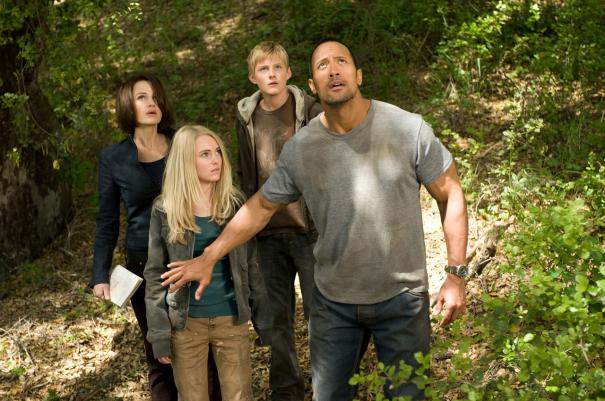