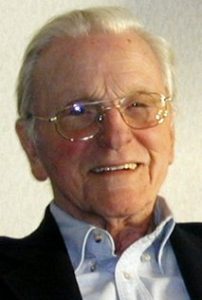 “A fierey Horse with the speed of light, a cloud of dust and a hearty ‘Hi-yo Sil-ver! The Lone Ranger Rides Again!'”
For most people who remember those words, they are indelibly related in the mind with the voice of radio/TV announcer Fred Foy.
Foy passed away yesterday, December 22nd, 2011 at the age of 89.
Begining as an actor/announcer for radio just before World War II, during wich he served in the Army’s Armed Forces Radio,  in 1948 Fred Foy was selected as the announcer for THE LONE RANGER radio series. He replaced announcer Harry Golden, and became the voice most associated with the series.
In fact, as Foy related with relish, he actually played the Lone Ranger in a single episode (March 29, 1954). Lead actor Brace Beemer had come down with a bad case of  laryngitis, and watched as his announcer played his role. Afterwards, Beemer, who had be one of the announcer/narrators of the series before replacing Earle W. Grasier as the Lone Ranger, said words to the effect of:  “Pretty good, Foy. Lets just say, I’ll never miss another show.”
Acting as well as announcing for WXYZ Radio in Detroit, where the syndicated shows originated, Fred Foy also played usually small roles on THE LONE RANGER, THE GREEN HORNET, and SERGEANT PRESTON OF THE YUKON. He would play Sgt. Preston a number of times, though I don’t have the details at hand.
When THE LONE RANGER debuted on television, the earliest episodes featured actor Gerald Mohr (ANGRY RED PLANET) as announcer/narrator. Though he possesed a fine voice, his grim  delivery was not what people expected, and the producers soon had Fred Foy record the shows opening and needed narration in his trademark high- energy style. These were done from Detroit and sent out to the West Coast, so he never worked with the TV cast.
Fred Foy gave the show a sense of breathless urgency and enthusiasm; you could tell he loved it. Having met him and heard him speak a number of times, I found out he really was a fan of high adventure. He subscribed to relatively recent pulp reprints of The Spider, according to then-publisher Rich Harvey, and delighted in appearing at Old Time Radio conventions, often announcing or playing the leads in THE LONE RANGER and THE GREEN HORNET, his voice having lost nothing of it’s power over the decades.
Fred Foy became an announcer for ABC, and narrated documentaries in later years.