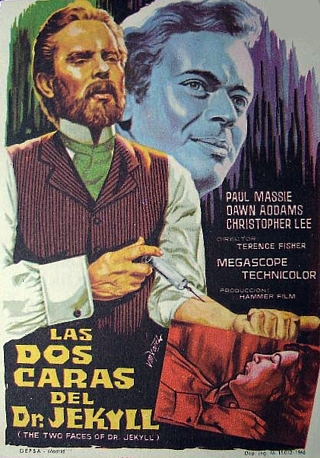 This imaginative and original take on the old Robert Louise Stevenson tale is one of the best and most underrated efforts from Hammer Films, the English company that had previously produced updated versions of Mary Shelly CURSE OF FRANKENSTEIN in 1957) and Bram Stoker (HORROR OF DRACULA in 1958). Bold and colorful, THE TWO FACES OF DR. JEKYLL (like Hammer’s version of THE PHANTOM OF THE OPERA, one year later) comes from an era when the company, having scored major box office success with horror, was pushing the boundaries of the genre, emphasizing the drama, characterization, and even philosophic undertones, wrapped up in lavish, widescreen production values that suggest an opulent costume drama rather than a tawdry terror show. Unfortunately, the film (like PHANTOM) was not a success, and subsequent Hammer horrors would retreat to more conventional territory.
The screenplay by Wolf Mankowitz more or less turns Stevenson’s story “The Strange Case of Dr. Jekyll and Mr. Hyde” inside out. Dr. Jekyll (Paul Massie) here becomes a bearded, somewhat anti-social recluse, more at home in his lab than in his home, who (per Nietzsche) dreams of going beyond Good and Evil, not of separating the two. When he transforms it is not into a misshapen monster or a Darwinian throwback (as in the 1932 version with Frederick March) but into a dapper, handsome devil, eager to enjoy all the delights the seedier side of London has to offer. This is a decidedly amoral (as opposed to immoral) Hyde, only interested (at least initially) in the pursuit of pleasure; there is almost a touch of Oscar Wilde about him – which should not be a big surprise, since screenwriters have been using Wilde’s The Picture of Dorian Gray to pad out the details of Stevenson’s slim story at least since the 1920 silent DR. JEKYL AND MR HYDE with John Barrymore.

After seducing a lady snake charmer, Hyde soon grows bored with conventional debauchery, but in the meantime he has learned that Jekyll’s best friend Paul (Christopher Lee) is having an affair with Jekyll’s flirtatious wife Kitty (Dawn Addams), so he sets his sights on her. When neither seduction nor bribery works, he resorts to rape and murder, then frames Jekyll for the crimes. However, after an inquest clears Hyde, Jekyll reasserts himself, transforming in front of the police, who arrest (and presumably go on to try and convict) him for the murders, insuring that Hyde will never be unleashed again.
Hammer horror owed much of its success to brilliant color photography (often by Jack Asher), lavish production design (usually by Bernard Robinson), and clever casting (often with Peter Cushing and/or Christopher Lee), but their best efforts featured solid scripting as well (often by Jimmy Sangster). This is nowhere more true than in TWO FACES OF DR. JEKYLL, which features probably the best screenplay of any Hammer film, written by Wolf Mankowitz (a successful playwright who also co-scripted Val Guests DAY THE WORLD CAUGHT FIRE). The film is filled with witty dialogue and clever characterization that breaks down the usual Good-Evil dichotomy seen in most Hammer movies, which often resembled fairy tales scripted for adults.


To some extent, Jekyll is an unsympathetic personality who (we can infer) drove his wife into an affair because of his inattention to her. Kitty may not be a faithful wife, but she genuinely loves Paul and wants to end the hypocrisy of her marriage; she also has the good sense to find Edward Hyde completely repulsive. Paul is somewhat of a rogue and a scoundrel, but he is also guilt-ridden and remorseful over his betrayal of his friend; he’s just too weak to terminate the love triangle by taking Kitty away from Jekyll. As for Hyde, as the film’s title implies, he really is Jekyll’s alter ego; much of what he does (such as the revenge against Paul and Kitty) makes sense only if we understand that he is simply acting out Jekyll’s repressed impulses – impulses that Jekyll knowingly and deliberately unleashed with his experiments. The result is a highly charged drama, punctuated with mere moments of horror, that plays out like a tragedy, leading to the inevitable moment when Jekyll publicly reveals himself as the man behind the monster.
Director Terence Fisher seizes upon the opportunities in the script, to brilliant effect. Fisher always seemed more interested in the emotional underpinnings of his Gothic films than in the mechanics of suspense: his horror scenes were seldom of the Hitchcockian variety, using multiple camera angles and editing to build tension; instead, he preferred long takes in which the movements of the actors, complimented by subtle movements of the camera, created the dynamic. Shot in widescreen, TWO FACES OF DR. JEKYLL offers a perfect showcase for this directorial approach, providing a large canvas on which Fisher can project all the gaudy elements at his disposal, which fill the frame like a colorful pageant.
Fisher mostly eschews traditional horror elements in favor of emphasizing the moral horror of a conscienceless hedonist completely indifferent to the suffering he inflicts on others. The formerly de rigueur transformation from Jekyll to Hyde is never explicitly shown, taking place mostly off-camera; the only horror comes from Jekyll’s increasing helplessness at stopping the process. Fisher also plays clever little games to underline Mankowitz’s point about hypocritical Victorian distinctions between respectable and non-respectable society. He conveys a certain lusty glory while indulging in depictions of the less respectable entertainments available in London. The film is filled with colorfully costumed extras, including numerous dancing girls in flowery skirts, all captured in an enticing fashion that makes them seem vibrant and exciting. Again, this seems to be a deliberate attempt to undermine Stevenson’s story, wherein Hyde’s Soho shenanigans (implied but not detailed) were clearly meant to symbolize nothing but sin and degradation.
Perhaps the highlight of this approach is the snake charmer’s dance. In an era when explicit depictions of sexuality were not allowed, Fisher managed to give this sequence, laden with innuendo, a galvanic charge as powerful as anything seen in later, more permissive eras. The erotic gyrations, accompanied by exotic music (composed by David Heneker and Monty Norman, the later the creator of the famous James Bond theme) are at once tawdry and refined, sophisticated and suggestive, culminating in a climax wherein the dancer actually takes the constrictor’s phallic head into her mouth (a trick Alice Cooper would adopt in his demented stage show over a decade later)!

The performances are first-rate. David Kossoff is sincere and touching as Dr. Ernst Littauer, an old colleague who warns Jekyll against his experiments and later laments his downfall. Dawn Addams is sharp and seductive as Kitty. Paul Massie does an excellent job in the dual role, capturing the stolid Jekyll with a low voice (aided by a beard and contact lenses to hide his good looks), then bursting forth with vibrancy and gusto as the unleashed Hyde. As the film goes on, his acting strategy becomes perhaps a bit transparent (Jekyll’s strained voice starts to sound artificial), but in the end Massie nonetheless emerges triumphant as the actor who has done perhaps the best job of blurring the lines between Jekyll and Hyde.
But the true scene-stealer here is Lee as Jekyll’s faithless friend, Paul, whose function in the film is to act as a sort of yardstick for Hyde’s debauchery. Paul initially seems like a hopeless reprobate, but his moral failings pale to insignificance when placed against Hyde’s – Lee perfectly captures the sudden sense of moral indignation when Hyde offers to pay off his gambling debts in exchange for an opportunity to sleep with Kitty. Lee was most often give roles (like Dracula) that emphasized his height and his screen presence, often using him more like a prop than an actor, but here he gets to convey a wide range of emotions (love, laughter, lust, and more), ultimately making Paul a sympathetic if fatally flawed human being. This is the one role, perhaps more than any other, that shows Lee capable of giving a genuine character performance, as opposed to being a horror star or a heavy.
When the movie flopped during its initial release, Hammer tried retitling it as “Jekyll’s Inferno” and “House of Fright,” but for some reason the movie never caught on. Perhaps it was too clever, and audiences could not accept the portrayal of a dashing young handsome Hyde (even though this approach was perfectly in line with Hammer’s other success stories, such as turning Lee’s Count Dracula into a seductive sexual predator). In any case, THE TWO FACES OF DR. JEKYLL faded from screens and memories, never attaining the cult-classic status of Hammer’s Dracula and Frankenstein films. This is unfortunate, as the film at least equals those previous efforts in production value – and exceeds them in its screenplay. This is a masterpiece in its own right – and not merely a genre masterpiece. As a horror film, TWO FACES OF DR. JEKYLL barely ranks on the scare-meter; those looking for shocks and suspense had best seek them elsewhere. But as an exploration of two-faced hypocrisy and the mystery of identity, this ranks as one of the genre’s finest achievements.

A few lines of dialogue have been looped in post-production, apparently in an attempt to please the censors. For example, when Hyde is confronted by a night club bouncer, he says, “Go to the Devil.” The audio recording quality is clearly different from the rest of the dialogue, and the words do not match the lip movements. (Presumably, he originally said, “Go to hell.”)
The film features a very young Oliver Reed as the night club bouncer who tries to shake down Edward Hyde for a little cash.