We should be grateful that mainstream entertainment has evolved enough for an animated tale of a prehistoric family not to be solely defined by how many times the work “rock” is prefixed to other nouns. The new DreamWorks film, THE CROODS, is about a primitive clan — led by cautious father Nicolas Cage — facing their own evolutionary upheavals, including a rebellious teen daughter (Emma Stone), a brainy stranger — he’s got shoes! (Ryan Reynolds), and a little thing called the continental drift. Cinefantastique Online’s Steve Biodrowski, Lawrence French, and Dan Persons saw this fanciful tale of survival, and got together to discuss the awesome production design, the occasionally-serviceable, occasionally-better comedy, and when we’ll see it’s-all-about-family plotting finally collapse from total exhaustion.
Plus: Dan discusses the low-budget horror film, A RESURRECTION; what’s coming to theaters; and Steve vanishes into a temporal rift, only to emerge later in the week for a Laserblast episode.

In a pair-up as enticing as a Reese’s Peanut Butter Cup, GHOST RIDER: SPIRIT OF VENGEANCE combines the rich, nutty goodness of Nic Cage with the tasty junkiness of the Neveldien/Taylor directing team. Transporting Marvel’s tortured, soul-sucking biker to Eastern Europe, the sequel has him joining forces with Idris Elba and Violante Placido to save a young boy from the clutches of Satan — here portrayed by Ciarán Hinds — and his minions. As befits a GHOST RIDER story, much road-based action ensues; as befits CRANK-masters Mark Neveldine and Brian Taylor, much frenetic craziness gets layered onto that.
Cinefantastique Online’s Steve Biodrowski, Lawrence French, and Dan Persons rally together to discuss whether the Neveldine/Taylor style is enough to overcome the script’s stock elements, and whether even the extensive depth of the 3D screen is enough to accommodate a Nic Cage performance. Also: Steve gives his capsule review of THE SECRET WORLD OF ARRIETTY; and what’s coming in theaters and on home video.

Mark Neveldine and Brian Taylor, the directors of GHOSTRIDER: SPIRIT OF VENGENCE, admitted to MTV that they’re not exactly sticking to the spirit of the Marvel Comics that inspired the character of Blackout, played in the film by Johnny Witworth.
The character in the film will be a mortal villain who is transformed by the Devil (Ciaran Hinds) into Blackoutbook, a demonic creature with powers that “cancel out” the Ghostrider (Nicholas Cage).
In the Ghostrider comics, Blackout was a human-demon hybrid, cursed from birth. A light-sensitive albino, the character had superhuman strength and speed, and the ability to negate all light in the area around him. He had metal fangs and claws, with the implication that these were mechanical implants the product surgery at some point in his lifetime.


Co-director Brian Taylor revealed “We didn’t really honestly do a lot of research into the comic book version of Blackout… We kind of just took the visual of him and went from there.”
Well, it’s a honest admission, at least.  It remains to be seen whether the decision will adversely affect the film’s box office in a significant way. Certainly, it will alienate hard-core fans.


From Empire magazine via SuperheroHype comes these two official (one presumes) pictures from GHOST RIDER: SPIRIT OF VENGEANCE.

Due out Feb, 17th, 2012 from Columbia Pictures Studio, the film is not a direct sequel to 2007’s GHOST RIDER, but a kind of “soft reboot”, keeping lead actor Cage, taking place “eight years later”, but more or less ignoring the details of the first film.
Shot in various Eastern European  locations, notably Romania and  Turkey, it remains to be seen if the relatively modest-budgeted film will find more favor with fans than the inital cinematic outing. 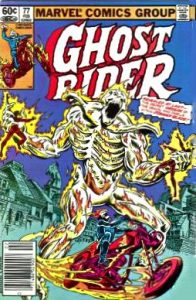 One seems to have a tattooed forehead.
Whatever directors Mark Neveldine and Brian Taylor have in mind for the screenplay by Scott M. Gimple and Seth Hoffman screenplay (from a David S. Goyer story) , GHOST RIDER: SPIRIT OF VENGANCE promises to have a different vibe than it’s predecessor.
Due out February 17th, 2012 from Columbia Pictures and Hyde Park Entertainment.

Nic Cage’s latest, SEASON OF THE WITCH — about two knights who seek to redeem themselves for their participation in the Crusades by transporting an accused witch to a monastery for trial — has been roundly burned at the stake by most critics. But is this film truly deserving of such condemnation? Heedless of the warnings, CFQ’s Steve Biodrowski, Lawrence French, and Dan Persons have braved exposure to the first genre film of 2011 and emerged, if not enriched, then at least more entertained than any of them expected. In this episode they discuss what works, what doesn’t, and whether it’s time to end the pile-on on Mr. Cage’s career.
Also on the slate: news and theatrical and home video releases. Click on the player to hear the show.