It was only yesterday that I was waxing enthusiastic about the restored conclusion of HORROR OF DRACULA, available on a Region 2 Blu-ray disc that incorporates previously missing footage rediscovered on an old Japanese print in an archival vault in Tokyo. Now, I am starting to have reservations, thanks to a YouTube post showing the last reel of the film as it appears in the Japanese print – revealing that the Blu-ray restoration is not complete. One or two of the effects shots seems slightly longer, but that is not the tragic omission. That would be the alternate take of Christopher Lee (as the Count) with tears of defeat welling in his eyes as Van Helsing (Peter Cushing) forces him inexorably into the sunlight that will disintegrate him.
Why was this shot omitted? I cannot say. It was certainly well known that the restoration would not use the complete reels from the Japanese print, which was heavily damaged (as you can see from the video). Instead, the restoration used a previously available print and inserted only a few seconds of missing footage from the Japanese version, the image of which had to be carefully tweaked. This led to timing issues: the sequence had to remain the exact same length so that the picture would stay in synch with the musical cue on the soundtrack.
Still, this hardly explains the omission. The sequence of cuts remains the same; there is a reaction shot of Lee in the place where the missing footage could have been inserted as a replacement. Something similar happened with Cushing: one of his reaction shots from the censored version (which, strangely, was a repeat of a shot seen a few seconds before) was replaced with a restored reaction shot that better displayed Van Helsing’s revulsion at the sight of Dracula’s destruction. Why a similar service was not performed to restore Lee’s performance is a mystery.
And a sad one, too. Lee has always been vocal about trying to retain a faithful concept of the character as written by Bram Stoker in his 1897 novel, which ends with Dracula displaying an expression of peace on his face just before his body dissolves into dust. The condensed story-telling of HORROR OF DRACULA allows little leeway for subtle characterization, but in this one shot we see Lee inject a startling moment of humanity into the Count. The grizzly special effects lose their “ain’t-it-cool” visual abstraction as Lee turns the scene into a credible depiction of a sentient being’s horrifying death.
And it hurts! Not just Dracula – it hurts the viewer as well. For a brief moment, Lee (an actor too often dismissed one-dimensional) engenders a little sympathy for the devil.
Update: The YouTube video referenced in this article appears to have been deleted, presumably for copyright reasons.

It’s another weekly round-up of news, events, and home video releases at the Cinefantastique Round Table, the podcast with a Sense of Wonder. Dan Persons, Lawrence French, and Steve Biodrowski focus their interocitors on what’s happening in the world of horror, fantasy, and science fiction cinema, including a review of Walt Disney Home Video’s TANGLED Blu-ray disc, which comes out next week. Also on the table for discussion: a fond farewell to actor Michael Gough, a fine character who appeared in numerous genre films, ranging from HORROR OF DRACULA (1958) to SLEEPY HOLLOW (1999). Plus previews of the week’s upcoming theatrical releases. 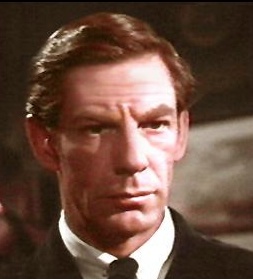 
On UK television, he was also a familiar face.  His genre credits include SHERLOCK HOLMES (1955),  ROBIN HOOD, THE AVENGERS (first in 1965, as the inventor of the Cybernauts) DOCTOR WHO (playing both the Celestial Toymaker [pictured ]and the in the `80’s Time Lord Councilor Hedin), THE SAINT, THE CHAMPIONS, MOONBASE 3, BLAKES 7, THE LITTLE VAMPIRE (1986), and the ADVENTURES OF YOUNG INDIANNA JONES.
Michael Gough had been retired from on-screen work, but did voice acting for THE CORPSE BRIDE, ALICE IN WONDERLAND, and the soon to be released ALL-STAR SUPERMAN.