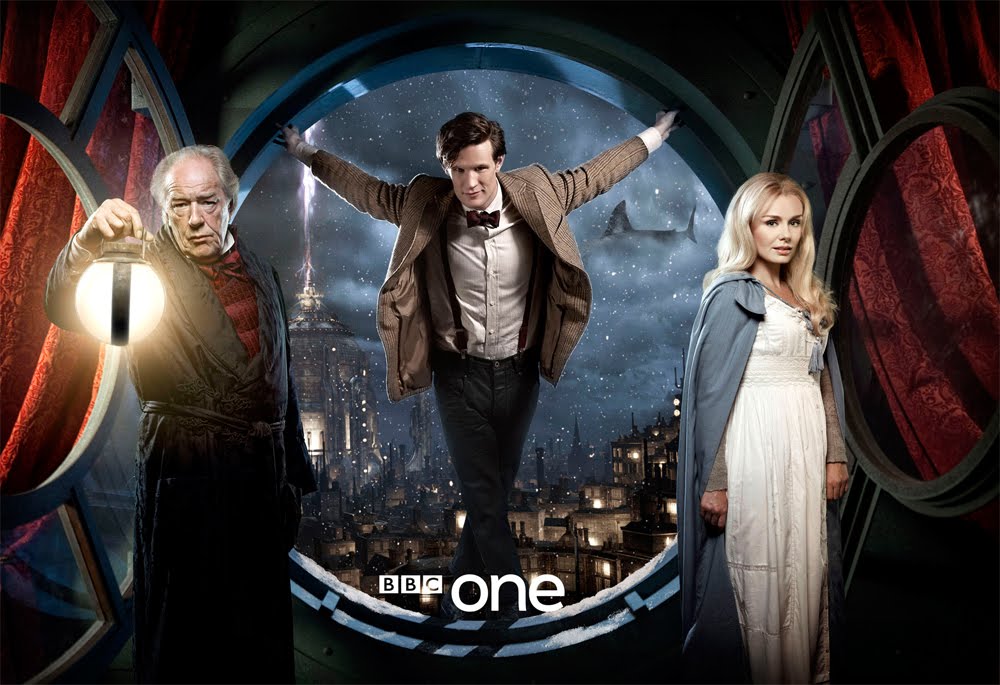 BBC America announced that it will be premiering the DOCTOR WHO Christmas Special A Christmas Carol on the same day it airs in the UK—Christmas Day!

BBC AMERICA TO PREMIERE
DOCTOR WHO SPECIAL ON CHRISTMAS DAY


Newlyweds Amy Pond (Karen Gillan) and Rory Williams (Arthur Darvill) are joined by Harry Potter’s Michael Gambon and Opera diva Katherine Jenkins, for what may be the Doctor’s most Christmassy adventure yet.
Lead Writer and Executive Producer, Steven Moffat, commented on the upcoming special: “Oh, we’re going for broke with this one. It’s all your favorite Christmas movies at once, in an hour, with monsters. And the Doctor. And a honeymoon. And … oh, you’ll see. I’ve honestly never been so excited about writing anything. I was laughing madly as I typed along to Christmas songs in April. My neighbors loved it so much they all moved away and set up a website demanding my execution. But I’m fairly sure they did it ironically.”
Perry Simon, General Manager, Channels, added: “Doctor Who has become a key part of the BBC AMERICA schedule, and having the opportunity to air A Christmas Carol on Christmas Day is like receiving our very own holiday gift. The Timelord may travel through time and space, but he’s certainly found a home at BBC AMERICA.”
Doctor Who is currently filming in Utah for next season’s two-part premiere set in the U.S. during the late ‘60s. Matt Smith, Karen Gillan, Arthur Darvill, Alex Kingston and guest star Mark Sheppard are all in production stateside. The next season premieres spring 2011 on BBC AMERICA.
In the run up to A Christmas Carol on Christmas Day, BBC AMERICA will be running a marathon of the series, beginning at midnight on December 24 and leading up to this year’s special. The marathon includes previous Christmas specials and a selection of favorite Doctor Who episodes from recent seasons.
Christmas Day will also see the premiere the Doctor Who Prom, a live concert featuring stars Matt Smith, Karen Gillan and Arthur Darvill as hosts. The Doctor Who Prom was filmed earlier this year at the world renowned Royal Albert Hall and features appearances from the Weeping Angels, Daleks and the TARDIS. The BBC National Orchestra of Wales, who record the soundtrack for the series, present a selection of intergalactic music – including Murray Gold’s music from the TV show, plus a selection of classical favorites.
Fans can catch up on the new Doctor’s first season with Doctor Who: The Complete Fifth Series Blu-ray and DVD, both are now available in stores.

From the DOCTOR WHO: The Complete Fifth Series Limited Edition Box Set (available from the CFQ Store, ) come two “Meanwhile in The TARDIS” mini-episodes.
Shot especially for the DVD, and written by writer/producer Steven Moffat, they fill in some humorous gaps of the Doctor (Matt Smith), and companion Amy Pond (Karen Gillan) getting to know each other.


The first vignette is set  between “The Eleventh Hour” and “The Beast Below”.
Amy Pond freaks about a bit about the nature of the TARDIS and the Doctor — who’s heard it all before, but perhaps not as manically.
We’ll post the second one tomorrow.
Via DoctorWhoTV

The BBC announced today that season six of  DOCTOR WHO, which delivered record ratings for BBC AMERICA earlier this year, will open with a spectacular two-parter set in the U.S. and penned by ‘Who supremo’ Steven Moffat.
In the special two-parter co-produced with BBC AMERICA, key scenes will be filmed in Utah for a story set in the late ’60s in which the Doctor, Amy and Rory find themselves on a secret summons that takes them on an adventure from the desert in Utah— right to the Oval Office itself.
Production on episodes one and two of the new season starts in Cardiff this month and Matt Smith, Karen Gillan and Arthur Darvill will then travel to America in mid November to shoot pivotal scenes. They will also be joined by Alex Kingston who reprises her role as River Song.


Showrunner and lead writer, Steven Moffat, said: “The Doctor has visited every weird and wonderful planet you can imagine, so he was bound get round to America eventually! And of course every  DOCTOR WHO fan will be jumping up and down and saying he’s  been in America before. But not for real, not on location—and not with a story like this one! Oh, you wait!”
Piers Wenger, Head of Drama BBC Wales and Executive Producer, added: “Steven’s scripts generally inspire us to go that extra mile – this time we’re going that extra four thousand. Thanks to our friends at BBC AMERICA and to the continuing ambition of our lead writer and production team, the first two episodes of Matt Smith’s second season as the Doctor are going global and look set to become Doctor Who’s most action-packed and ambitious season opener yet”.
The new season follows on from the DOCTOR WHO Christmas special guest starring Katherine Jenkins and Michael Gambon which is due to premiere at Christmas. Season six will start airing on BBC AMERICA in spring 2011 and has been split into two blocks, with the second block airing in autumn 2011. By splitting the series Moffat plans to give viewers one of the most exciting DOCTOR WHO cliffhangers and plot twists ever, leaving them waiting, on the edge of their seats, until the autumn to find out what happens.

As noted above, earlier DOCTOR WHO episodes from the original and revived series (The Gunfighters, Dalek,  Daleks in Manhattan) took place in the United States, and might have even shot second unit footage here.  However,  it’s the first time the principle actors have been in front of the cameras in America. Dalek was also set in Utah, albeit in an underground complex.
The 1996 FOX Network DOCTOR WHO movie with eighth Doctor Paul McGann was set in San Fransisco, but filmed in Canada (Vancouver, BC).

DOCTOR WHO spin-off THE SARAH JANE ADVENTURES, though not currently being shown in the U.S., offered several more tidits about the Doctor’s future.

Sarah Jane Smith (Liz Sladen) was the companion to Doctors 4 & 5. The new season of her own show will feature a guest appearance from the 11th Doctor (Matt Smith). It’s in a two-part episode called  Death of the Doctor, and also features former companion Jo Grant (Katy Manning) who last appeared on DOCTOR WHO with John Pertwee in 1973.

In  Death of the Doctor viewers will see, according to UK site DigitalSpy:
1. Doctors 1, 2, 3, 4, 10 and 11 all make an appearance.
2. There’s mentions of Axons, Azal and Aggedor.
3. “Smells like roast chicken!”
4. The Brigadier is still stranded in Peru, while Liz Shaw is on the Moon.
5. That’s Groske, not Graske.
6. The Doctor doesn’t have to be white. And he can regenerate more than 12 times – a lot more!
7. “You look like someone’s baked you!”
8. Jo Jones (née Grant) has 7 children and (almost) 13 grandchildren.
9. The Doctor might never look back, but Sarah Jane has discovered some interesting things using Google.
10. “Accelerate the weave!”

THE SARAH JANE ADVENTURES airs on the BBC’s CBBC, their childrens’ channel. Though the first season of the fairly charming half-hour shows was broadcast in the US by the fromer Sci-Fi Channel, SARAH JANE is not currently being carried by any nationwide US station.


From DoctorWhoTv we get this list of DOCTOR WHO Teaser phrases and clues for Season 6 of the revived BBC series. 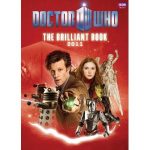 They’re from the Doctor Who: Brilliant Book 2011, now available in the UK from Amazon UK


It seems the latest incarnation of DOCTOR WHO, played by Matt Smith, is engendering some controversy across the Atlantic, due to the short skirts worn by  current travelling companionAmy Pond (Karen Gillan), which are considered “too sexy” by certain Brit viewers. Ms. Gillan is not the only one accused of exposing too much skin: There was also a seen in which Smith appeared clad only in a towel, prompting some fans to complain that they could see the Full Monty – a claim refuted by the BBC. (Smith was wearing “an item to protect his modesty.”)
Defending her character’s wardrobe, actress Karen Gillan points out that Amy Pond’s skirts are standard length for young women of her age:

“I just don’t get it with the skirts. It’s what any girl on the street is wearing. I mean, Amy’s not a schoolgirl, she’s 21, pretty much the same age as me, and we all wear stuff like this.”

Fair enough. However, Gillan goes on to say that Amy Pond is the Doctor’s equal:

“It’s just never occurred to me that a woman wouldn’t be equal, in any sphere, to a man,” she said. “It’s nothing that has ever come up in my life and nothing I’ve thought about in terms of Amy. She’s just a strong girl, woman, whatever. Oh, let’s just say she’s a strong female.”

I’m all for gender equality, so if Amy Pond is going to wear short skirts, I suppose it’s only fair for the Doctor to show up in a towel. However, the issue here is not equality between a man and a women. It’s between a 21-year-old Earthling and a Time Lord who has lived thousands of years. It’s just a wee bit absurd to imagine that anyone from Earth, male or female, could be the Doctor’s equal. The only way we’re going to get gender equality on DOCTOR WHO is if the BBC decides to bring back Romana from the E-Space parallel dimension, where she remained at the end of WARRIOR’S GATE during the Tom Baker era.

During Saturday April 25th’s airing of DOCTOR WHO the BBC ran a cartoon “coming next” promo for their OVER THE RAINBOW reality series, featuring an animated version of UK TV personality Graham Norton.
Unfortunately, it appeared as The Doctor (Matt Smith) was making an impassioned speech during The Time of Angels’ dramatic cliffhanger ending.
Thousands of viewers complained to the BBC, which issued an official apology as to the timing of the incident.
In this video from his BBC One talk show, Graham Norton does his humorous best to make amends to WHO fans.
The Time of Angels’ airs this coming Saturday (May 8th) at 9PM Eastern, followed by SO GRAHAM NORTON.
Now if only viewers in the U.S. could gain some respite from these animated nuisances during our own programs.