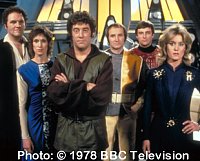 
According to the L.A. Times, the underperforming GREEN LANTERN movie may yet garner a sequel.

Warner Brothers’ chief  Jeff Robinov had the following to say:

“We had a decent opening, so we learned there is an audience.
To go forward, we need to make it a little edgier and darker with more emphasis on action…. And we have to find a way to balance the time the movie spends in space versus on Earth.”

Theres’ already a sequel outline by GREEN LANTERN writers Greg Berlanti, Michael Green and Marc Guggenheim. However, the site says insiders tell them that the studio would likely have the story revised to make it more in line with Robinov’s ideas, if not starting over from scratch with a new script.
They also feel that  Warner Brothers Pictures would likely go with another director, as they felt that Martin Campbell (CASINO ROYALE) was ultimately not a good fit for the cosmic superheroics of the hero and the galaxy-spanning police corps.

In terms of tent-pole superhero prictures, Warners has THE DARK KNIGHT RISES coing out in 2012, and MAN OF STEEL for 2013.  The studio would like to have another DC Comics character film for 2014, and Green Lantern might fit that bill, although apparently they also have a FLASH screenplay that Robinov thinks is “solid”.
Jeff Robinov has long been a supporter of a JUSTICE LEAGUE movie, which might also be a good way to restart a new BATMAN franchise, now that the Christopher Nolan/Christian Bale trilogy is coming to an end.


Somebody notify Kermit: Being green just got a little easier. That’s what happens when the all-powerful will of the universe taps test pilot Hal Jordan (Ryan Reynolds) to be its latest defender, and a dying alien bequeaths him a ring that turns him into the GREEN LANTERN, a mighty force for good with a bitchin’ emerald wardrobe and the ability conjure anything that can be imagined into reality. The new film is Hollywood’s latest attempt to take the comic book movie back to its purer roots, when heroes were heroes, bad guys were malevolent, and the galaxy had the colorful vividness of a two-page splash. Does GREEN LANTERN earn its stripes as simple summer fun? Do Reynolds and Blake Lively (playing Jordan’s boss, wingman, and love interest Carol Ferris) make an appealing screen couple (even as the kids are going, “Yick”)? And what the hell’s going on with Peter Sarsgaard’s forehead? Listen in as Cinefantastique Online’s Steve Biodrowski, Lawrence French, and Dan Persons discuss these and many more issues.

As the June 17th release approaches, Warner Brothers Pictures is cranking up the promo volume for GREEN LANTERN.

“In a universe as vast as it is mysterious, a small but powerful force has existed for centuries. Protectors of peace and justice, they are called the Green Lantern Corps. A brotherhood of warriors sworn to keep intergalactic order, each Green Lantern wears a ring that grants him superpowers.

But when a new enemy called Parallax threatens to destroy the balance of power in the Universe, their fate and the fate of Earth lie in the hands of their newest recruit, the first human ever selected: Hal Jordan.
Hal is a gifted and cocky test pilot, but the Green Lanterns have little respect for humans, who have never harnessed the infinite powers of the ring before. But Hal is clearly the missing piece to the puzzle, and along with his determination and willpower, he has one thing no member of the Corps has ever had: humanity.
With the encouragement of fellow pilot and childhood sweetheart Carol Ferris (Blake Lively), if Hal can quickly master his new powers and find the courage to overcome his fears, he may prove to be not only the key to defeating Parallax…he will become the greatest Green Lantern of all.”


As can be seen, if the lighting isn’t just right, the composite looks pretty unconvincing.

Still not liking the peeled skin look, the feet in particular border on the  laughable, to my taste.

However, it’s servicable, and the distinct CGI look will likely help blend the live action character with the other wholly CGI-animated Green Lantern Corps members from various alien races.
From Breaking News USA, Via Coming Soon.net.

Here’s an abridged clip of the extended trailer from Warner Brothers GREEN LANTERN that was shown at Wondercon this weekend.
This is more like it — previous footage made the film look almost like a romantic comedy about an irresponsible guy who becomes a superhero. This piece has the gravitas that most comic book fans likely desired for this first feature film version of the DC Comics hero.

The trailer features Tomar Re, voiced by Geoffery Rush (PIRATES OF THE CARRIBEAN), as revealed this week.  Mark Strong’s (SHERLOCK HOLMES) Sinestro is a major presence, as is Temuera Morrison’s (THE PHANTOM MENACE) Abin Sur, with glimpses of Peter Sarsgaard’s mutating Hector Hammond.
GREEN LANTERN opens June 17th, directed by Martin Campbell, and screenplay by  Greg Berlanti, Michael Green, Marc Guggenheim, and
Michael Goldenberg.
Not yet rated.
(Video via The GeekGen’s youtube page.)

Not so new, but well worth adding:

Here’s the FULL version of Warner Brother’s actual GREEN LANTERN trailer, as opposed to the ET teaser that we posted this weekend.
The ET teaser seemed to pick clips that played up Hal Jordan’s less admirable qualities, the trailer gives us a hopefully much more balanced view.