Entertainment Weekly offers this first official still of Hugo Weaving as The Red Skull in CAPTAIN AMERICA: THE FIRST AVENGER.
From previous statements, it seems the character’s appearance is a mixture of make-up and digital effects.

Speaking to director Joe Johnston, it appears that one of the themes of the movie is that the Super-Soldier serum tends to bring out the subject’s inner self, transforming the good-hearted Steve Rogers (Chris Evans) into the heroic Captain America, and the Nazi Johann Schimdt into a malignant monster.
This paralleling of Captain America and the Red Skull was also seen in the barely released 1990 CAPTAIN AMERICA film, but Johnston says in the article he never saw that version.
Originally in the comics, the first Red Skull was an American Nazi sympathizer/agent named Maxon who simply wore a mask to conceal his identity.
Eventually his supposed spymaster, the “original” Red Skull was introduced. He was supposed to be Adolph Hitler’s personally-trained protege, the ultimate Nazi—bizzarrely costumed and masked to help instill terror in his subordinates and victims. So good was he at this work, it was said that Hitler himself began to fear the Skull.
Like the Steve Rogers Cap, he survived into the modern day via suspended animation, his name disclosed in time to be the non-descript Johann Schmidt.
During the cold war another Red Skull, retroactively revealed to be the Communist agent Albert Malik, assumed the role. He fought a retconned Captain America successor, and eventually caused the deaths of Peter Parker’s secret agent parents.

On Saturday, February 26 at 2:30pm, at the Samuel Goldwyn Theater (8949 Wilshire Boulevard, Beverly Hills, CA), the Academy of Motion Picture Arts and Sciences presents its fifth annual symposium examining the nominees in the category of makeup and hair styles. This year’s event will be moderated by Makeup Artists and Hairstylists Branch Governor Leonard Engelman. This year’s nominees include Rick Baker and Dave Elsey for their work on THE WOLFMAN. Also nominated are Adrien Morot for BARNEY’S VERISON and Edouard F. Henriques, Gregroy Funk, and Toylanda Toussieng for THE WAY BACK.
Admission is free, but advance tickets are required. Tickets will be available starting February 1.
From the website:

For the fifth year, Oscar Week’s culminating public event celebrates the achievement of the nominees in the Makeup category. This year’s nominees (schedules permitting) will discuss their creative processes and present film clips, photographs and models of their work.

Alien & the Ill-Advised World of Prequels: The Cinefantastique Roundtable Podcast 2:3


Seems that it was a good call, us taking the news portion of The Cinefantastique Podcast and mating it with what had to date been called the Cinefantastique Post-Mortem Podcast. Word that Ridley Scott is turning his scheduled ALIEN prequel into a kinda non-prequel puts Steve Biodrowski, Lawrence French, and Dan Persons in a ruminative mood, prompting a discussion of the cursed genre of prequels, followed by a desperate quest for the handful of “early years” follow-ups good enough to merit actual being watched.
Before that, there’ll be news and discussion of upcoming releases, a couple of listener responses to our SEASON OF THE WITCH review, and some thoughts on the nominees for Best Make-Up Oscars. Plus, many, many tangents and asides. Come join us!

Stan Winston – who built up a company that became one of Hollywood’s top suppliers of high-tech makeup and effects – died on Sunday evening of multiple myeloma. He was 62.
Stan Winston Studios contributed Oscar-winning prosthetic make-up and animatronic effects to such blockbusters as ALIENS, TEMINATOR 2, and JURASSIC PARK. When computer-generated imagery revolutionized the field of special effects, Winston moved with the times, supplying digital effects as well.
Winston sat in the director’s chair on a few occassions END_OF_DOCUMENT_TOKEN_TO_BE_REPLACED

Jack Pierce created the makeup for Universal Studios’ rogue’s gallery of classic movies monsters in the 1930s and 1940s: Frankenstein’s Monster, the Mummy, the Wolf Man, etc. These images are firmly embedded in our minds: even if you haven’t seen the movies, you know what the monsters look like. Some of them have even been immortalized on U.S. postage stamps. In spite of all this, Pierce does not have a star on the Hollywood Walk of Fame. 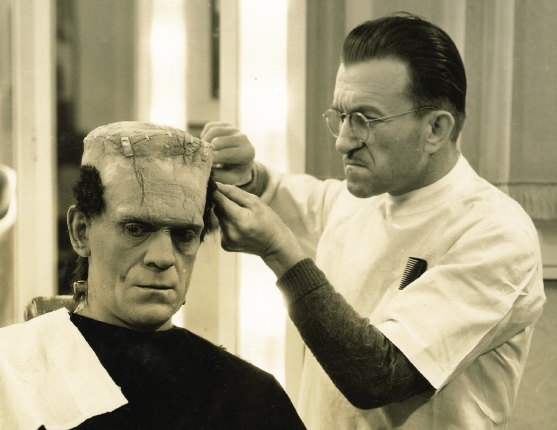 Why this is, I don’t know. Presumably, the difficulty is getting someone to pick up the $5,000 tab for planting a new star in the sidewalk.
Now you have a chance to do something about that: here is a petition asking Universal Studios to fund a star for Jack Pierce. Add your name, and help bestow a little recognition on a man who gave so much to monster fans everywhere.

William Tuttle, one of the pioneering greats in the history of movie monster makeup, has passed away. Tuttle spent most of his long career at Metro-Goldwyn-Mayer, a studio more known for glossy musicals than misshapen monsters, but when the opportunity arose he truly excelled at his work.

One of his earliest jobs was on the 1935 film MARK OF THE VAMPIRE, director Tod Browning’s unofficial follow-up to his earlier hits LONDON AFTER MIDNIGHT (1927) and DRACULA (1931). In it, Bela Lugosi played not Dracula but Count Mora, with a bullet hole in his head to indicate that he had died from suicide. END_OF_DOCUMENT_TOKEN_TO_BE_REPLACED