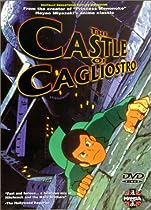 In CASTLE OF CAGLIOSTRO, superb director and future auteur Hayao Miyazaki made a fine film using established characters. Lupin III is a master thief, created as a manga character in 1967, as by the artist Monkey Punch (Kazuhiko Kata), who was inspired by French author Maurice Leblanc’s Arsene Lupin. Lupin III has two loyal sidekicks, a beautiful rival, and he is pursued by the hopelessly frustrated cop Zenigata.
CASTLE OF CAGLIOSTRO, the second Lupin anime feature, is widely regarded as the thief’s best outing, though his exploits continue to this day. CAGLIOSTRO was the first movie directed by Hayao Miyazaki (Princess Mononoke), who had worked on television animation for several years, including an early TV version of Lupin, made in 1971-2.
The Lupin in CAGLIOSTRO is more heroic and, despite first appearances, more responsible than Punch’s ruthless bad-boy. Even if you’re not a fan of the Lupin character in particular or of anime in general, you will have a wonderful time with this rousing, tongue-in-cheek adventure. One of the few smart things the Academy of Science Fiction Fantasy and Horror Films (located in Los Angeles) ever did, was to run CAGLIOSTRO when a print of the Roger Moore opus FOR YOUR EYES ONLY failed to show up for a pre-release screening in 1981. Suffice to say, the assembled crowd of Bond fans were far from disappointed by the last-minute substitution. The tone is light, but the film is fast-paced and filled with enough action to match any good live-action movie, veering into cartoon territory with physically impossible antics that go right over the top in a delightfully absurd way.
Some of the animation looks a bit dated today, but it is more than serviceable in the context of the story, and the backgrounds are all beautifully rendered. Some of the character design, along with the overall look, may raise your hackles if you’re not an anime aficionado (in particular, the princess is a blandly rendered, almost generic character), once the story sucks you in, you won’t care anymore.

Manga’s DVD is a perfect introduction to the character. The print is in beautiful shape, letterboxed into approximately a 1.85 ratio. The soundtrack offers Dolby stereo, with a clear mix that makes the dialogue audible over the music and sound effects (which is not always the case with DVD mixes, especially if you’re not careful with your sound system setup). You have three options for the dialogue: Japanese, Japanese with English subtitles, or dubbed English.
The English dubbing is not terrible, but there is far more zest to the performances in the original soundtrack. Also, the English dub adds unnecessary lines. On some occasions, this apparently was done to clarify story points for younger viewers who might not figure them out on their own (e.g. Lupin mumbles some speculation about his whereabouts when he finds himself in a dungeon beneath the castle). In other cases, the additions are simply inexplicable: a formerly silent scene of Lupin and pal Jigen, getting past a routine check by some border patrol officers, now has Lupin introduce his partner as his relative, as if that somehow convinces the officers to accept the disguises they are wearing.
Another oddity: The film retains the Japanese language credits of the original, although the title is given in English. With the Japanese language soundtrack, the closing credits roll in silence; in the English-language dub, the credits are accompanied by the film’s theme song — which is sun in Japanese! Fortunately, a quick finger on your DVD player’s remote control will enable you to switch soundtracks at the crucial moment and thus avoid the awkward silence.
Unfortunately, the disc is short on extras and supplemental materials; there are none specifically related to the film, to the Lupin character, to Monkey Punch, or to Miyazaki. All the disc has to offer are some trailers and music video-type montages of other Manga video and DVD releases (the same ones available on the Perfect Blue disc). It would have been nice to include at least a little background information on the character, for the benefit of uninitiated viewers.