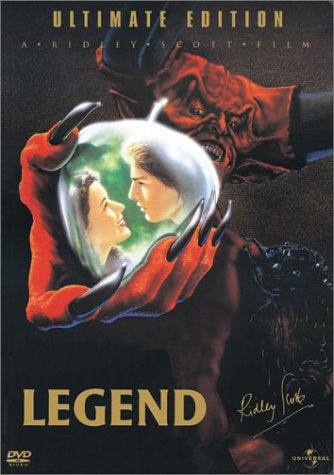 Ridley Scott’s first three feature films (THE DUELISTS, ALIEN, and BLADE RUNNER) earned praise from fans who thought he was a brilliant visual stylist and criticism from those who thought his work was all empty visual flash, with no substance. With LEGEND, he offered up a piece of evidence that seemed to support his critic’s contention: the film is a visually beautiful evocation of a fantasy world (with amazing costumes, sets, and creature makeup), but it is dramatically lifeless, without the sense of wonder that distinguishes masterpieces as diverse as THE WIZARD OF OZ and LORD OF THE RINGS.
Attempting to craft a fairy tale story of Good versus Evil, LEGEND is built around the premise that Darkness (Tim Curry) wants to stop the sun from rising, which involves sending his goblin minions to steal the horn of a unicorn. Darkness also sets kidnaps a beautiful princess (Mia Sara), but Jack O’The Green (Tom Cruise) joins up with a group of elves and fairies to rescue her and save the world.
Ridley Scott’s handling of the material (which was written by William Hjortsberg, author of Falling Angel) seems a bit confused. He uses production design, costumes, lighting, and makeup to suggest a sumptuous world of magic and wonder, but he cannot quite embrace the simple morality of the fairy tale form. Instead, he undercuts it with cheap jokes and modern vernacular in the dialogue. (“Adios, amigos!” cries one unfortunate henchman as he is dragged down into darkness. The line not only fails to get a laugh; it ruins what should have been a dramatic moment.)
There is a hint that the film wants to be a more adult exploration of the darker themes underlying fairy tales  (a la Neil Jordan’s THE COMPANY OF WOLVES), but Scott seems afraid of trespassing too far from the PG rating.* Consequently, LEGEND seems to be set less in the land of the Brothers Grimm than in some kind of cinematic limbo, where characters have neither purity to be simple archetypes nor the depth to be truly believable. Ridley Scott and William Hjortsberg may feel obligated to serve up the happily ever after, but they fail never to create a story wherein the conclusion feels anything but obligatory.
Tom Cruise, a rising star at the time, seems out of place in the fantasy surroundings. The supporting cast is played by some competent character actors, but they seldom get a chance to shine. Annabelle Lanyon (as the Tinkerbell surrogate Oona) shows a flash of fire and passion that makes you wish her character had been emphasized more. Absolutely unrecognizable beneath an excellent Rob Bottin makeup, Robert Picardo is great in what amounts to a bit part as the carniverous witch Meg Mucklebones – a ghastly combination of horror (she wants to each Jack) and humor (showing a hint of vanity, she is distracted by her own reflection in his shield).
The true highlight of the film is Tim Curry’s performance as Darkness. A magnificent, Satanic figure (in another fantastic Rob Bottin makeup), Curry’s dark lord captures the larger-than-life mythic tone better than anything else in the movie, emerging as a memorable portrait of evil.
Because of the strong visuals (and Curry’s performance, which is mostly limited to the final twenty minutes), the film is worth seeing. But it is not the film it should have been, and what’s wonderful about it only makes the failings more painful.

After its initial preview, Ridley Scott recut LEGEND for its European release, from 150 minutes to 94 minutes. The American release was held up a year while the film was recut again, this time to 89 minutes.
The European version of LEGEND was scored by Jerry Goldsmith (who previously worked with Scott on ALIEN); the American version abandons the Goldsmith music in favor of a new score by the German group Tangerine Dream (who also provided music for the Tom Cruise film RISKY BUSINESS). The results were detrimental, to say the least. The Goldsmith music provide something otherwise lacking in the movie: a lively sense of adventure and romance. Although at times effective, the Tangerine Dream soundtrack emphasized what was already there (the weirdness of this exotic fantasy world), making the soulless nature of the film even more obvious.
Both the American and the European cuts of LEGEND begin with Darkness summoning his Blix (Alice Playten, in a make-up designed to suggest a goblinesque version of Keith Richards).

Several scenes in the first and second act are shortened in order to rach Darkness’s lair as soon as possible. The worst example is the already too brief appearance of Meg Mucklebones, who is barely on screen before she is dispatched.
The two versions of LEGEND diverge most sharply after Darkness has been defeated.

Universal’s “Ultimate Edition DVD,” released in 2002, is a double disc set that includes both versions of LEGEND. Despite their different lengths, each is separated in 18 chapter stops, which is not really enough to pinpoint your favorite scenes. Although created in the days before widescreen televisions were the norm, the letterboxed transfers work quite well on a large plasma screen. There are also several bonus features, including an audio commentary, a making-of documentary, trailers, storyboards, and missing scenes.
Disc One features the European cut, with an audio commentary by Ridley Scott, who discusses his influences on the film (including BEAUTY AND THE BEAST) and elaborates on achieving fantasy special effects in the days before computer-generated imagery. He seems particularly proud of a small light dangling on the end of a fishing line, used to represent a fairy, but he admits there is one problem: asking the gaffer holding the fishing pole to make the light move “more like Tinkerbell.”
Disc Two includes the American cut of LEGEND, plus these bonus features:

“Creating the Myth” is an extensive documentary featuring interviews with Ridley Scott, William Hjortsberg, Rob Bottin, Mia Sara, Billy Barty, and several other members of the cast and crew. Having been madeover a decade after the film’s release, it has the benefit of hindsight, which separates from the usual making-of supplemental features scene on most DVDs. Although it deals with subjects in chapters separated by title cards (e.g. “The Storyteller”), “Creating the Myth” is not chapter-stopped, unfortunately. It’s most interest section details the process that went into altering LEGEND for its U.S. release, with Scott claiming he was not coerced by Universal Studios but getting cold feet after a disappointing test screening.
Isolated Tangerine Dream Score: Watching the film this way the may be of some interest to fans. The mix includes extended versions of music that was trimmed for the film (this means the isolated score occassionally goes out of synch with the film), and there are also some alternate tracks not heard in the final mix of the theatrical release. Unfortunately, watching the film without dialogue soon grows wearying, especially as the music drops out at several places, leaving only dead silence. (This feature would have worked much better with some interview comments to fill in the blanks, as Danny Elfman did with his isolated score for the EDWARD SCISSORHANDS DVD.) The worst problem is the ending – a long visual sequence with virtually no dialogue, which is viewed completely in silence, with Tangerine Dream’s music totally missing. (Apparently because Jon Anderson sings a song on top of the music, this was not considered part of the Dream’s “score” for the film.) The problem continues with the closing credits, also in silence, the Bryan Ferry song having been removed. All in all, this feature would have worked better as a separate soundtrack CD, including all the Dream’s music, whether or not it was heard in the film.
Lost Scenes: There are two, neither very interesting.

Storyboards are provided for three sequences: Lily and the Unicorns, Jack’s Challenge, and Downfall of Darkness. The most interesting is the last one, which features sketches of Darkness that more resemble Chernobog in the “Night on Bald Mountain” sequence of FANTASIA than the Rob Bottin makeup seen in the final film. This alternate, unfilmed ending features an interesting surprise: a unicorn (the mate of the one whose horn was stolen) provides the coup de grace to Darkness, impaling him through the chest.
Photo Galleries: There are galleries for Publicity Photographs, Images of LEGEND, and Continuity Polaoids.
Trailers: Two are included, one for the U.S. theatrical release and one for the international release. They seem redundant: except for the Universal Studios logo at the beginning of the U.S. trailer, they are virtually identical.
TV Spots give a good indication of the reason for including the Bryan Ferry song over the closing credits of LEGEND: the song is prominently displayed in two of the four spots, suggesting a music video as much as a movie promo.
Production Notes provide a brief history of the making of LEGEND, up through the fire that destroyed the original forest set (built on the so-called “James Bond Stage” at Pinewood Studios). Each paragraph is nicely illustrated with a still from the movie, but it ends abruptly, and the information mostly repeats what is available in “Creating the Myth.”
NOTE: When inserted into your computer, the DVD prompts you to install “interActual Player,” which promises to allow you to access additional content on the Internet. I’ll stick with my own DVD player – thank you very much.

This well-done DVD presentation is not going to convince anyone that LEGEND is a lost classic, but the film is not without merit, and the discs display its best qualities to good effect. Ridley Scott’s original cut fell short of his intended goal, but the attempt to improve it for American audiences only made things worse. This DVD presentation is worthwhile if only for the chance to see the European cut with Jerry Goldsmith’s score intact; plus, the audio commentary and the documentary provide useful insight  into the filmmaking process and the behind-the-scenes decisions that led to the alteration.
LEGEND (1985). Directed by Ridley Scott. Written by William Hjortsberg. Cast: Tom Cruise, Mia Sara, Tim Curry, David Bennent, Alice Playten, Billy Barty, Cork Hubbert, Robert Picardo.
FOOTNOTE: