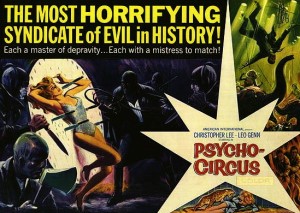 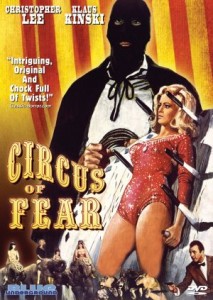 That THE AVENGER (Der Racher) is perhaps mostly a footnote in the history of the West German krimi* film can be attributed to its production circumstances. Rather than being part of the Rialto or CCC series, it was Kurt Ulrich Filmproduktion’s only contribution to the cycle, one that they were not able to follow up on account of Rialto’s proven ownership of the film rights to the Edgar Wallace source novels.
The film nevertheless proved influential in other ways. No fewer than three krimi regulars made their genre debuts: Heinz Drache, Siegfried Schurenberg, and Klaus Kinski. Each also plays the type of role in which they would thereafter typically be cast: the detective, the old duffer, and the general-purpose villain, victim, and/or red herring.
THE AVENGER also features one of the classic Wallace monsters in Bhag (Al Hoosman’s), identified as a giant mute servant from the jungles of Borneo. Variously referred to in the English-language version under review as a “negro”, “a demented creature”, “an animal from the jungle”, and “the best servant in the world: he doesn’t think, he doesn’t speak, he doesn’t answer”, the character also inevitably dates the film as the product of earlier, less politically correct times.
By contrast the film’s self-reflexivity feels modern: The investigation takes place amidst the making of a film, leading to the incidental recording of an apparently insignificant detail that actually prefigures Antonioni’s modernist anti-thriller BLOW-UP by a good half-dozen years. During the shoot, director Jackson also tires of the diva antics of his leading lady, prompting him to promote ingénue and extra Ruth Sanders into the role in a move that recalls Argento’s OPERA over a quarter-century later; it is, as Jackson remarks, the sort of incredible thing which only happens in the movies.
Mostly, however, it’s pretty familiar stuff and, as such, holds up about as well or badly as any of the early 1960s black-and-white krimis: even at the time they presented a curiously anachronistic vision of England that was probably more 1920 than 1960. Paradoxically, however, this means that today they haven’t dated anywhere near as badly as their later colour counterparts, which tried to be swinging and hip – with, for instance, a Scotland Yard man called Sergeant Pepper.


We open in media res. A maniac known as The Executioner has struck on no fewer than 12 occasions. The first eleven victims were career criminals, but the most recent was a gentleman apparently beyond reproach – exactly the thing to spur the authorities into real action in the Wallace universe.
The crimes have at least given special investigator Michae Brixan (Heinz Drache) some clues to work with: The killer is extremely strong, having beheaded his victims with a single blow from a heavy blade; uses a typewriter on which a couple of the keys are distinctively out of alignment, and posts cryptic messages in the newspaper under the name of “the Benefactor”.
Posing as a journalist sent to cover the making of the film within the film, Brixen soon has a number of suspects, including Bhag – albeit probably only as the instrument of his white master Sir Gregory Penn – and Kinski’s neurotic screenwriter, Voss, whose typewriter appears to have been used for writing the Benefactor’s messages.
In the usual fashion, this surfeit of suspects only serves to complicate things. So too do the typically quirky supporting characters, like harmless old eccentric Longman and a swordsman who seems to have stepped out of a Chinese wuxia film (one especially ‘what the!’ moment here is vaguely reminiscent of Juan Piquer Simon’s PIECES, of all things). There is also the inevitable romantic subplot-complication that develops between the investigator and the ingénue.

THE AVENGER’s director Karl Anton was a veteran whose career dated back to the 1920s. If this implies a certain competence and familiarity with the expressionist idiom, his style also comes across as somewhat old-fashioned in the main, though he does use the zoom lens to augment the shock of finding a severed head in a box on a couple of occasions.
In sum, THE AVENGER is perhaps not the prime example of a 1960 krimi film – that surely remains DEAD EYES OF LONDONG, which also showcases the talents of Alfred Vohrer, a more prolific krimi director – but THE AVENGER certainly deserves to be better known and given the restored DVD treatment.
THE AVENGER (Der Rache, 1960). Directed by Karl Anton. Screenplay by Gustav Kampendonk & Rudolf Katscher, based upon the novel by Edgar Wallace. Cast: Heinz Drache, Ingrid van Bergen, Benno Sterzenbach, Ina Dusha, Ludwig Linkmann, Siegfried Schurenberg, Kalus Kinski, Rainer Brandt, Friedrich Schonfelder, Al Hoosmann.
FOOTNOTE: