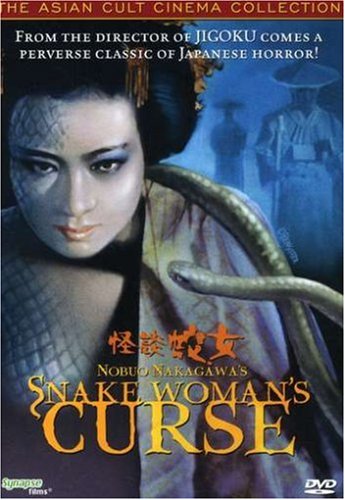 This 1968 effort is the last in a series of kaidan eiga (ghost story movies) filmed by director Nobuo Nakagawa during a classic period that began in 1956 with THE VAMPIRE MOSTH (Kyuketsuki-ga). SNAKE WOMAN’S CURSE (Kaidan Hebi-Onna, literally, “Ghost Story of the Snake Woman”) is frankly not quite up to the standard of his earlier work, which includes the classics THE GHOST STORY OF YOTSUYA (Tokaido Yotsuya Kaidan – i.e., “The Ghost Story of Yotsuya in Tokaido,” 1959) and JIGOKU (“Hell,” 1960); however, the film does include many of the stylist elements that established Nakagawa as Japan’s premier director of horror films. Fans of Japanese cinema, particularly Japanese horror cinema, should find it interesting; others will be put off by the slow pacing and occasional cornball moments.
The story is set during a period when Japan was undergoing a period of “Westernization” – a process that does not extend to the small coastal village where the action takes place. After the death of a poor farmer (who vowed he would work all his life and “even eat dirt” to retain his land), an indifferent overlord repossesses the farm and puts the dead man’s family to work in his house as servants. The widow (who previously nursed a wounded pigeon back to health) objects to the killing of a snake, is kicked down by the lord, and dies from a crack on the head. The daughter is raped by the lord’s son, then commits suicide. The daughter’s lover seeks revenge but falls off a cliff when hounded by the lord’s men. The lord, his wife, and their son are haunted by visions of ghosts, which drive all of them to their deaths. Have achieved retribution, the ghosts of the dead peasants are seen walking across a foggy plain toward the sun, apparently heading toward the afterlife. END_OF_DOCUMENT_TOKEN_TO_BE_REPLACED